Hope for an American jump to the left 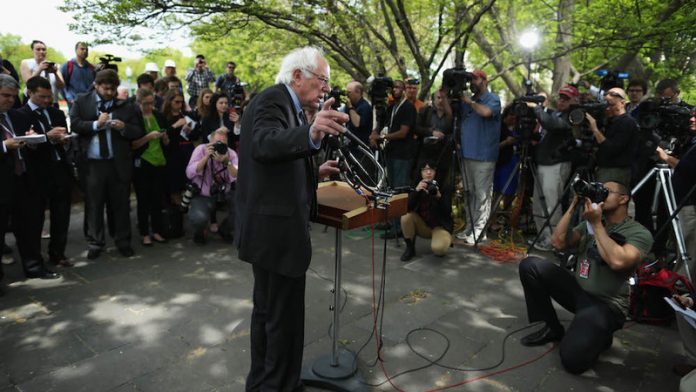 Nothing highlights Washington’s sceptical view of the political left like the arrival of Bernie Sanders in the presidential race.

The independent senator from Vermont is typically dismissed as a “self-described socialist” by those who doubt the United States’s appetite for policies seen as mainstream in much of the world, but long regarded as almost unmentionable in the land of the free.

Although even his biggest fans don’t necessarily expect to see the 73-year-old maverick waltzing into the Oval Office anytime soon, his decision to challenge Hillary Clinton for the 2016 Democratic nomination coincides with rising optimism that their focus on income inequality and campaign finance reform is catching the national mood.

“There is a reason why it’s called economic populism: it’s because it’s popular,” said Charles Chamberlain of Democracy of America, whose one million activists support Sanders and the more reluctant Massachusetts senator, Elizabeth Warren, whom they are also encouraging to run.

“It’s a real stretch to say [Sanders] is out of the mainstream; he is very much ahead of the curve when it comes to a lot of politicians in Washington,” Chamberlain said. “It is Washington, DC, that is out of touch with where the average American is really at.”

For this reason, many progressive activists rankle at the description of their members and favoured candidates as left wing. “I don’t call ourselves ‘left’ and part of the reason is the centre of the country agrees with us,” said Adam Green, cofounder of the Progressive Change Campaign Committee.

Mainstream views
He said the surprising decision of Clinton to champion many of the same themes as Warren and Sanders showed such views were now mainstream among Democrats, and the only question was how forcefully Clinton would follow through with policy.

“The shift in direction of the Democratic Party is now coming to a close with the victory of the Warren wing,” Green said. “It is now about a scale – do we go big or settle for smaller changes?”

It is certainly true that Clinton’s apparent conversion from avowed centrist to critic of the economic elites has caught many by surprise.

“Back in December, people on her campaign staff were saying she was going to run against gridlock, for bipartisan solutions, and that’s certainly not what’s happened. Since she has launched, it’s all about the middle class and making the economy work for everyone and a system that’s rigged,” Chamberlain said. “We believe that the issue of income equality is going to be the dominant fight of the 2016 election … and we are seeing that.”

It also coincided with a shift among leading Senate Democrats, such as Harry Reid and Chuck Schumer, who many had long regarded as irredeemably part of the Washington establishment.

A few weeks ago only seven senators were openly fighting for enhancing the social security safety net, and many favoured instead the conservative entitlement reforms sought by Republicans and briefly endorsed last year by the White House too. Now 42 out of the 44 Senate Democrats are preparing to vote to expand social security.

Similarly, Schumer is supporting legislation seeking to eliminate student debt at public universities, a key aim of progressive activists that may yet be adopted by Clinton.

But more radical activists on the left caution that there is a limit to how far mainstream Democrats will join Sanders in espousing truly transformational policies, such as a constitutional amendment to strip corporations of political power sought by groups such as Move to Amend.

Marching orders
“The politicians who are taking their money and therefore their marching orders from the super Pacs [political action committees] and the billionaire class and Wall Street are not going to champion the kind of change that Move to Amend is demanding,” said its spokesperson, the former Green Party presidential candidate David Cobb. “We are moving the needle in that we are forcing some of the most dominant political players to say the things that they have not been saying, but I have no illusions that they are going to champion the systemic transformational change that a real democracy movement would require.”

Optimism on the left is also tempered by memories of even greater exuberance before Barack Obama was elected. “That’s what you saw in 2008,” Chamberlain said. “People wanted bold change, and in some ways we got it and in other ways people were disappointed.”

For groups hoping to mobilise the much-vaunted but often elusive grass roots, lasting change requires more than just one person or a party hierarchy to change its rhetoric. “This mistake that is often made is the idea of the great person theory … or to look at party apparatus. Instead, the question is: Is there a mass movement in this country that is cohering?” Cobb said. “Take the growing resistance to the schools-to-prison pipeline, take the justifiable anger at rising inequality … and you begin to see the recipe for that movement.

“What we are beginning to see between [the anti-police violence movement] Black Lives Matter, between the [immigration] Dream defenders [and] Move to Amend … you see all these early stages of a movement that is beginning to speak the same basic language.”

The bigger hope for activists like Cobb is that such a movement may also transcend left-right boundaries and appeal to disillusioned Republicans too. But for now, many would settle for a world where Bernie Sanders was not the only Washington politician prepared to identify himself as left wing. – © Guardian News & Media 2015

Heralding what he called “the most unusual political career in the US Senate”, 2016 Democratic presidential candidate Bernie Sanders has called for “a political revolution” against “the billionaire class”.

He seemed to include the favourite for the Democratic nomination, former secretary of state Hillary Clinton, in that “billionaire class”.

Appearing on ABC TV after a week in which he declared a run for the Democratic nomination well to the left of Clinton, the independent senator from Vermont said on his first day as a candidate he’d attracted 100 000 supporters and raised $1.5-million at an average donation of $43. The self-described socialist aimed his fiercest fire at the influence of bigger money.

“For the last 30 years I’ve been standing up for the working families of this country. I think I’m the only candidate prepared to take on the billionaire class, which now controls our economy and increasingly controls the political life of this country.

“We need political revolution in this country involving millions of people prepared to stand up and say ‘enough is enough’ – I want to lead that.”

Asked by host George Stephanopoulos to comment on continuing controversy over foreign donations to the Clinton Foundation and their alleged influence over decisions made by the former secretary of state while in office, Sanders said: “It’s not just the Clinton Foundation. My concern … [which] should be the concern of every American [is] can somebody who isn’t a billionaire, who stands for working families, win an election into which billionaires are pouring millions of dollars?”

Sanders outlined policy positions, saying that, if successful, he would make the wealthiest corporations pay a fair share of taxes. He would also tackle climate change and oppose international trade agreements.

Asked whether it was possible that “someone who calls himself a socialist” could win election to the White House, he said: “Of course, if we know what democratic socialism is.”

He added: “If we know that countries [such as] … Scandinavia, Denmark, Norway and Sweden … are very democratic countries – the voter turnout is a lot higher than in the United States – and in those countries healthcare is a right, college education and graduate school is free, retirement benefits and childcare benefits are stronger … and in those countries government works for ordinary people and the middle class rather than, as is the case right now in our country, for the billionaires.”

Sanders added: “Few would argue that [mine] is the most unusual political career in the US Senate. Nobody thought I would be elected mayor of Burlington, Vermont. Very few people thought I would beat an incumbent Republican to become a US congressman for Vermont by 16 points. And people weren’t so sure I could beat the richest person in Vermont to become a US senator.