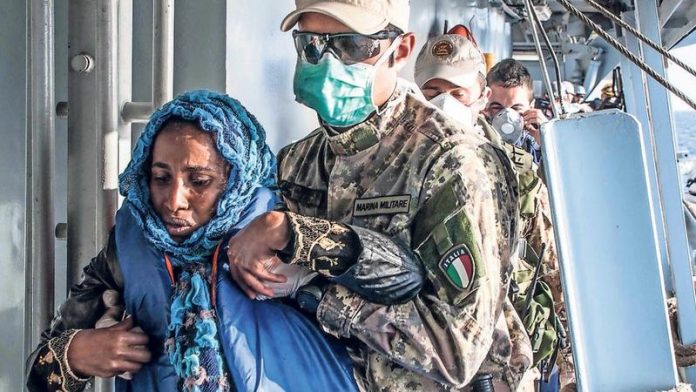 The European Union’s executive body is to unveil radical new proposals on immigration, imposing migrant quotas on the 28 countries of the union under a distribution “key” system set by Brussels.

The plan, which is supported by Germany and will be fiercely resisted by Britain’s new Conservative government, will be launched by the European commission on Wednesday in response to migrant boats crisis in the Mediterranean.

The bold move by Brussels comes as the EU draws up plans for military attacks in Libya to try to curb the flow of people across the Mediterranean by targeting the trafficking networks. The EU’s top diplomat is to unveil an attempt on Monday to secure a UN mandate for armed action in Libya’s territorial waters.

Britain is drafting the UN security council resolution that would authorise the mission, senior officials in Brussels said. It would come under Italian command, have the participation of about 10 EU countries – including Britain, France, Spain and Italy – and could also drag in Nato, although there are no plans for the initial involvement of the alliance.

While there is broad support within the EU for the military plans, the proposals for sharing the immigration burden are highly controversial and divisive.

The policy document, obtained by the Guardian, demands new and binding rules establishing a quota system of sharing refugees among the member states.

The migration agenda declares: “The EU needs a permanent system for sharing the responsibility for large numbers of refugees and asylum seekers among member states.”

By the end of the year, Brussels is to table new legislation “for a mandatory and automatically-triggered relocation system to distribute those in clear need of international protection within the EU when a mass influx emerges”.

The proposals will lay bare deep divisions between national governments over immigration, with the German chancellor, Angela Merkel, backing the scheme and Britain leading the resistance.

Germany and Sweden between them take almost half the asylum seekers in the EU and Berlin is predicting that the numbers this year could almost double to about 400 000 in Germany, two-thirds of the total number in the EU last year.

The commission paper says: “Some member states have already made a major contribution to [refugee] resettlement efforts. But others offer nothing.” It also insists that Europe has to open up legal avenues for migrants to enter the EU safely, a notion that is strongly opposed by Theresa May, the home secretary.

“Such vulnerable people cannot be left to resort to the criminal networks of smugglers and traffickers. There must be safe and legal ways for them to reach the EU,” the document says.

He said: “The European concept of ‘someone letting immigrants into their country’ and then ‘distributing’ them among the other member states is a mad and unfair idea.”

Brussels is proposing to invoke emergency mechanisms by the end of the month that will oblige the 28 countries to share the numbers of “persons in clear need of international protection” and “to ensure a fair and balanced participation of all member states to this common effort. This step will be the precursor of a lasting solution”.

The blueprint, to be unveiled by Dimitris Avramopoulos, the EU commissioner for migration, home affairs and citizenship, includes a distribution key system based on various criteria, from national wealth levels to unemployment rates, to determine what proportion of refugees each of the 28 countries should admit.

In New York on Monday, Federica Mogherini, the EU’s foreign and security policy co-ordinator, is to brief the UN security council on the plans for a chapter seven resolution authorising the use of force in Libya. The British draft is believed to call for the “use of all means to destroy the business model of the traffickers”.

This would entail EU vessels entering Libyan territorial waters, including the Royal Navy’s flagship HMS Bulwark and its three Merlin helicopters currently in Malta, and deploying helicopter gunships to “neutralise” identified traffickers’ ships used to send tens of thousands of migrants from sub-Saharan Africa and the Middle East on the short but highly risky voyage from the Libyan coast to the shores of southern Italy.

Libyan militias, jihadi groups and Islamic State (Isis) affiliates, which are believed to be in cahoots with the trafficking networks, are said to have heavy artillery and anti-aircraft batteries deployed near the coast. Attacks on EU vessels and ships could trigger an escalation and force Nato to get involved, policymakers in Brussels said.

Following a visit to Beijing last week, Mogherini believes the Chinese will not block the mission in the security council. Her staff are also confident that Russia can be persuaded against wielding its security council veto despite the intense animosity between Moscow and the west over the Ukraine conflict.

The Italian government, which is leading the drive for military action and would command the mission, to be headquartered in Rome, said at the weekend that the Russians are “ready to cooperate”.

Libya’s ambassador to the UN, Ibrahim Dabbashi, told the Associated Press that he had not been consulted on the plans and opposed them.

Following intensive talks over the past week in Brussels, six EU states have committed to taking part, with several more expected to offer participation. All 28 member states are said in Brussels to support the proposed campaign.

The plans will be discussed by EU foreign ministers next week and put to an EU summit next month. – © Guardian News & Media 2015