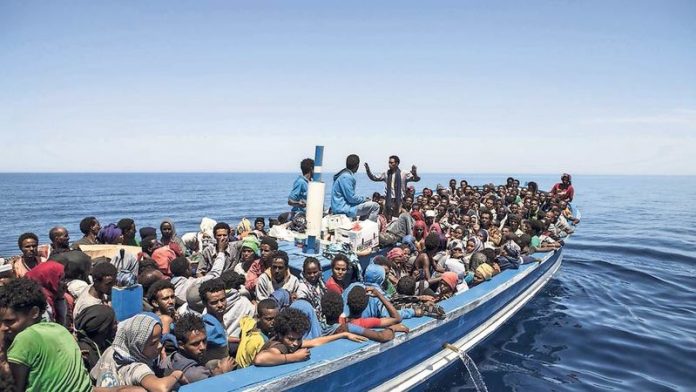 When the 17-year-old boy, who had been locked in a house for months near Sabha in Libya, said his family in Côte d’Ivoire could not pay for his release, his captors showed no mercy.

“They tortured us to force us to call our relatives to extort money from them. If you don’t pay, you don’t go out … I told [the head of the ‘prison’] that I did not have any family members, that all of them had died. He answered: ‘You will join them in death if you don’t pay.’ I started crying, and so they started beating me with a belt and a broomstick,” he said.

The teenager’s story was included in an Amnesty International report documenting abductions, torture and other abuses by smugglers and armed groups in Libya. The rights group said these horrors are driving many refugees and migrants to “risk their lives in treacherous sea crossings in a desperate attempt to reach safety in Europe”.

The chilling testimonies were released as the European Union struggles to tackle the growing number of people attempting to cross the Mediterranean from Libya.

Amnesty warned that efforts to destroy smugglers’ vessels before they are used could leave migrants and refugees trapped in a conflict zone, and it urged the EU to deploy the promised rescue vessels swiftly where they are needed most, as well as to offer more resettlement places.

Amnesty carried out 70 interviews between August 2014 and March this year. As well as newly arrived migrants, it found that people from established migrant communities in Libya were seeking to flee the growing lawlessness.

The young Ivorian arrived in Sicily last June; he said the smugglers, who had helped him get into Libya in March 2014, handed a group of migrants over to an armed group, which imprisoned them in a three-storey house for months. The teenager said the “prison” was run by Libyans but that Ghanaians were also working there.

Mohamed, a Somali refugee interviewed in Sicily in April, said his group had entered Libya through the Sahara.

“In the desert, Libyan men were forcing, torturing us, beating us with swords, guns, stones, Kalashnikovs. They would beat us every day. They broke my finger, a friend had [a] broken arm. We couldn’t escape. My friend Mohamed tried to escape and was shot dead. Another man was hit on the head with a stone and died … I stayed one month, then paid. My mother’s brother is in Holland; he paid,” he said.

A Nigerian woman told Amnesty she was gang-raped when she arrived in Sabha in December 2012, after five armed robbers had abducted her and her husband.

“They took us to a far place outside the city in the desert. They tied my husband’s hands and legs to a pole and gang-raped me in front of his eyes,” she said.

Amnesty found that abuses were not confined to desert areas but included major cities. The researchers were also told of abuses in immigration detention centres among migrants and refugees, including children. One woman said officials at one centre had beaten a pregnant woman to death.

“The international community has stood and watched as Libya has descended into chaos since the 2011 Nato military campaign ended, effectively allowing militias and armed groups to run amok,” said Philip Luther, Amnesty’s director for the Middle East and North Africa. “World leaders have a responsibility and must be prepared to face the consequences, which include greater levels of refugees and migrants fleeing conflict and rampant abuse in Libya.” – © Guardian News & Media 2015