Namib may offer secret to life on Mars 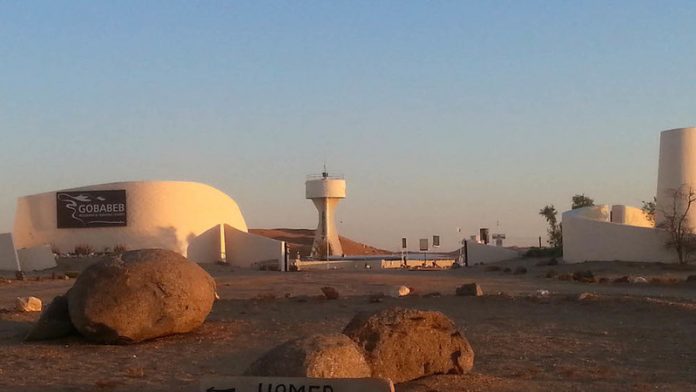 Nothing stirs on the grey, arid plains of the Namib Desert – there are no trees or shrubs in this part of the Namib, only long stretches of sand baking under the merciless sun. This is one of the most extreme environments on Earth, with very little water and temperatures and unrelenting solar radiation that would kill most animals.

But hidden under the rocks there is life – a thin green-blue layer of cyanobacteria, a type of bacteria that converts the sun’s light into energy. These tiny microbial communities, sometimes known as extremophiles, are one of the pointers in our research into life on other planets.

Dr Jean-Baptiste Ramond, a research fellow at the University of Pretoria’s Centre for Microbial Ecology and Genomics, pulls the 4×4 over to the side of a dirt road that disappears into the horizon behind us and into a heat mirage in front of us.

He crouches down over a small quartz pebble and turns it over. On its underside is the tell-tale sign of these particular extremophiles: a moist mixture of sand and green bacteria. “They live under rocks, like this,” Ramond says, pointing to the dark smudge on the rock.

“They are protected from the high radiation, but they also have light coming through. They are able to do photosynthesis [convert the sun’s energy into chemical energy] and you have this mini-ecosystem that creates what is like an oasis in the middle of nowhere.”

Cowan, who has undertaken research in deserts around the world, including Antarctica, says that this springs from his “inherent fascination in how life adapts … no matter how extreme it is”. “The fact that the soil is dry for 51 weeks of the year and temperatures at the surface [of the soil] of up to 60 to 65 [degrees] centigrade doesn’t prevent microbial life from occurring here, and I’d like to know what’s there, what it’s doing, how it survives and how it has adapted to survive,” he says.

In one of his experiments, Cowan has laid out a selection of tiles – which let through differing amounts of light – in three different sites in the Namib, some of which get more water than others. Over the next eight years, he will check to see how much light and water are needed for these hypolithic communities to develop.

Chris McKay, a senior scientist at Nasa’s Ames Research Centre in California who has been going to the Namib, specifically the Gobabeb Research and Training Centre, for many years, told the Mail & Guardian that he is not interested in the desert ecology, but rather in its role “as a guide to life in desert worlds like Mars”. The hypoliths could hold the secret to life on other planets.

“We’re interested in extremophiles … because of their implications for astrobiology,” says McKay, whose work focuses on desert systems, including the Namib and the Atacama Desert in Chile. “For life, there must be an organism at the base of the food chain, a primary producer. In the deserts, we focused on photosynthesis … the ability [of organisms] to produce biomass in the desert. Not importing it, but producing it locally.”

On Mars, there is nowhere to “import” these base organisms from, so that is why scientists are looking at how they survive on Earth in these extreme environments.

“We use those environments and those conditions and organisms as analogues to try and understand what we might find on other planets, such as Mars,” says Kim Warren-Rhodes, an astrobiologist at Nasa and the Seti Institute (a group of organisations searching for extraterrestrial life).

“We also use the information and data – the science that we get – to teach rovers how to look for those organisms, habitats and biosignatures on other planets,” she says.

Comparing deserts
Her research focuses on deserts such as the Namib and the Atacama. “How these organisms eke out a living on a very, very little bit of water is interesting and comparing the two deserts is helpful in understanding what are the patterns of life.”

These patterns could give scientists an idea of where to look for life on other planets. “For example, do we need to dig down below in Mars? Do we need to look for organisms that may be able to survive on little bursts of possible water?” Warren-Rhodes asks. “[It could also point us to] the ones that are extinct – where might we find those? [It tells us] where we might best marshal our resources to possibly find life on other planets.”

Mars, because of its proximity to Earth and the belief that it once had large oceans and a protective atmosphere, is our best (and closest) candidate for ancient extraterrestrial life at the moment and extremophiles may help us to find evidence of that.

“We’re not yet looking for that direct evidence of microbes – we’re looking for those signatures, habitats and environments … You get strange chemistries in very, very dry environments,” Warren-Rhodes says. “Probably in the next decade or two, we’re going to be looking to directly test for [microbes].”

But first we need to understand the limits of life so that rovers will one day know what to look for.

“We study extremophiles in the context of astrobiology and life on other planets, because they give us the best ideas of the limits of life – the upper and lower limits in terms of temperature, acidity, alkalinity, pressure, salt and all the other things,” Cowan says at the Gobabeb facility.

Its large white water tower stands starkly against the red sand of the dune seas behind it. It has the look of an outpost on a different planet, and would be perfectly at home on the set of Star Wars.

Regarding hypoliths, Cowan says that life on other planets is unlikely to be under “a quartz rock lying in the desert, but it might be a variant of that – an ice sheet that allowed the penetration of a certain amount of light, for example”.

Asked about the adaptation of life to extreme environments, Cowan says: “Extremophile is a human-made term. I don’t think that they think of themselves as extremophiles.” He chuckles: “Not that they think.”

He cites organisms living in the coastal ice-free deserts of Antarctica (where there are also hypoliths) or the boiling hot pools in northern Chile. “They live there ’cause they think it’s normal … They are perfectly adapted to live in that environment.

First lake of liquid water is discovered on Mars