The state is perpetuating Afrophobia 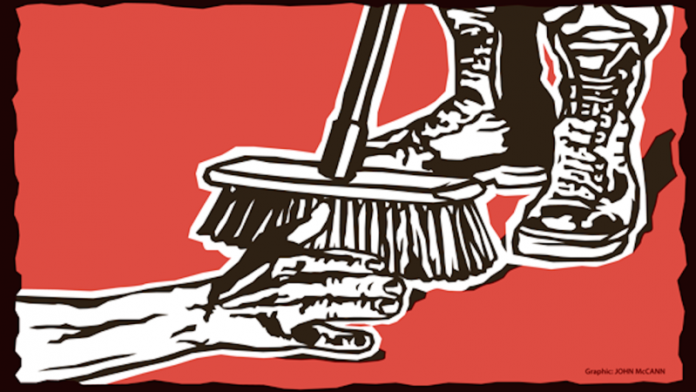 When the government called in the army to quell the spirit of Afrophobic violence sweeping South Africa recently, I grudgingly supported the move. Afrophobia is what we wrongly call xenophobia. If we really hated and feared foreigners, then we wouldn’t be targeting blacks only, so for precision it should be called negrophobia-Afrophobia.

The black-on-black violence we have seen is merely the spiralling out of control of the permanent structural violence in the black community. The last time the police reported on the statistics it was clear that within a period of 12 months we murdered about 17 000, mostly black, young men. The black African who arrives here from outside South Africa is placed in this generalised violent reality.

As Steve Biko so correctly said, it’s a miracle for a black person to reach adulthood in South Africa – not to mention the real possibility of dying before one reached the age of five, given the genocidal levels of infant mortality rates among black people.

I supported the army call because brute force needed to be met with brute force to break the violent cycle before it consumed us all.

Now, with hindsight, I wonder if one can under any circumstances support the increased policing of black bodies by a police force and an army that is governed by antiblack racist beliefs and practices. The police and army in a racist society invariably dish out violence against blacks.

The deployment of the army was meant to increase visibility at street level and to break up the formation of violent mobs. Instead of this reasonable intervention, we saw an apartheid-like systematic brutalisation of people in the middle of the night in hostels. This was not dealing with Afrophobia; it was a criminalisation of a whole people by virtue of where they lived. Invariably, they were black and poor.

The targeting of hostels performs the function of deflecting attention away from the roots of the violence. It creates the impression of exceptionalism, of the hostels as sources of the violence, when the truth is that the agents of Afrophobia are every-where because the sources are so generalised.

The triumphalism of Operation Fiela revealed more than it concealed. Despite official police denials, the campaign was a perpetuation of Afrophobia by other means. Basically, the South African government brought in the army and the police to complete what the citizens were doing.

It must be remembered that the anti-African sentiment we see manifested as Afrophobia is essentially organised by the state in the first instance. It’s the government that treats black Africans as illegal. Operation Fiela finally gives official expression to the mooted idea that the black African is a subhuman – dirt to be despised and swept away.

Fiela literally means sweeping the dirt away. One fielas with a broom. Removal of vermin is a more apt description of the concept. This discourse, therefore, affirms the self-hatred among blacks as state-sanctioned. If the state does it, surely it must be correct to emulate it as citizens?

We end up with a situation in which black youths from the townships believe they can do as they wish with amakwerekwere (foreign Africans) – they are, after all, “surplus people”, or beings without legal protection, available to abuse by all.

It has been proven again and again that when blacks institute violence against each other the perpetrators mimic the methods of white society: they assume whiteness when, for example, they castrate, lynch or burn each other. The master is present even in his absence.

Colonial borders were primarily created to demarcate the property of Europeans, as they sliced and diced Africa and parcelled it out to each other in 1885 in Berlin.

This state’s antiblack discourse and practice is sustained and taken advantage of by businesses in South Africa. They employ “foreigners” and pay them less than they would pay South Africans – and then use the racist stereotype that “foreigners” are not lazy like black South Africans. The tragedy is that the “foreigners” internalise the same racist discourse.

Exploited, overworked, underpaid, the black African is seen as the subhuman who takes jobs. The labour law regime allows for this reality because the employer is protected by the “flexibility” of the labour market. So employers hire at below survival rates because they are dealing with people without rights.

The answer to this aspect of Afrophobia is to have minimum wages across all sectors and to insist whoever is employed has similar rights. It must be legally permissible to be employed without so-called papers but, once employed, you must enjoy all the rights defined for that sector. This would end the artificial divisions between South African and African, so separated by the artificial colonial border now given life at the job-market level.

Operation Fiela has such wide objectives one can’t help but conclude that it is actually a ruse to criminalise Africans who come from outside the country as part of driving them back “home” by any means necessary. The operation claims to be multifocal, ranging from ridding the country of illegal weapons to dealing with drugs, prostitution, human trafficking, hijacked buildings and general lawlessness – and somewhere nicely packed in this long catalogue of sins is “undocumented immigrants”.

Let’s see how the operation has performed to date. On May 3 the police issued a triumphalist statement: “The National Joint Operational and Intelligence Structure is happy with the successes of this past week’s Operation Fiela, which rooted out criminal elements in seven provinces, resulting in 889 arrests.”

Before you pop the champagne cork, look closer at the figures and see what is actually being swept clean. Of the 889 arrests a whopping 745 are “undocumented immigrants”. So the police have arrested only 144 for other crimes in the whole of seven provinces? More than 80% of the “criminal elements” are Africans ostensibly without papers. Here, blacks have been criminalised by virtue of their blackness, not because they have done anything wrong. This “success” also exposes the true motive of Operation Fiela.

If we look at this figure, the reports of harassment and the fact that so many people have been arrested that the Lindela repatriation camp can’t cope with the influx, then we understand that Operation Fiela is about sweeping South Africa clean of black Africans from outside our borders.

Some migrants have been waiting for their documents for up to 15 years, so it’s not their fault they are not “documented”.

The more penetrating question, though, is this: Why do Africans need to have documents to be anywhere? If there is a need to have any document then it must be a single document for all of us in the continent.

The tragedy is the ruling party is pandering to backward sentiment, which it has helped create, and then it turns around and feigns surprise when society follows its example.

The poor in South Africa are under sustained attack from poverty and hunger and, instead of addressing these issues, easy scapegoats are thrown about.

The government now, like all right-wing parties and governments in Europe, wants to come across as tough against the “undocumented” to placate the poor, instead of dealing with root causes that are about lack of transformation and the continuation of apartheid economic and property relations in South Africa.

This situation is exacerbated by the terrible ongoing economic and political crises here and in neighbouring countries. A solution to these crises needs an Africa-wide approach, but it can only take place within a decolonising politics and movement. Until then we are going to be trapped in these cycles of violence.

Andile Mngxitama is challenging his expulsion from the Economic Freedom Fighters