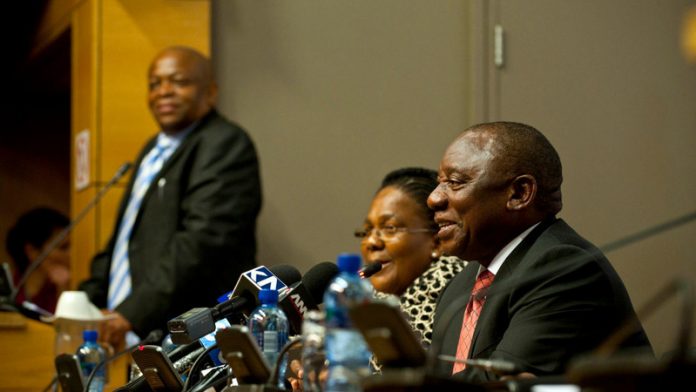 Gauteng’s e-tolling system is not going anywhere. In fact, motorists will need to settle outstanding e-toll fees before their vehicle licence disks can be issued when up for renewal.

Announcing the new e-tolls dispensation, including price reductions of up to 50% and compliance measures, Deputy President Cyril Ramaphosa said the new dispensation was about addressing the concerns raised by people in the province of Gauteng and beyond.

It includes reduced tariffs for all motorists, a halving of the monthly cap, a 60% discount on outstanding fees paid within a set time frame and a monthly cap on the penalty for accounts in arrears.

“Alongside a substantial decrease in the cost to users, the new dispensation will integrate existing information systems to improve ease of use, accuracy of information and co-ordination between different agencies. This will make it easier for vehicle owners to pay their toll fees at different points. These will include Sanral [South African National Roads Agency] kiosks, post offices, provincial licensing offices, retailers, vehicle dealerships and online.”

Ramaphosa said outstanding e-toll fees would be discounted by 60% and users would have six months during which to settle their debts, dating back to December 2013 at the discounted rate.

He said the new e-tolls dispensation was about doing the right thing for the people and had nothing to do with the upcoming local government elections.

“It is the right thing to address the needs and the concerns of our people, for us that’s the primary issue. We are not focusing on elections, we are focusing on governance and delivering a better life for our people. That is our main preoccupation.

“The elections are only next year, it is only then that the ruling party and other parties will focus on elections. What we are doing is to govern and make sure that we achieve the objective of the ruling party of delivering a better life for our people and moving our country forward for all and sundry,” said Ramaphosa.

Asked where the money would come from to address the shortfall, Nene said they would be submitting an Appropriations Bill to Parliament, “which we did indicate when we tabled our budget, because the matter was already before this committee of ministers led by the deputy president, that we be accommodating that in our budget. So we will bring that to Parliament and that will then determine that the money comes out of the national budget and the provincial government will do the same.”

Peters said the new dispensation would not be a template for any other e-toll projects that might come up as all projects were different.

Ramaphosa said the new dispensation demonstrated that they were a responsive and responsible government. “It addresses the concerns of Gauteng motorists, particularly those from low- and middle-income households, while ensuring that our approach to the construction and maintenance of a road infrastructure is sustainable. We have reaffirmed the user-pay principle as a fair, affordable and reliable mechanism to fund infrastructure development.

“The new payment options safeguard the integrity of the fiscus and enhance the ability of the South African National Roads Agency to raise funds to meet its obligations. It will ensure that Gauteng has an excellent freeway network well into the future, while reducing traffic congestion, emissions, travel time and transport costs.”

DA leader Mmusi Maimane said between the e-tolls and load shedding, the ANC had created a potent job-killing recipe for Gauteng.

“South Africans must continue to stand up against this unjust system. The DA has shown where we govern how e-tolls can be defeated.”