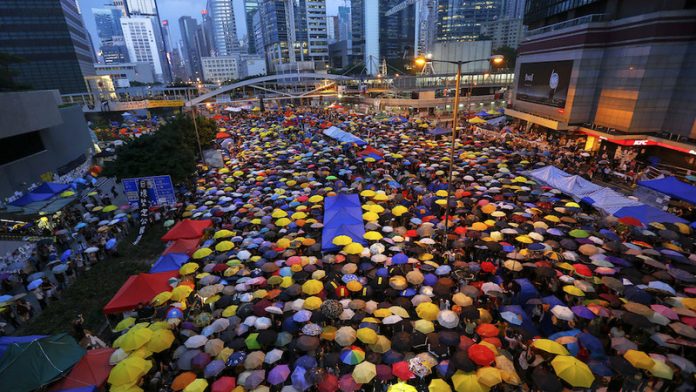 The shop assistant is abrupt when the question comes: “We are not going to sell that one. Sorry,” he says, when asked for a copy of one of Hong Kong’s most eagerly searched-for books.

And how about Zhao Ziyang’s bestselling Prisoner of the State – an explosive account of what happened behind the scenes during the pro-democracy protest of 1989 in Beijing? “It might come back,” he says vaguely.

On the surface, there seems to be no censorship in Hong Kong. Unlike the mainland, the web is free, a wide range of newspapers is available, television news covers demonstrations and protests, and nobody needs to apply for permission to print books.

“In 40 years, I know of only one book that has ever been stopped from distribution,” says Wong Sheung Wai, director of Greenfield Bookstore, a shop and distribution company, “and that was the Chinese translation of a guide to suicide.

“Taiwan translated it, but the Hong Kong authorities did not allow for it to be published and distributed here,” he says.

But mounting pressure from China to have greater control over what the Hong Kong public, and the Chinese tourists flocking there, read is creeping into this former British colony.

Through a complex web of self-censorship, soft censorship and mainland economic control, bookshops and media outlets in the territory have been changing their tone or giving less coverage to topics that China deems sensitive.

Umbrella movement
A slow but steady “mainlandisation” of Hong Kong, a key factor in bringing tens of thousands of protesters to the streets during last year’s umbrella movement, has been changing the face of the publishing and book distribution industry, with fewer shops willing, or able, to sell books forbidden in China.

Booming real estate costs add to that problem. “Readers’ numbers are going down everywhere, and nobody can afford a ground-floor bookshop unless they are backed by people with very deep pockets,” says one publishing industry insider.

The three main local bookshop chains, with a total of 51 outlets, are controlled by the liaison office, Beijing’s official representation in Hong Kong, which, she adds, makes sure they only pay a nominal rent for their operations.

That the liaison office is controlling most media in Hong Kong has been raising concerns. Recently, an article in the Chinese language Apple Daily (the only newspaper in Hong Kong completely independent of mainland influences) detailed how, at times through shell companies, the office controls 100% of Joint Publishing, Commercial Publishing and Chung Hwa Books, the three main bookshop chains, fully owned subsidiaries of Sino-United Publishing.

“If you ask me what is the biggest problem that Hong Kong faces right now,” says Alex Chow, one of the student leaders at last year’s protests, “it is the liaison office, and [its] growing involvement in Hong Kong’s affairs.”

Commercial interests
Renee Chiang, of New Century Press, an independent publisher that prints many politically sensitive books, says: “Even the three big chains are commercial interests, so they do try to sell what clients want. At times certain books disliked by the Chinese authorities will still be available, but hidden behind a counter, or piled up with the spines turned to the walls.

“In the past two years, though, things have been tightened up further. There used to be a table in the Chinese-backed bookshops which we called the ‘jinshu books table’, where forbidden books could be bought. It has disappeared from every shop. The only place that still has it is the airport, but they hide it at the back.”

One of Joint Publishing’s largest branches, in Queen’s Road Central, proves the point. A three-floor outlet, until a few months ago it used to have a big jinshu table crammed with titles banned in the mainland: mostly unofficial biographies of the main Chinese political leaders, past and present, and volumes that promise to reveal all the murkiest secrets behind high-profile trials – especially those that involve political, economic or sexual scandals.

Zhao’s Prisoner of the State, published by New Century Press, which detailed how the decision to open fire on unarmed protesters in 1989 was taken, is not available in Hong Kong despite previously selling 150 000 copies in a market where 2 000 is deemed a good return.

Another book by the same publishing house, To Be a Citizen: My Free China, by the lawyer and pro-democracy activist Xu Zhiyong (who is serving a four-year prison sentence for “gathering a crowd to disturb public order”), is not on the shelves, and any order for it receives a shake of the head.

The censorship is subtle enough, though. On the ground floor, where books on Hong Kong are located, there are plenty of titles on the umbrella movement; people browse through them openly. However, those most prominently displayed are critical of the Occupy movement.

“Things have been changing dramatically in the last two years. Since Xi Jinping came to power, what was tolerated before is not tolerated any longer, in China or Hong Kong,” says Wong of Greenfield Bookstore. “Joint Publishing used to order many jinshu books from us; now, they may ask for a few copies of some.

“We rely on ‘second-floor bookstores’, in higher floors of commercial buildings, with lower rents, but fewer people know them.

“The pressure is on to stop Hong Kong people and mainlanders from reading unapproved books. When sales became harder, we started shipping books to individual customers in China. Nothing reached them. We tried through a courier in Shenzhen, but they stopped accepting books,” he adds.

An explicit campaign against “politically harmful publications in Hong Kong”, launched in China in 2012, has seen pressure put even on travel agents, who are threatened with unspecified fines if the tourists that come to Hong Kong through them return with “forbidden books” – the list of which has never been made public.

According to Michael Davis of the University of Hong Kong, the political pressure is quite comprehensive: “At the university, in schools, and in the press, often you do not know who you are dealing with. Are Chinese state-owned enterprises part of the government? Are they pure business interests? This may never be tested, even in Hong Kong.

“The real problem, though, is … our local government does not defend our autonomy. Rather, it lectures Hong Kong on how to behave to please the central authorities.” – © Guardian News & Media 2015

The pandemic hit abalone farmers fast and hard. Prices have dropped and backers appear to be losing their appetite for investing in the delicacy
Read more
Business

Muddying the waters in the Musina Makhado economic zone

Citizens have for a year protested against the president seeking a third term in office despite a two-term limit. Many have been killed — and 90 more people died in this week’s crackdown
Read more
Advertising