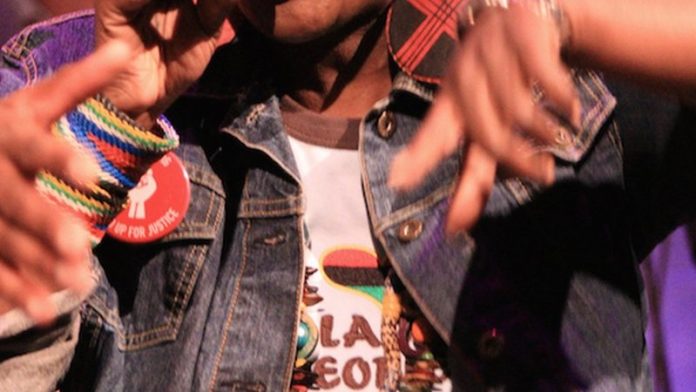 In the off Broadway musical Fela!, an interpretation of the life and music of Afrobeat originator Fela Anikulapo Kuti, Ghanaian American artist Abena Koomson plays the role of the firebrand’s mother, Funmilayo Ransome Kuti.

It’s a role which has profoundly influenced her career – and one that at some point forced her to take a three-year hiatus from her other love, teaching.

Koomson, a singer, poet and dancer, is also the dean of students at Harlem Village Academies in New York City.

On the phone from Harlem, Koomson is philosophical about the role of art as an educational tool. “One of the lessons art can teach you is that life is polyrhythmic,” she says. “Success doesn’t have to look similar because we’re all different. Art is developed through discipline, someone whose been to Broadway can tell you about that.”

Although Koomson pretty much created the role for the off-Broadway version of the show, it was one that she had to relinquish when the musical hit Broadway. “When this project was getting off the ground, I didn’t know people who knew Fela’s mom that well but I came to understand so much more about her from doing research and trying to embody her,” she says of how she related to Funmilayo.

“She was also an educator at the Abeokuta Grammar School, [and] she was the first Nigerian woman to drive a car. She was just a larger than life personality.”

When the show went on Broadway, Koomson learned that she was going to play Lillias White’s understudy, she says, adding that she was elated instead of disappointed. “For me it was about recognising a blessing. The first Broadway show I saw was Once on This Island [in which she played] mother of the gods.”

Koomson’s Broadway roles included helping the cast with vocal chord exercises, running rehearsals, and stepping in when people like White or Patti LaBelle (the other stand in) had other commitments.

She still played the Broadway role around 50 times. “I’m someone who came in through the backdoor,” she laughs. “I’m a dean in a high school.”

Koomson: Fela’s music unites people
Raised as an American by Ghanaian parents, Koomson moved to Harlem from Brooklyn two years ago and says that although there are similar patterns of gentrification happening in parts of both communities, Harlem still represents a “stronghold of people from the diaspora keeping the dialogue with African-Americans going”.

From her involvement in the musical, Koomson says she learned how Fela’s music has a way of pulling people together. “The Antibalas [the musical’s in-house band] are a band made up of many races playing Fela’s music … It’s connected me to a diaspora of people who have the desire to see justice done, to use music as a weapon – people who understand that to know what’s happening in Africa is important to all of us.”

One of the highlights was travelling with the show to Nigeria, where they performed at the New Afrika Shrine, now run by one of Fela’s children. “In Nigeria we were really being educated about who Fela was. You will have your critics, but generally we were received with open arms. It’s that idea of sankofa, of going back to your history to get what you need in the present.”

With her current visit to South Africa, Koomson says she is looking forward to her collaboration with South African-based saxophonist Femi Koya. “We share a love for jazz and Afrobeat, so we’ll be doing interpretations of Fela’s music.

“Anyone who comes to Fela’s music comes to it from their own vantage point, but people’s individuality always shows up. I’m always in search of these unique experiences. Plus, I’m gonna play some of my own music, which tends to blend Afrobeat, funk, jazz and poetry.”

Of the struggles of being an independent artist, Koomson says she’s survived by having “been able to build a performance family”.

To commemorate Africa Month this May, Joburg Theatre will be presenting a weekend of Africa Day celebrations featuring local and international artists on The Mandela stage. Abena Koomson, Lura and Femi Koya will perform on May 22 and 23, with the performances on May 23 also including South Africa’s Lira.