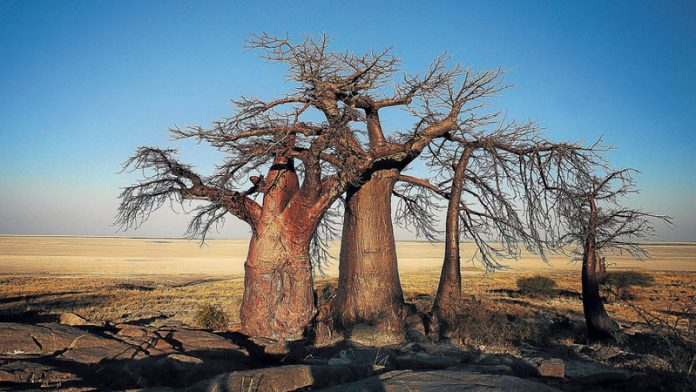 Engorged ancient baobab trunks could tell the story of climate change in South Africa over the past thousand years, according to a paper published in the journal PlosONE.

Adansonia digitata, a baobab endemic to Southern Africa, can provide this kind of information because of their hardiness and longevity, says Grant Hall, a co-author of the paper who is with the University of Pretoria’s stable isotope laboratory.

“In terms of trees … this is the longest record available. There have been a number of other studies done on tree species but those only go back 300 years or so,” he says.

In the article, “A 1 000-year carbon isotope rainfall proxy record from South African baobab trees”, researchers analysed four baobabs from northeastern South Africa to divine from their trunks what the rainfall was like during the trees’ lives. The timeframe and location include the Kingdom of Mapungubwe, dated to between 1075CE and 1220CE, in the Limpopo-Shashe Basin.

“The wettest period was AD1075 or [1075CE] in the Medieval Warm Period, and the driest periods were AD1635, AD1695 and AD1805 during the Little Ice Age,” write the authors, who are from Swansea University in Britain, Babes-Bolyai University in Romania, iThemba Laboratory for Accelerator Based Science, the University of Pretoria and the University of Cape Town (UCT) .

Carbon dating involves measuring the ratios of different types of carbon in a sample that could be a tree or an archaeological artefact. Carbon-14, which is found in the natural abundance of carbon on Earth, is radioactive and decays over time. By measuring the extent of carbon-14 that is still in an artefact in relation to the quantity of other forms of carbon present, scientists can work out how old the artefact is.

“When there is a lot of moisture available to the tree, its leaves are continually taking in carbon from the atmosphere [for photosynthesis],” Hall says. When it is dry, the leaves’ stomata (pores for absorbing water) close so that they do not lose water, reducing the uptake of carbon from the air.

Baobabs produce growth rings or tree rings, and each ring in a trunk represents a year of the tree’s growth. The researchers were able to determine the carbon ratios within the different rings.

“This stuff can be used by archaeologists as an extra line of evidence,” Hall says, citing the chronology of the Limpopo Valley Iron Age where Mapungubwe was.

Paleo-environment activity
Simon Hall, a senior lecturer in the department of archaeology at UCT, says that Bantu-speaking farmers – who farmed cereals, cattle, or both – were first detected in that area in 900CE, and “it is important to know what the paleo-environment was doing. The baseline for any farmer is rainfall and temperature and those kinds of issues.”

But the archaeologist cautions against drawing a parallel between people’s movements and climate. “In the 11th century, the scale of the political and economic system in the Limpopo-Shashe Basin [was] increasing quite rapidly. That is underpinned by a sustainable agricultural system … [but] it would also be premised on the increasing trade links [between communities in the area and those in Southern Africa and overseas] …

“When it comes to climate change, or environmental change, how it is politically managed can give us outcomes or directions that people cannot anticipate. They are important variables, but not the only ones.”