Zolani Mahola on how to stay grounded and fresh 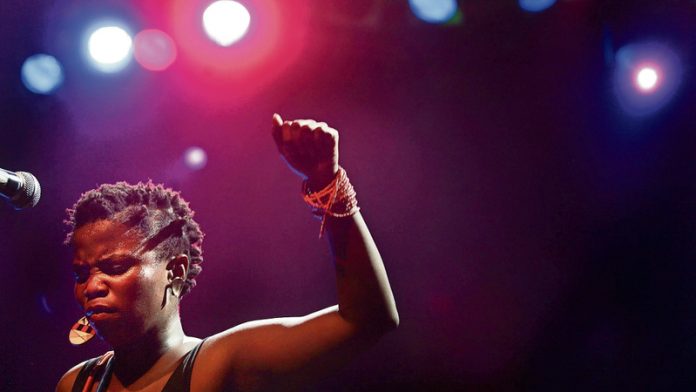 South African audiences will be seeing more and more of singer and actress Zolani Mahola in 2015. Mahola, who’s the lead singer of the local Afro-fusion band, Freshlyground, is a judge on the new singing show, The Sing-Off SA and her band is due to release new material in June.

Freshlyground will also perform at the 2015 MTN Bushfire music and art festival in Swaziland in June. The festival features artists such as Sweet Honey in the Rock, Les Nubians, The Parlotones, Poni Hoax, ­Cassper Nyovest and Culoe de Song.

South African television audiences were first introduced to Mahola on the SABC1 drama series Tsha Tsha in 2003, in which she played the role of Boniswa. In 2003 she stole the hearts of audiences with Freshlyground’s debut album Jika Jika and their follow-up album Nomvula (2004), which had hits such as Doo Be Doo, Nomvula, After the Rain and the ballad I’d Like.

Since then, the seven-piece band has gone on to capture the attention of international audiences, wining awards such as a South African Music Award for album of the year and the MTV Europe Music Award for best African act.

The band surprised some of their fans with the single Take Me to the Dance, from the 2012 album of the same name. It had a heavy electro sound influence, a shift from their previous Afro-fusion sound. The Mail & Guardian caught up with Mahola ahead of the band’s performance at Bushfire to talk about the band’s new music, going solo and being a part of The Sing-Off SA.

How has your experience on the Sing-Off been so far?
I feel great about the Sing-Off. I’m very excited about it. It’s the first time ever that a singing competition for a cappella groups has been on SA television. It’s very timeous mostly because of the success of bands like the Soil, who are making a cappella music popular at the moment. It’s good for people to see more examples of that happening in South Africa. As a judge I don’t feel pressure as such.

Do you have plans of returning to our screens as an actress?
I would love to. I’m waiting for somebody to give me a juicy script so I can fall into it.

How has Freshlyground’s sound changed over the years?
We are always at an experimental phase. The sound has changed and keeps changing but from the very beginning, our brief to ourselves was a non-brief. We have always allowed ourselves to write all kinds of music and when you listen to our most popular album, Nomvula, there wasn’t one sound on that album, there were different genres of music and that hasn’t changed. Maybe we are ­experimenting a little bit more on the electronic scene and we are doing that also with our latest single which we are releasing in June, although the electronica is a little bit softer on it.

What is the title of the new single?
It’s called Don’t Leave Me and we’re going into a very exclusive deal with Highveld radio and we are very excited about that.

Is the band currently working on an album?
We don’t know if we are going to do an album per se. We are going to release a single for now and we are working on an upcoming single with a guest artist. I’m not going to mention their name [laughs]. We’ll see how Don’t Leave Me does and then probably later in the year we will release our second single. What we might do is release singles and then collate them into an album. The music industry is experiencing an influx at the moment and the old ways of doing things are really falling away. So we just gotta see how it’s working for us.

Why did the band delve into electronic music?
I guess maybe one of the reasons was that we hadn’t experimented with it before. For us it was a new thing and that’s what made it exciting and attractive.

What was the feedback from the fans?
There was mixed feedback. I think some people didn’t identify with the sound. Some of our fans felt it didn’t feel like us but there were a whole lot more new fans – maybe younger fans who really appreciate the sound.

What do you think is most important: to give the fans what they want or to stick with the artist’s creative vision?
For me it has to start from an authentic place. It has to be a sound that we love. All things we put out are the things we felt are awesome and those are things that have really worked for audience members and people have really appreciated. I think as an artist that is always the standpoint you should start from.

Any plans for releasing a project as a solo artist?
[Laughs] I am not at liberty to say.

What is the atmosphere like at Bushfire?
Oh my word, it’s electric. Swaziland is so full of heart. There is so much energy there and the people there know how to party.

You’ve recently become very active on social media. What prompted this change?
I just want people to see what I am all about. This is one of the ways in which the music industry is changing and social media presence is so important for artists now. You almost can’t have a social media profile, whereas for the first six years of my career I didn’t need to be.