No 1’s strategy: Shock them till they’re numb 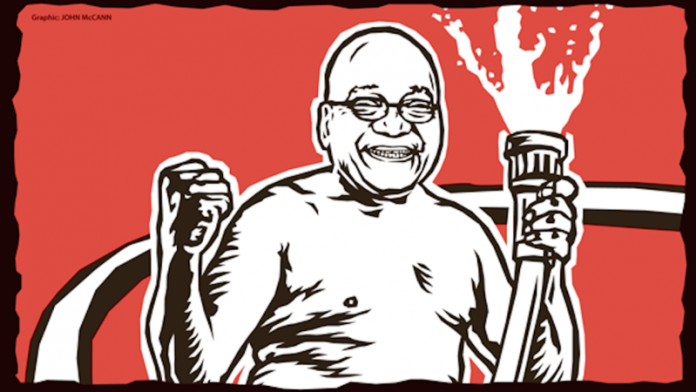 In Chimamanda Ngozi Adichie’s novel Americanah a key character, the Romeo in the story, is a cultured young man with a middle-class upbringing by the name of Obinze. He ends up as an expatriate toilet cleaner in London. One day at work, Obinze gets the shock of his life “to discover a mound of shit on the toilet lid, solid, tapering, centred, as though it had been carefully arranged and the exact spot had been measured”.

Stunned, Obinze stands before the perfectly misplaced contents of human bowels, wondering what kind of an English person would do such an unEnglish thing. In his outrage, Obinze takes off his toilet-cleaning gloves and quits.

We react differently to shocking acts, scandalous utterances, outrageous performances and chilling discoveries. South Africa has become a country with an uncanny penchant for the outrageous – a country alive with the possibility of excess and shock. It would be neither correct nor fair to attribute this national talent solely to President Jacob Zuma, but it must be said that he is a great asset in this regard.

The Zuma political strategy of choice is one of excess, outrageousness and shock. As Steve Biko once observed, the main strategy of the apartheid police towards blacks seemed to be “harass them, harass them”; the Zuma strategy appears to be “shock them till they’re numb”.

Some of the most outrageous things that have occurred in the land have a direct causal link to him and his person. Other shockers simply derive inspiration from him before forking off towards their own destructive destinations. Few leaders, political or corporate, have had half as many shocking things done or said by them, of them, for them or on their behalf. I will return to this theme later.

First, we must hasten to say that Zuma is not unique, either here in South Africa or elsewhere. That is not to suggest, as some lazy thinkers sometimes do – often with naked racist intent – that Zuma is bad because he is black and, “like the rest of them”, he can’t govern. I suggest that we render unto Zuma what is due to Zuma.

Yet even Zuma has stiff competition at home and abroad. He has, for example, nothing on Allister Sparks’s “smart” South African politician, Hendrik Verwoerd. Nor does he come close to John Vorster and PW Botha and their sheer ability to sow fear and mayhem. Internationally, Zuma also had considerable competition in the form of Sepp Blatter, who has gallantly, if also shamelessly, led Fifa from ignominy to ignominy for decades and will take until at least December to leave the stage.

Nor are those to whom Zuma has generously given this occasion to criticise the ANC correct to reduce that gallant movement of the people to Zuma or any single individual, Nelson Mandela included. That is, of course, not to gainsay that the movement is indeed in grave danger of losing its way and its place.

All this is meant to say that the Zuma flair for the outrageous and the excessive must be appreciated in context. Part of that context is a country that has not disappointed when it comes to its own share of excess and outrageousness, reaching a crescendo in the lead-up to and during the Zuma presidency. Who can forget that day in April 2008 when Mokotedi Mpshe, then the acting national director of public prosecutions, announced the dropping of all charges against Zuma – and unleashed the Zunami upon us?

In August 2012, from the comfort of our homes, we watched the first post-apartheid massacre, in Marikana, unfold before our eyes.

The nation was shocked when its born-frees found a cause, and succeeded in getting the University of Cape Town’s statue of Cecil John Rhodes removed. Even more shocking to the nation was the realisation that (the) Rhodes (statue) had been sitting in that prime position, pretending to be thinking, with a smirk on his face, for the past 21 years.

Zuma’s outrageous list of faux pas, in word and in deed, are legendary. In a seemingly rushed and poorly contextualised book, Clever Blacks, Jesus and Nkandla: the Real Jacob Zuma in His Own Words, Gareth van Onselen tried to compile a compendium of the choicest Zuma bloopers. But Zuma is so prolific in the production of slip-ups and gaffes that even this book, published in 2014, is already outdated.

Similarly, Max du Preez and Mandy Rossouw’s The World According to Julius Malema has been overtaken by time and Malema’s ability to manufacture one-liners and hyperbole. Both books make great South African toilet-reading material.

The highest or lowest point – depending on one’s vantage point – in the evolution and execution of the Zuma strategy came on May 28, when Minister of Police Nathi Nhleko released his Nkandla report on the so-called security upgrade, at a cost of R246-million to the South African taxpayer, of Zuma’s private homestead. Surely, this will go down as the most outrageous report delivered by government since the end of the apartheid era. With Public Works Minister Thulas Nxesi by his side, making lively, agreeable faces while moving his reading glasses comically on and off, Nhleko stoically read his report like a loyal and disciplined cadre of Jacob Zuma.

The report was designed to finalise a long-established security cluster and ANC strategy to relativise and ultimately discredit the report of the public protector on Nkandla, particularly its recommendation that Zuma should pay back a portion of the money used for the nonsecurity aspects of the upgrades to his private homestead.

To back up his findings, Nhleko showed a hilarious amateur video about how Zuma’s “fire pool” works. He also had a video-recorded interview with a cultural expert who “unpacked” the complex notion of a modern Zulu homestead. He quoted the “authoritative” Wikipedia to shed light on the imperial Roman origins of the Nkandla amphitheatre.

Unsurprisingly, Nhleko found that the Nkandla swimming pool, chicken run, cattle culvert, the amphitheatre and the double-storey house called a visitors’ centre are not what they seem to be. They are essential and strategic security features in the great national task of providing protection to Number One.

Not only did Nhleko come close to blaming the media and the public protector for “the magnitude and intensity of scrutiny that … Nkandla … has been subjected to”, he also added a bullish parting shot: “The outstanding security-related work at Nkandla should be funded and completed expeditiously,” he said. Thixo wase Nkandla! (God of Nkandla)

I take my hat off to those who have tried to verbalise and articulate their dissent, shock or outrage over Nhleko’s report. But I also notice how many of them seem to fail dismally at matching the Zuma/Nhleko levels of outrageousness without sounding worse than they do, or insane, or both.

The genius of the Zuma shock strategy is to get his detractors to foam at the mouth and choke in anger or disgust before they can finish a speech. It is precisely in the frequency of their reference to Nkandla (or any other Zuma scandal) that they begin to sound monotonous, hapless, inarticulate, ridiculous, uncreative, hateful and too obsessed (with Zuma). Take, for example, Adriaan Basson’s book titled Zuma Exposed. What can anyone do or say to expose Zuma that Zuma and his lieutenants have not done already?

Nkandla cannot be out-scandalled. No words of outrage will express the scandal in terms worse than those already captured by Nkandla itself. When his detractors are worked into a frenzy, as they stampede to insult Zuma, the Zuma strategy of shock and awe is working beautifully.

It is often at this stage of the combat that Zuma turns on the heat and deploys some sarcasm, deriding his opponents for having finally succeeded in learning the pronunciation of one African word. In Parliament he mimicked political novice Mmusi Maimane’s speech about a broken president. He laughed at the Economic Freedom Fighters’ filibustering tactics.

And, as the jaws of his detractors and supporters drop in synchronised shock, Zuma belts out his famous belly laugh.

Tinyiko Maluleke is a professor at the University of Pretoria. The views expressed here are his own