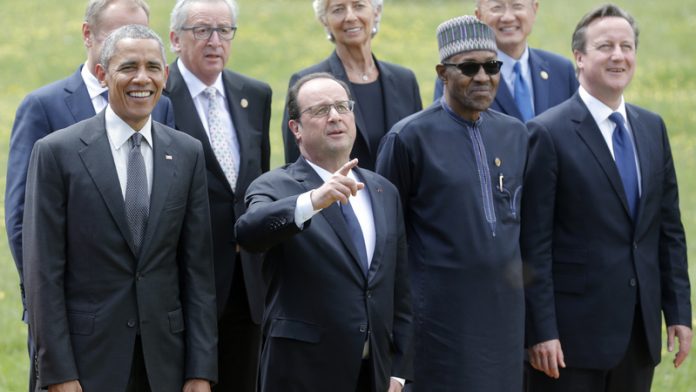 European leaders assured US President Barack Obama that they’re up to dealing with regional crises from the Russia-Ukraine standoff and jihadism in the Middle East to the upsurge in migration across the Mediterranean Sea.

Europe’s turbulent surroundings – along with home-grown dramas such as fiscally hobbled Greece’s potential ouster from the euro and Britain’s possible secession from the European Union – dominated a summit of Group of Seven leaders in Germany.

The absent Russian President Vladimir Putin, who was kicked out of the world’s most exclusive club last year after seizing Crimea and fomenting the pro-Kremlin rebellion in eastern Ukraine, ghosted his way through the meeting at Schloss Elmau, a castle south of Munich.

“We didn’t speak disproportionately about Russia,” the host, German Chancellor Angela Merkel, told reporters on Monday at the meeting’s close. “We spoke about Russia in one case, the Ukraine conflict, but we had much longer and more intensive discussions about other sources of conflict, such as the fight against terrorism.”

Europe’s crisis-fighters took a two-pronged approach to Putin, labelling him a foe over Ukraine and a potential friend on other issues, such as halting Iran’s quest for nuclear weapons, pacifying Syria and Libya, even in combating greenhouse-gas emissions.

Putin talks
“We need to talk with Russia on Iran’s nuclear program, on Syria,” French President Francois Hollande said. “I have talks with Merkel and Putin, very regularly, on Ukraine.”

Last year’s expulsion of Putin turned what had been the G8 since 1998 back into the G7: the US, Japan and Canada plus EU members Germany, France, Britain and Italy. There was little evidence that the Russian president will be reinstated in the near future.

“At the present point in time it’s hard to conceive that we can have significant and meaningful discussions including Russia in the G8,” said Japanese Prime Minister Shinzo Abe, the host of next year’s gathering. “Confrontation is no reason to stop dialogue. It is because there are challenges that we should engage in dialogue.”

Instead, the four European leaders committed to stiffening economic sanctions against Russia in case the tottering ceasefire in eastern Ukraine collapses completely. They also pledged to extend the current sanctions until at least the end of the year – a move requiring a unanimous vote in the 28-nation EU.

‘First goal’
Current EU restrictions bar financing for major Russian banks, ban the export of sophisticated energy-exploration equipment and prohibit the sale of weapons and some civilian goods with military uses. The need for unanimity has prevented the bloc from going further.

Obama said the “first goal” for a June 25-26 EU summit is to reaffirm the status quo on sanctions. “There is strong consensus that we need to keep pushing Russia,” he said, adding that “our hope is that we don’t have to take additional steps”.

Obama declined to take sides on the stalemate between Greece – not represented at the G7 – and the European creditors led by Merkel who were there. While Greece has been a daily preoccupation since an anti-austerity government came to power in January, it eluded mention in the G7 communique.

Obama’s post-summit briefing included nods to the creditors – Greece has to get “serious” about reforms, he said – and sympathy for the “extraordinary challenges” of the Greeks. He called on both sides to show “sufficient flexibility”.

British Budget
The leader of the most steadfast US ally in Europe, Prime Minister David Cameron of the UK, spent part of the summit fending off the notion that Britain is going soft on a commitment to keep the military budget at Nato’s target of 2% of gross domestic product.

Britain is one of four Nato countries to meet the target. The newly re-elected Cameron has ordered a review of Britain’s defense posture, prompting speculation that the military will be a casualty of his campaign promise to cut public spending.

“We are not shrinking: Britain is a serious global player in the world with the budget to back it up,” Cameron said.

"African corruption" is only African as regards its victims. Its perpetrators are institutions and individuals from across the globe who are willing to loot without conscience as they watch their offshore accounts grow.
Read more
Top Six

President Donald Trump's historic impeachment trial begins in earnest on Tuesday in the Senate, with Democrats calling for his removal from...
Read more
Analysis

Three children are dead. More than a dozen homes have been gutted by fires in the past six months. And, as...
Read more
Advertisting
Continue to the category
National