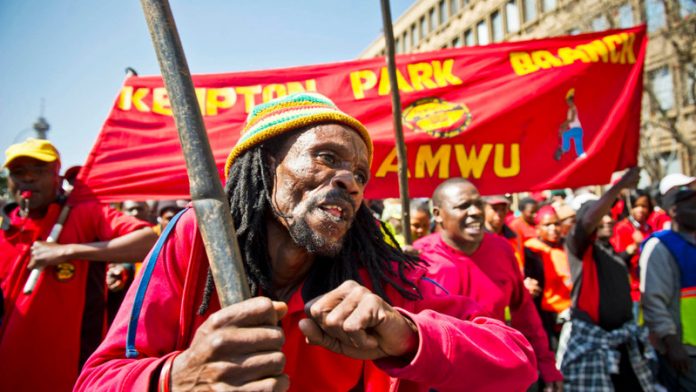 Public sector unions have pulled out of the hard-won 2015 wage agreement that was announced in May over a disputed clawback that the government has instituted.

Frikkie de Bruin, general secretary of the Public Service Co-ordinating Bargaining Council, said on Thursday that labour had withdrawn from the agreement. The adjustment, which has infuriated unions, will in effect reduce the recently settled wage increase for 2015 to 6.4%, instead of the original 7%. The bargaining council is in the process of obtaining a legal opinion on whether government is within its rights to claim back money it argues was overpaid under the previous wage agreement, which expired in March.

The dispute threatens to ruin a hard-won settlement, achieved in an environment where government is under pressure to rein in costs amid deteriorating labour relations that saw protracted strikes in the private sector last year.

Unions have demanded that, while legal opinion is sought, the state suspend the payment of the reduced amount and pay the full 7% increase.

Brent Simons, spokesperson for Public Service and Administration Minister Nathi Mthethwa, said on Thursday the government was unable to stop the implementation of the adjustment in this month’s salary run, owing to technical issues in its personnel and salary information system.

No salaries
The suspension would have resulted in all public servants not receiving their salaries at all, he said.

According to Simons, unions were not convinced by this and argued that the wage agreement – under the bargaining council’s resolution 2 of 2015 – had been breached.

“Labour further indicated that it withdraws from participating in all collective bargaining processes in the public service, and all sectoral bargaining councils,” he said.

The unions’ withdrawal suggested negotiations, which have taken eight months, may have to be reopened, with renewed threats of a strike.

But De Bruin believed the agreement would stand and the process would not have to start from scratch. He said labour’s exit raised legal questions over whether aggrieved parties could simply walk away from a binding agreement. Under the law, parties may only exit an agreement if it is for an indefinite period.

“We will still be awaiting the outcome of the legal opinion and we will … start a process of engaging parties to attempt to bring them back to the table,” he said.

Claw back money
The government remained adamant it had the right to claw back money from civil servants through the new agreement. Simons said talk of a strike was premature. “At no stage did the department [or] government negotiate in bad faith,” he said.

The state’s decision to effect the adjustment is a result of inflation projections coming in lower than forecast under the previous agreement, and its need to recover what it deems is an overpayment.

According to Simons, the 2012 Public Service Co-ordinating Bargaining Council resolution that governed the wage increase for the past three financial years allows the state to claim this money back.

Under clause 3.5 of the resolution, if the percentage for inflation is higher than the projected average, the difference will be added to the adjustment for the following year.

Simons said this means that the government would have added additional money to salary adjustments if the consumer price index was higher than the agreed percentage.

Clause 3.6
Similarly, clause 3.6 states: “If the actual percentage for the period is lower than the projected average, the difference shall be deducted from the adjustment for the following year.”

Simons said the state had wanted to implement clause 3.6 and have the overpayment of 0.6% subtracted from the cost-of-living adjustment with effect from April 1 this year.

“The onus of reading any signed document rests solely with the unions and their representatives,” he said. “To this end, we need to ask the question: If, as agreed, government has the responsibility to recover overpayments or rectify underpayments for the 2014-2015 financial year, when are we expected to make this adjustment, other than once we have concluded a new agreement?”

De Bruin said that, in the unions’ interpretation, the state is not in a position to claim back the money, given that the previous wage agreement lapsed on March 31.

The move had come as a surprise and has contributed to the current outcry, he said.

Legal process
Simons said the government would abide by the legal process’s outcomes and hoped unions would do the same.

But the unions are outraged.

“Labour is very angry with the manner in which the employer would want to parachute in something that has not been discussed through the negotiation,” Mugwena Maluleke, general secretary of the South African Democratic Teachers Union, said earlier this week.

He warned that negotiations might have to start from scratch, with the possibility of a strike.

The state had not raised the issue of a 0.6% clawback during the eight months of talks, he said, despite there being previous cases when unions had tabled adjustments in their favour. Maluleke didn’t answer calls seeking further comment on labour’s exit from the agreement.

The unions initially demanded 15%, but settled on an increase of 7% for 2015, and an inflation plus 1% increase for the following two financial years.

The deal, which also includes a 28.5% increase in medical aid contributions and a housing allowance of R1 200, will add R66-billion more to the government’s wage bill over the next three years, according to the public service department.

The treasury had originally planned for a 6.6% growth in government wages in this year’s budget. The additional money will come from “savings, reprioritisation and drawdowns on contingency reserves”, according to Phumza Macanda, the spokesperson for the treasury, who said “inflation has turned out to be below projections, thus labour benefited from a higher real increase”.

Michael Samuels, the head of management and human resources management at the school of economic and business sciences at Wits University, argued that the government had negotiated in bad faith.

Inviting trouble
It is inviting trouble with the unions at a time when the country can ill afford another strike, he said. The impasse also comes as local government workers declare a separate dispute with the South African Local Government Association, Samuels said, adding that a combined strike by public sector employees and municipal workers would be a complete disaster for the economy.

There is growing concern about the state’s wage bill and the increase in the size of the civil service.

Joint research by Fanie Joubert and Adele Breytenbach, both in the department of economics at the University of South Africa, and Jannie Roussouw, the head of Wits University’s school of economic and business sciences, has warned of a looming fiscal cliff, thanks in part to public sector wage growth.

The cliff is the point at which civil service remuneration plus social grant expenditure is equal to all government revenue.

But civil service growth has levelled off in recent months. According to Roussouw, between April 2014 and December 2014 there was almost no growth in civil service employment numbers. This has delayed the year of the looming fiscal cliff, initially estimated at 2028.

But Simons said the number of public servants amounts to only 2.5% of the total population of 52-million, and the public service is regulated by norms and standards that determine “post-provisioning ratios in most sectors according to the citizen segmentation of the population”.

Public servant growth numbers have been relatively slow according to the institutional norms that are based on affordability, he said.

The government is committed to start measuring productivity against labour, performance and operational factors in the public service to get value for money, Simons said.

It will also manage their compensable worth against the comparable worth of their contribution to economic growth, he said. “In the interim, it would be ideal to slow down any further spending on the wage bill until we see a more positive economic outlook,” Simons said.