Greek economy teeters on the edge 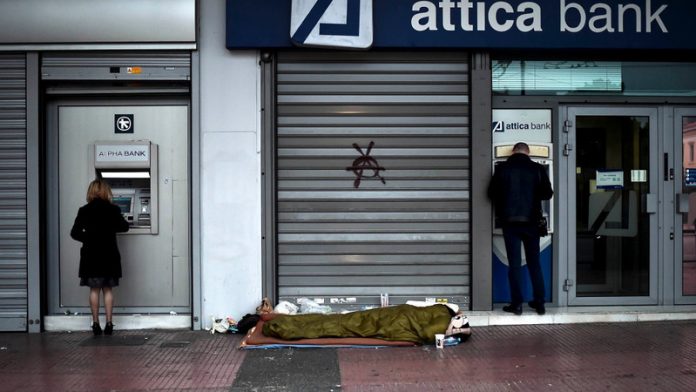 “Everybody’s doing it,” says Joanna Christofosaki, who is standing near a Eurobank cash dispenser in Kolonaki, Athens. “Our friends have all done it. Nobody wants their money to be worthless tomorrow. Nobody wants to be unable to get at it.”

A researcher at the Academy of Athens, Christofosaki says she knew people with “€10 000 somewhere at home” and others who kept their stash at work. Is she among them? “If I was, I certainly wouldn’t tell you.”

This week in central Athens it was not too hard to find people worried the latest breakdown of talks between Greece and its creditors over a new aid-for-reforms deal may have implications for the security – and accessibility – of their savings.

With time running out to secure a desperately needed €7.2-billion in new rescue funds before month-end, when Athens is due to repay €1.5-billion in loans to the International Monetary Fund, Greeks are withdrawing money from Greece’s banks at an unprecedented rate.

Bank deposits have been falling steadily since October and now stand at their lowest level since 2004. Withdrawals in recent weeks have averaged €200-million to €250-million a day, but on Monday – after the shock collapse of last-ditch talks between the Greek government and its eurozone and international lenders – withdrawals surged to €400-million.

Money transfers
“People are concerned,” says a company owner who asked not to be named. “I think those who could have transferred money abroad. Others have taken out enough to see them through any crisis. I have.”

Sofia, who runs a boutique in suburban Athens, says she and her husband have €15 000 in a safe, “to be sure we’re not caught out”.

Elsewhere, an anonymous car concessionaire confesses to “getting into gold a little bit. Not much. But it’s safe, isn’t it? That’s what they say.”

Nikos Grigoriou, a software consultant, says the possible introduction of capital controls – as happened two years ago in Cyprus – was the worry now. “If they fail to reach a deal and Greece defaults, there’ll be panic. Anything could happen.”

Cyprus limit
In Cyprus, that limit was set at €300 a day. Many observers believe Greece might well need to set a considerably lower daily limit.

“What’s that going to be like – no one allowed to take out more than, I don’t know, €100 a day?” asks Christos Ekonomou, a hairdresser.

As Greece’s choice comes more sharply into focus – between opting to stay in the eurozone and experiencing more austerity or defaulting on its repayments and possibly returning to the drachma – economists have suggested, as an interim measure, a halfway house parallel currency involving government IOU notes and tax credit certificates.

For every wealthy Kolonaki resident fretting about cash, there is a poorer employee convinced it would not come to that. Nancy Parlakidi, outside the Alpha Bank on Stadiou Street, says: “I’m worried sure, for my job, my kids, my future. But not about my money at the bank.”

Withdrawing €10 notes from the Piraeus Bank near Syntagma Square so he can go shopping, Georgios Votskaris, a junior office worker, suggests “older and richer people are withdrawing money because they’re frightened. I’m not frightened. I think there’s going to be a deal. But mainly I don’t really have money to take out. I’m 33. What kind of savings do you think I could have built up over the past five years?”

‘No money’
At the Eurobank on Voukourestiou Street, Dimitrios Barpakis (40), a software engineer, says much the same. “I have no money that I could actually get worried about. I’ve lost money during this crisis; I’ve had to spend my savings. And I think there’ll be a last-minute deal. It’s in no one’s interest for there not to be.”

Despite concerns about Greece’s economic future, few see benefits from leaving the eurozone. A recent poll for the news website Newsit shows 74% of Greeks back the euro – 50% would be prepared to accept “major concessions” by Greece’s Syriza-led government if it would break the deadlock with lenders.

Barpakis adds: “As long as the eurozone is prepared to be what it should be … a union whose members help, not punish, each other.”

Christofosaki is less sure: “The big problem in this country is a mental one. Even if we do get concessions and there is a deal, a majority of people don’t really want to reform. Greeks are a recalcitrant lot.” – © Guardian News and Media 2015