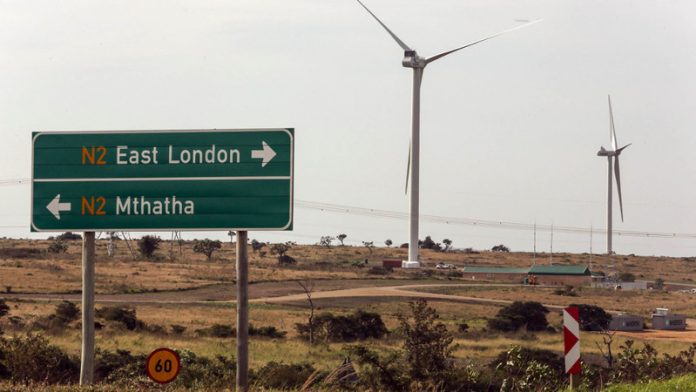 The Eastern Cape is an ideal location for generating wind-driven power, but the former homelands are missing out on the government’s renewable energy drive because of problems with securing lease agreements.

Since 2011, 92 solar and wind projects around the country, in four out of the five bidding rounds in the energy department’s renewable energy independent power producer procurement programme, have been allocated. This amounts to R193-billion of investment by the private sector.

A R19-billion contribution to socioeconomic development will be spent during the projects’ 20-year life cycles. This will be spent in a 50km radius of each wind turbine. Another R6-billion is set aside for enterprise development programmes.

Eskom signed power-purchase agreements with the successful bidders to buy their electricity at a set price for two decades to give the companies a guaranteed market.

But developers are avoiding communally owned land because of the onerous process involved in securing leasehold agreements on these tracts.

While the Eastern Cape has secured a substantial chunk of the nationwide wind power allocation so far, with about 16 wind farms, all except one belonging to Innowind are located outside the former homelands.

Privately owned land
Innowind’s 33MW Wesley project is located on privately owned land in the former Ciskei, a move the company’s chief executive, Martin Webb, lauds as a step in the right direction and a taste of things to come.

Former homeland areas represent 40% of the Eastern Cape’s land mass and 60% of its population.

“The Eastern Cape has got the wind, it’s got the solar power and you can produce the energy locally [in terms of where it will be used], says Sean Gibson of Altgen.

“It’s the right way to think about things in terms of devolving distribution from a centralised point, near coal mines and power stations, because there are transmission losses when transporting power.

“If are you dealing with a farmer, Eskom, who is going to buy the electricity, the lawyers who register the servitude or a lien over a title deed – you’ve got a relatively neat and certainly understandable deal. You do the same deal with a community, it’s a different scenario altogether.”

In his submission to the minister of economic development, Ebrahim Patel, and the chairperson of the portfolio committee on economic development, Elsie Mmathulare Coleman, United Democratic Movement chief whip Nqabayomzi Kwankwa wrote that the majority of wind farms in the Eastern Cape were situated in two areas, around Jeffrey’s Bay and Cookhouse, creating long-term developmental imbalances.

Primary concern
The department of energy appears to be agnostic about the project spread, with its primary concern being cheap electricity quickly.

“In terms of the wind, roads and access to the grid in the [former] Transkei and the Ciskei are optimal,” says Webb.

“There’s this misconception about its remoteness. Were it not for the underused grid, the wind and how we’ve been welcomed by the people, we wouldn’t have gone into the area.”

Webb says that as they tried to develop ­projects in the former homelands – two are ready for further bidding – they discovered that it could take between three to four years to secure a leasehold agreement and about R10-million to prepare the land for the bidding process.

“On the provincial level it goes through a series of machinations and eventually it works its way through to Pretoria. Because of the stages, the process is lengthy in and of itself, but it is compounded by delays in the department.”

Lease agreements
Johan van den Berg, of the South African Wind Energy Association, says it is highly unlikely that a would-be developer would want to purchase the land where they hope to establish a wind farm.

“A wind farm [typically] uses less than 5% of the area [of a prospective farm]. The rest of that land is available for the use of what it was used before.”

Van den Berg says securing lease agreements on communal land may be made more difficult by the fact that land parcels are not always clearly described and there may be variations between property deeds and actuality.

“Often, it’s not one piece of land but many little pieces of land involved.”

Explaining the process, Bahlekile Keikelane, acting director of property management and tenure reform systems at the provincial department of rural development and land reform, says that in the former homeland areas most land is unregistered state land.

“Some of those properties have what you call quitrent titles, which was more like a lease issued to black people then. You find that title is on the fourth generation so it’s a process to get that title upgraded into a full title.”

Surveyed and registered
The required piece of land needs to be surveyed and registered by the state before a business proposal is brought before the provincial vesting and disposal committee. The committee can then recommend that the minister give a long-term lease on the land, providing that the people occupying the land are aware of the development and of the revenue due to them.

“We as provincial departments can’t help these delays because we have to comply with a checklist,” says Keikelane.

A development agent, speaking anonymously, says that in the initial stages developers do not want 20-year leases.

“They just want to know that no one will develop on the land. Then they put up wind masts and measure data but it’s difficult for the department to understand these temporary arrangements. Plus they only want a portion and that can only be determined once the micro sighting has been done.

“For the developers it’s frustrating because you can’t bid until you have the lease secured.”

Constance Mogale, of the Centre for Law and Society, says the problem is there is no communal tenure law.

‘Security of tenure’
“People that do not have security of tenure can’t enter into a lease agreement or a bond. The Communal Land Rights Act was struck off the roll and tenure policy is under debate.

“The Interim Protection of Land Informal Rights Act is an interim legislation that has to be reviewed annually. It compels any developer to have the consent of those people occupying the land.

“The problem is that the government – through the Communal Land Tenure Bill – is trying to transfer land custodianship to traditional leaders so that people will have rights only to their residential area. Grazing rights and the rights to perform rituals will all fall away,” Mogale said.

“Companies looking to develop land will basically only have to consult traditional leaders.”