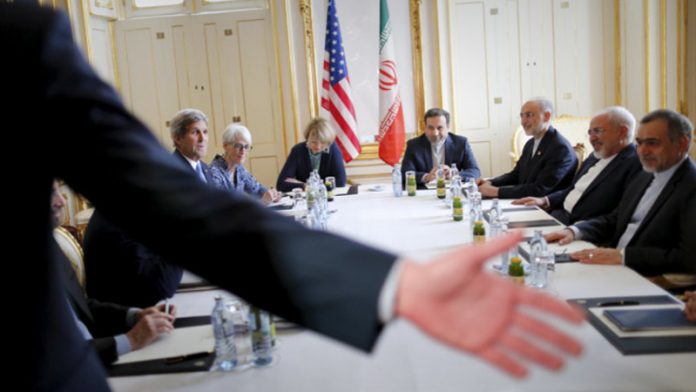 The negotiators at the Iran nuclear talks have given themselves yet another deadline by which to conclude an agreement, but this one is different. Previously, target dates were self-imposed. But external actors hostile to an agreement have forced the latest one, July 7, on diplomats.

Congress has demanded to see a copy of the agreement by July 9, otherwise it has said it will take two months instead of one to review it. Every extra day that the agreement remains in limbo will be a day on which its enemies in Washington, Tehran and Israel are able to rally against it.

To be sure any agreement is delivered to Congress on time and with the correct accompanying documentation, the foreign ministers in Vienna have given themselves a deadline of two days earlier. And they are likely to aim to get it done by the end of the weekend to create a margin for error.

Diplomats from Iran and the six major powers at the talks (the P5+1) are continuing as though this is doable. There has been such dramatic progress, with so many previously intractable issues being resolved, that the idea of stumbling now has become almost unthinkable, notwithstanding the predictable tough rhetoric on all sides.

At the start of this week of extra time, one of the lead Iranian negotiators, Iranian deputy foreign minister Majid Ravanchi, gave  an unusually detailed interview to Georgetown academic Ariane Tabatabai for the Bulletin of the Atomic Scientists, laying out the state of play as Tehran sees it.

One of the points to come out of the interview is that the issue of inspections of Iranian sites does not seem to be a problem any more. Ravanchi said Iran will pass into law the Additional Protocol (AP) of its agreement with the International Atomic Energy Agency (IAEA). This allows for military inspections on a managed basis, but he said it did not imply a free-for-all for Western inspectors to drop in any time on military bases.

“The AP is about providing access to certain areas where there is proof that there have been some alleged wrongdoings, the documents of which should be given to the members. I don’t think there will be any problem in the future on the implementation of the AP,” he said.

More difficult to hide
It is striking how much the language on this issue echoes that of Western diplomats. Inspections will be carried out under the AP. Access will be given to military sites when there are demonstrable grounds for suspicion. A mechanism will be developed under the agreement to resolve disputes. In principle, the IAEA will be allowed to go where it thinks it needs to go, but timing can be negotiated. The thinking is that non-nuclear military secrets can be moved around and hidden if the military is given a bit of notice, but nuclear infrastructure is usually far more difficult to hide.

The more substantive issue to come out of the Ravanchi interview is the centrality for the Iranians on the question of sanctions. Much of the time since a framework was agreed in Lausanne in April has been taken up adding language to the text to ensure that Iranian undertakings to reduce and convert its nuclear programme are made watertight, partly with an eye to the critical scrutiny the deal will get in Congress.

The Iranians now want more time spent spelling out what Iran will get in terms of sanctions relief in greater detail, so as to be sure of what it will receive. This is how Ravanchi put it: “One other point I should emphasise here is that in Lausanne we went into a lot of detail on the nuclear side. We also discussed sanctions, but compared to what we achieved on the nuclear issue, we didn’t get as far. So, this is now of paramount importance. And as I said, if we are going further into detail on the nuclear issue, we need to also do the same on the sanctions issue.”

Some of the detail on sanctions relief involves questions over what will happen to sanctions imposed on Iranian banks or other entities by US states and cities, and what happens to banks or companies that are blacklisted under nuclear-related and humans rights sanctions. The question is whether the Iranian side’s demands are simply about clarity or if it wants to change the Lausanne framework.

The Lausanne “parameters” as published by the US state department say Iran gets sanctions relief after it has taken concrete steps to reduce its nuclear programme: dismantling centrifuges, getting rid of the low-enriched uranium stockpile and taking the core out of the Arak heavy water reactor. This is the US version: “US and EU nuclear-related sanctions will be suspended after the IAEA has verified that Iran has taken all of its key nuclear-related steps. If at any time Iran fails to fulfil its commitments, these sanctions will snap back into place.”

This is what Ravanchi said: “We can’t be expected to do our job, meet our obligation and then wait for the other side to meet theirs. So there needs to be some proportionality here, and we have told our P5+1 partners that Iran is ready to take a number of steps on the nuclear issue … at the first stage, provided we get the assurance that the other side … do their end. We are still talking about all this. But this issue [is] of simultaneity – that Iran will have to do its share and, simultaneously, they have to do their share. But it can’t be based on a principle of the other side waiting until we are done and then deciding what needs to be done. So this issue of simultaneity is something we’ve insisted upon, and I think our colleagues have understood this.”

The US and its allies understand it, but they do not necessarily agree. Hence the repeated reminders from US officials in Vienna and from President Barack Obama on Tuesday that Iran has to stick to the Lausanne principles. Earlier this week, a senior US official suggested that preparations for sanctions relief would be under way while Iran took its steps and that would count as simultaneity.

“We have a lot of preparation to do. It is not something you just turn a switch and all of a sudden it’s gone. There’s not only paperwork but a lot of interaction with financial institutions, developing regulatory guidelines, guidance to banks – tons and tons of stuff. We have to prepare as well. So everybody will get ready, everybody will take their steps, and then when the IAEA has verified, virtually simultaneously whatever commitments we make about the first phase of the lifting of sanctions will occur,” said the official.

Tehran wants something tangible
This is unlikely to be enough for the Iranians, who are now constrained by the public remarks of Supreme Leader Ali Khamenei on the issue. Tehran wants something tangible while it is taking centrifuges apart and yanking the reactor core from Arak. One option is the $100-billion in frozen Iranian assets around the world. The government in Tehran has already earmarked all of it for digging itself out of the mountain of internal debt to the banks and construction sector built up by former president Mahmoud Ahmadinejad. Eliminating that debt is key to getting the country going again.

Whether it is that money that will be key to getting around this stumbling block in the last days or something else, Ravanchi sounded confident it would happen. “I think this can be solved,” he said. – © Guardian News and Media 2015