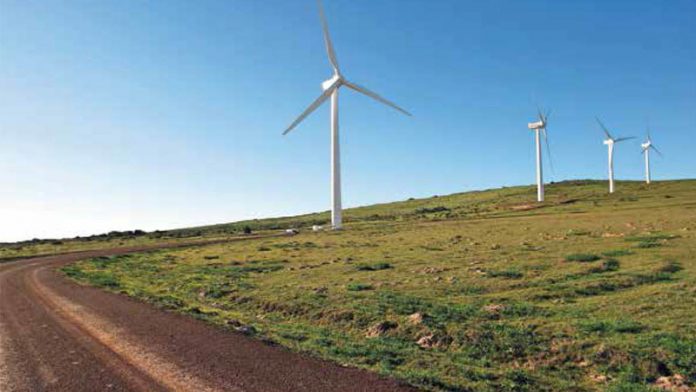 In 2009 the South African electricity grid collapsed. Rolling blackouts dented the economy. At that point 95% of the country’s grid was composed of coal-fired power stations. These emitted 230 million tonnes of carbon dioxide a year — half of the country’s entire emissions. But they had aged and new stations were already running behind schedule.

Renewable energy was unheard of outside the 10-megawatt experimental wind farm in Darling in the Western Cape.

Now South Africa has one of the fastest-growing renewable energy building programmes in the world.

This is run by the department of energy, through its independent power producer programme. So far, 5 200MW of renewable energy has been allocated across five bid- ding windows.

In each of these the department calls for a certain amount of energy, using any kind of renewable technology. Companies then bid, promising to spend a certain percentage of the budget locally, and supply electricity at a guaranteed price. The winning companies then sign an agreement with state power utility Eskom to sell electricity for 20 years.

Investment into the renewable energy sector

The scheme has been hailed across the world. Even renewable central — Germany — has looked to the model as a way of driving private investment into the renewable energy sector. To date, R150-billion has been brought into the country. This is the same cost as Medupi, the world’s fourth biggest coal-fired power station, for more generating capacity.

The Renewable Energy Policy Network for the 21st Century (REN21) report on renewables repeatedly mentions South Africa’s successful programme. This is the most comprehensive yearly look at renewables.

With 800MW of solar photovoltaic built last year, South Africa was the 9th largest market for the renewable in the world. Competitive windows have seen the price for solar electricity drop from R1.10 per kilo- watt-hour in the first window, to 89c per kilowatt-hour in the last window.

The report said: “South Africa led the African continent and retained its place among the top 10 countries in terms of renewable investment.” This increased by 5% last year, to R70-billion, it said.

According to the Public-Private Infrastructure Advisory Facility, the price of solar photovoltaic has dropped by 68% across the windows. Wind prices have dropped by 42%. In the first year of the renewable build, installed wind capacity jumped from 10MW to 570MW.

South Africa leads the world in installing concentrated solar plants (CSP). Clustered in the Northern Cape — which has one of the highest levels of solar radiation in the world — the six plants being built are the only renewable which has storage capacity.

Temperatures that can spike as high as 50 ?C and 350 days of sunlight a year mean the plants can store and supply electricity at night. The 100MW KaXu Solar One plant has already started providing electricity through its 326 000 mirrors. The six plants, when operational, will provide 500MW of baseload capacity to the national grid.

And while the biggest share of the renewable build is taken up by wind and solar photovoltaic, government has been pushing numerous legislative measures to drive renewables. Its solar water geyser programme has rolled out a quarter of its one-million target across the country, particularly in homes that would otherwise be unable to afford electricity for water heating.

The transport department has introduced mandatory blending, which will ensure that petrol will have to be blended with biofuels. Several biofuel plants are being built, thanks to the guaranteed market.

Housing regulations have also been updated, requiring new and renovated houses to generate 50% of their water heated from renewable source.

Municipalities are also embracing the build. The city of Bloemfontein is using turbines inside water pipes to both lower water pressure — to stop leaks — and generate electric- ity. Several mines are using renewables to generate power and heat their plants. Others have proposed that they build entire solar farms to supply their operations, and sell to the national grid.

Local industry has also grown around the build. Groups such as Cosatu have hailed it as a chance for the country to “reindustrialise”.

Companies have to spend 70% of their budget locally, forcing procurement inside South Africa.

Factories are being built in Port Elizabeth and Cape Town — a R300-million factory building the towers for wind farms recently opened in Atlantis outside Cape Town. Solar panel factories have created 500 jobs, with many more created in constructing the renewable plants.

But there have been several hurdles in the process. Concentrated solar thermal is not being built in large capacity because the energy department’s 2010 energy plan did not value concentrated solar properly. It overlooked the fact that the renewable could store electricity, hence making it better than other renewables.

Government also delayed the last renewable window by over a year, almost forcing the closure of some local manufacturing plants. Teething problems have delayed the process — such as Eskom’s inability to connect plants on time — but these have since been worked out.

With Eskom facing a R200-billion shortfall in its budget, the renewable build is seen by the energy department as one way to ensure funding for power generation.

In March, the department said it would be approaching the National Energy Regulator to get a further 6 000MW allocation for renewables. This would more than double their capacity, making them contribute 20% to the national grid — more than the nuclear build and new coal generation.

The South African programme is however still dwarfed by events elsewhere, especially in wind energy. In 2005 the world had 12 000MW of wind capacity installed. It now has 370 000MW installed. A third of this is in China — which built 23 000MW last year alone.

Twenty-four countries now have more than a thousand megawatts of wind energy installed. In total capacity, renewable energy supply grew from 85 000MW in 2004 to 657 000MW a decade later — representing a quarter of worldwide electricity supply.

Africa can have an inclusive, cohesive and sustainable recovery from Covid