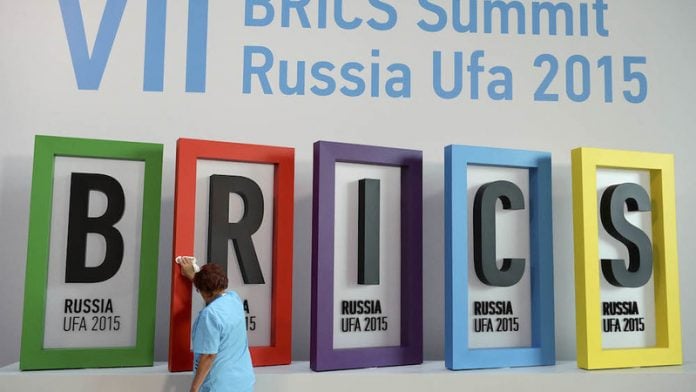 The main point of the Brics summit this week was host Vladimir Putin’s demonstration of economic autonomy, given how much Western sanctions and low oil prices keep biting Russia.

In part, this comes from the nominal progress made by launching two new Brics (Brazil, Russia, India, China, South Africa) financial institutions, though these won’t play a serious role before at least 2016.

That may be too late. Although more than 60% of Greeks used old-fashioned democracy to fight neoliberal bankers’ dictates in Sunday’s referendum, raising hopes across southern Europe and among victims of odious debt everywhere, and although the Chinese stock market has crashed 25% from peak levels a few weeks ago, the bureaucrats running most Brics’ finance ministries and central banks make it clear they won’t deviate from orthodoxy.

The new institutions will complement, and not be critical of, the World Bank and the International Monetary Fund (IMF), as reflected by Pretoria’s two new appointees to the Brics’ New Development Bank (NDB), vice-president Leslie Maasdorp and director Tito Mboweni.

Since the late 1990s, Maasdorp was the head privatiser of South Africa’s state assets, has led a firm driving privatised education (AdvTech), and also worked in the local leadership of the Bank of America and Barclays.

Most conservative in modern history
Mboweni has bragged of learning his central banking skills from the United States Federal Reserve’s notorious free-marketeer and financial liberaliser Alan Greenspan. From 1999 to 2009, Mboweni was the most conservative central banker in modern South Africa history, as well as chairperson of AngloGold Ashanti, until his ill-fated bid to become South African finance minister in 2014.

Ironically, in 2013 when Durban hosted the Brics summit, Mboweni attacked the NDB as “very costly”. “I would rather take that money and build the Coega PetroSA oil refinery here in Port Elizabeth.” Mboweni also chairs a local oil company.

Both Maasdorp and Mboweni have been key advisors to South Africa’s branch of Goldman Sachs, the New York investment bank that was the catalyst for the world financial meltdown in the 2007-2009 period, thanks to rampant illegal lending practices for which its managers were fined tens of billions of dollars but spared criminal prosecution. The bank enjoys revolving-door relationships – and bailout support – in Washington and many capitals.

Goldman’s lead strategist, Jim O’Neill, coined the term “Bric” to describe countries that will be the building blocks for the 21st-century world economy but, like much of the bank’s portfolio, that prediction has gone belly-up since May 2013. At that time, US interest rates rose when Washington’s quantitative easing, dollar-printing emergency era ended. Vast funding flows quickly left the Brics for the North and the past five years have seen four of the five Brics’ currencies routed – and now financial chaos is shafting Shanghai speculators too.

Ongoing turbulence should provide the gap for the $100-billion Brics Contingent Reserve Arrangement (CRA), which is anticipated to open its doors in November.

But it is dollar-denominated and structurally hard-wired to support the IMF. According to the CRA rules, once 30% of a country’s quota is borrowed, based on double the amount of its own contributions (China at $41-billion, Brazil, Russia and India at $18-billion each, and South Africa at $5-billion), then the borrower must go to the IMF.

As Brazil’s neoliberal finance ministry reminded everyone last week, the CRA will merely “provide temporary resources to Brics members facing pressure in their balance of payments”.

For South Africa, this could prove painful if a begging-bowl trip to the IMF is required after borrowing just $3-billion from the CRA to repay the country’s soaring foreign debt.

Inheriting a $25-billion apartheid foreign debt in 1994, the Mandela government kept it relatively low. But, over the past decade, outflows of profits, dividends and interest soared as formerly South African-based firms (Anglo American, De Beers, Old Mutual, SAB, Investec, Gencor, Liberty, Mondi and Didata) shifted funds to London and as 2010 World Cup-related borrowings rose. The debt has ballooned to $145-billion – the same level relative to the size of the economy that was hit 30 years ago when PW Botha’s regime declared a default – so to repay short-term debt in a crisis would soon exhaust the $3-billion Pretoria can access from the CRA. Then the IMF would march in.

There appears no hope that Greece will buck the IMF and European bankers on debt repayment by finding a new bail-out partner. Early rumours that Moscow would invite Athens to join the Brics proved cruelly deceptive.

The Brics’ neoliberal financial elites have chosen a collaborative, deputy-sheriff role in global financial imperialism rather than creating a genuine alternative.

On the other hand, once launched in 2016, the NDB could well fund projects in other middle- and low-income countries. But these are likely to be the kind of controversial pro-corporate infrastructure deals the World Bank finds increasingly difficult to support because of protests over, for example, the displacement of people and climate change through projects such as mega-dams and coal-fired power plants (Eskom’s disaster-riddled Medupi is the World Bank’s largest-ever loan at $3.75-billion).

Coal dependence
Speaking at the Civil Brics conference in Moscow last week, the Delhi-based Vasudha Foundation’s Srinivas Krishnaswamy said the NDB and the CRA should be considered “in the light of a new World Bank energy strategy which restricted funding of coal projects for developing economies. This was opposed by India, South Africa and other countries dependent on coal to satisfy their energy requirement.”

A genuine alternative with social and ecological financing strategies was once proposed and seed-funded by the late Venezuelan leader, Hugo Chavez. But South Africa refused to support it and the Brazilians sabotaged it, so “the Bank of the South” now appears stillborn.

The Brics are helping critical academics answer a crucial question: Is the new bloc as anti-imperialist as the times demand, or just a sub-imperialist ally of the worst elements of the West, its banksters? The latter answer appears to be more likely, just when a break from world financial chaos is most desperately needed.