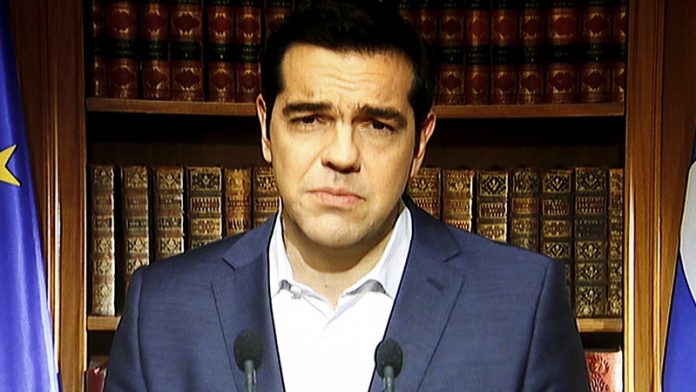 A weekend of high tension that threatened to break Europe in two climaxed on Sunday at a summit of eurozone leaders in Brussels where the German chancellor, Angela Merkel, and President François Hollande of France presented the Greek Prime Minister Alexis Tsipras with an ultimatum.

The ultimatum – debated over more than 15 hours – entailed a surrender of fiscal sovereignty as the price of avoiding financial collapse and being ejected from the single currency bloc.

Tsipras acquiesced in most of the fiscal rigour demanded of him in four pages of summary instructions drafted by eurozone finance ministers.

But as Monday morning broke over Brussels, he was still resisting the creditors’ demands on two key points – on having the International Monetary Fund involved in a proposed new three-year bailout, and on a controversial German demand for Greece to park €50-billion in assets outside Greece, probably in Luxembourg, to serve as collateral for fresh loans and to provide privatisation proceeds to be used for debt servicing,

Greek officials insisted that 17-billion worth of assets was as far as they could go.

The severity of the eurozone terms being applied to a country on its last legs shocked Greeks.

It remained to be seen how Tsipras would be received when he returned home from the climactic negotiations of the five-year debt crisis.

Social media sites throbbed with outrage. The hashtag thisisacoup soared to the most trending in Europe, in Greece but also in Germany where Der Spiegel described Berlin’s demands of Athens a “catalogue of horrors”, and to the second highest trending worldwide.

In what a senior EU official described as an “exercise in extensive mental waterboarding” to secure Greek acquiescence to talks on a third bailout in five years worth up to €86-billon, Merkel and Hollande had pressed for absolute certainty from Tsipras that he would honour what was on offer.

Under the terms set before Tsipras, the Greek Parliament has to endorse the entire package on Monday and then pass several pieces of legislation by Wednesday, including on pensions reform and a new VAT regime, before the eurozone will agree to negotiate a new three-year rescue package.

The terms are much stiffer than those imposed by the creditors over the past five years. This, said the senior official, was payback for the emphatic no to the creditors’ terms delivered by the snap referendum that Tsipras staged a week ago.

“He was warned a yes vote would get better terms, that a no vote would be much harder,” said the senior official.

The Eurogroup document said experts from the troika of creditors – the IMF, European Commission and European Central Bank – would be on the ground in Athens to monitor the proposed bailout programme. The trio would also have a say in all relevant Greek draft legislation before it is presented to Parliament. Furthermore, the Greeks will have to amend all legislation already passed by the Syriza government this year that had not been agreed with the creditors.

While Greece’s fate was being debated in Brussels, in Athens the ruling leftwing Syriza party was showing signs of disintegration. Demands that the reforms be approved by the Greek government and put into law by Wednesday were described as “utter blackmail” by leading party members and met with disbelief.

Although sources close to Tsipras said the leader was determined to do whatever was needed to keep Grexit at bay, political tumult also beckoned. Insiders conceded that a cabinet reshuffle – removing ministers who had refused to vote the austerity package through Parliament early on Saturday – could come as early as Monday.

By late Sunday night it had become clear that Tsipras’s U-turn on measures he had once spurned had produced a potentially far-reaching split. In addition to 17 MPs breaking ranks at the weekend – stripping his government of a working majority – 15 other lawmakers also indicated they would not approve the agreement in its entirety. The resistance raises the spectre of Tsipras being forced to call fresh elections – a move described as potentially catastrophic for the country.

“Greece can bend up to a point,” said Aristides Hatzis, a prominent political commentator. “But after that there is no bending, only breaking.”

Although billed as the last chance to secure “the ultimate agreement” on the Greek debt crisis, the prospects of a grand political bargain to keep Greece in the eurozone are far from assured.

Entering the leaders’ meeting, Tsipras said he was looking for compromise: “We can reach an agreement if all parties want it.”

But France and Germany are split on their approach to the Greek question , while Finland could refuse outright to sign up to a third bailout for Greece.

France’s Hollande vowed to do everything possible to get an agreement on Sunday night, but Merkel said there wouldn’t be an agreement at any cost.

Other eurozone countries urged Germany to drop its objections. “Grexit has to be prevented,” said Jean Asselborn, the Luxembourg foreign minister. “It would be fateful for Germany’s reputation in the EU and the world.

“Germany’s responsibility is great. It’s about not conjuring up the ghosts of the past,” he told German newspaper Süddeutsche Zeitung. “If Germany goes for Grexit, it will trigger a deep conflict with France. That would be a catastrophe for Europe .”

Italy’s prime minister, Matteo Renzi, was expected to tell Merkel at the leaders’ meeting that “enough is enough” and the eurozone should not humiliate Greece when it had already given up so much.

Earlier on Sunday, eurozone finance ministers said they had made some progress after 14 hours of talks over two days and failing to reach any agreement on Saturday. “We have come a long way, solved a lot of issues, but some big issues still remain,” said Jeroen Dijsselbloem, who chairs the Eurogroup of finance ministers.

Donald Tusk, the president of the European Council, cancelled an emergency full summit of the 28 countries that was to deal with the fallout from Greece’s ejection, in order to give eurozone leaders a last chance to reach an accord saving Greece and forestalling what would be a devastating schism, sowing deep resentment and division between Europe’s leaders.

The intractable problem is that many governments do not trust the Greek government to implement a €12-billion programme of spending cuts and reforms that will be delivered as part of a bailout. Eurozone governments are seeking proof from Athens it can keep its promises, in exchange for agreeing to start talks on a deal.

“The main obstacle to an agreement is trust,” said Pier Carlo Padoan, finance minister of Italy , one of the countries most sympathetic to Greece.

The Irish taoiseach, Enda Kenny, urged his fellow leaders to “look at the bigger picture”. Kenny, who has been Ireland’s leader since the early days of its own bailout programme, said in his country’s case trust was built incrementally.

“We don’t want to look back in 10 years’ time and think this could have been saved, but wasn’t,” he said.

The German news magazine Der Spiegel called Sunday the biggest day of Merkel’s 10-year chancellorship and appealed to her to “show greatness” and save Europe .

If Der Spiegel was right about the momentousness of Merkel’s day, the same could be said for Hollande of France who, with his government and officials, has been campaigning tirelessly in recent weeks to keep Greece in the euro, helping Athens to draft its proposals.

A decision to go ahead with a so-called Grexit, which has never been closer, would be a shattering failure for Hollande and the resulting Franco-German recrimination would be deeply damaging, say observers. – © Guardian News and Media 2015

South Africa is disproportionately targeted by cybercriminals. Digital attacks call for digital solutions and technology is a the prime weapon in this fight
Read more
Business