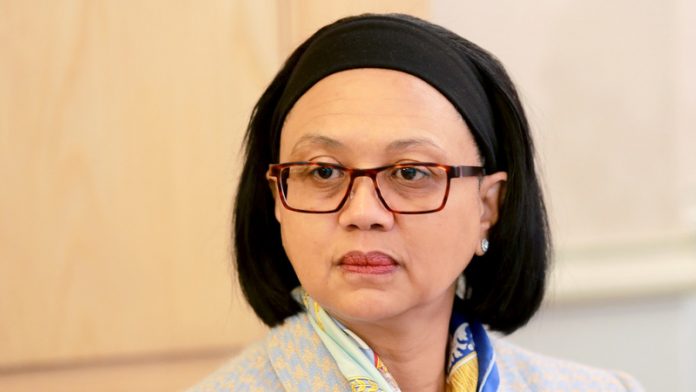 In another week of high drama at the state-owned Nuclear Energy Corporation of South Africa (Necsa), the board has attempted to “summarily dismiss” chief executive Phumzile Tshelane for allegedly “withholding information” from the auditor-general.

The board majority wrote to Tina Joemat-Pettersson, the energy minister, last Friday to complain that Tshelane’s conduct towards government auditors had resulted in the auditor general provisionally disowning Necsa’s 2014-2015 financial statements with a “disclaimer”.

But Joemat-Pettersson ignored their pleas this week by extending Tshelane’s contract “on [a] month-to-month basis … until further notice”. Tshelane’s three-year contract as Necsa chief executive was set to expire on Friday July 31.

Looming large over these latest developments is government’s R1-trillion nuclear new-build ­programme led by the energy department. The department had said that it would launch the procurement ­process by the end of July.

Billed as the most expensive project in South African history, it has  raised concerns among energy experts for its perceived unaffordability and potential to saddle the country with enormous debt and above-average electricity prices for decades to come.

Justifying her decision to retain Tshelane, Joemat-Pettersson wrote to the board on Tuesday, saying that, “in light of the pivotal role Necsa is playing in the nuclear new-build programme, it is important to maintain stability and continuity in this organisation during the … procurement process”.

Suitability questioned
But the board members are similarly mindful of the impending nuclear programme, and question Tshelane’s suitability to perform a key role.

They wrote to the minister: “The nuclear industry is one that prides itself in transparency, especially when it comes to compliance, safety and financial accounting.

“The very future of nuclear in South Africa depends on these pillars to assure that nuclear energy should not be feared, but embraced.

“The actions and conduct of the CEO … have trampled these very values and made a mockery of the government’s efforts to ensure a world-class nuclear industry, in preparation of the planned nuclear new-build programme.”

But Joemat-Pettersson strengthened Tshelane’s position this week by also recalling one of her nominees to the board. Department official Jeetesh Keshaw had fallen in with the small but vocal board majority that has been gunning for Tshelane, and has now been replaced.

This is not the first time that Joemat-Pettersson has shielded Tshelane.  AmaBhungane has reported how, in December last year, she told the board to open disciplinary proceedings against him on several charges but later recanted and instead launched her own inquiry into the board.

The board may also have overplayed its hand by issuing Tshelane and chief financial officer Zakes Myeza with letters of summary dismissal over the annual audit.

However, following the minister’s intervention, the letters were never delivered.

The Nuclear Energy Act gives the minister the power to hire and fire chief executives of state-owned companies allocated to her and she is likely to contest the board’s power to exercise this right concurrently.

The audit trail Tshelane wrote to auditor general Kimi Makwetu this week to protest about his auditors’ handling of the audit.

It remains to be seen whether Makwetu will now modify the disclaimer.

The board audit committee’s concerns, which amaBhungane has seen in writing, included:

But in his letter to the auditor general, Tshelane complained that “basically the auditors have not had time to audit and apply their minds sufficiently to arrive at a well-considered audit opinion”.

The chief executive took issue with the “inconsistent treatment [by the auditors] of the liabilities associated with decommissioning and decontamination” and the “enormous amount of time and effort spent unnecessarily in this area”.

Flatly denying that Necsa had refused the auditors access to information, he lectured Makwetu: “It is inconceivable that auditors can spend more than three months applying resources to audit and not be able to satisfy themselves with audit evidence.”

South Africa will make a $49 billion profit on a $50 billion nuclear power station fleet, if a utopian report is to be believed.
Read more
National

Nuclear storm brews as board tries to oust energy chief

Necsa faces a leadership crisis at the precise moment the government is on the cusp of issuing the main tender for the nuclear build project.
Read more
Opinion

The South African Nuclear Energy Corporation claims "some myths have been deliberately perpetuated about the company".
Read more
National

An ugly battle over the suspension of Necsa's chief executive has split state nuke company down the middle.
Read more
Advertising
Continue to the category
Politics