Getting a rise out of Croissants 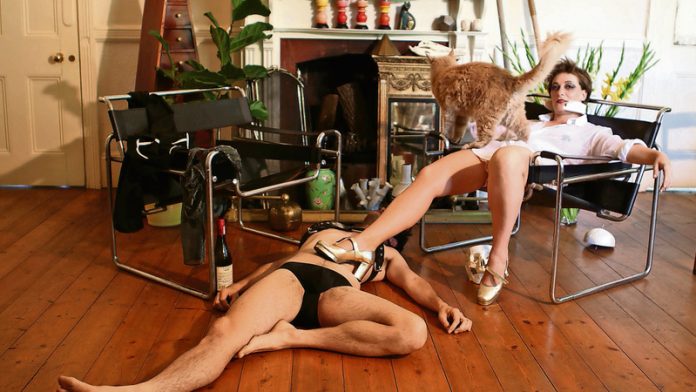 Just when you might have thought the Wits 969 festival pickings couldn’t possibly get more sophisticated there was We Didn’t Come to Hell for the Croissants.

It’s a novel bit of storytelling theatre created by Jemma Kahn and performed by Kahn alongside Roberto Pombo. It wowed the National Arts Festival audiences and featured on the front page of the festival’s daily publication Cue.

Croissants is a rollicking, rude interpretation of the ancient Japanese storytelling culture of kamishibai caught in a riff of South Africanisms, conjoined with one of the slickest, freshest and darkest reflections on death, explicit orgiastic sex and all that hides in between, that arguably has been staged on South African stages for a while. Kahn explained its evolution to the Mail & Guardian.

As each story begins, there’s a cover sheet, with bylines of the people who wrote the stories and those who created the illustrations. How did you choose them?
I approached the writers I wanted to work with and they said “yes!” Then they came back to me with ideas and I tried to curate the show, making sure the stories covered a broad spectrum of styles and themes. It was educational being able to collaborate with so many people doing the same thing – writing a 10-minute story. The illustrators were matched with stories and off they went.

In all, there were by my tally – including graphic designers, costume designers, set builders, actors, our director Lindiwe Matshikiza, writers, illustrators, producers – a total of 22 people necessary to make this show. That’s not a lot for a big theatrical extravaganza, but for a little fringe show it’s ridiculous and I am so very proud.

Tell me about your time spent in Japan, and how productions like Croissant’s predecessor,The Epicene Butcher and Other Stories For Consenting Adults developed.
I graduated in 2006 with a drama degree from Wits University and found myself windgat; there was no work to be had. So I went to Japan to teach English, and there I saw kamishibai [a storytelling culture, comprising a miniature stage, drawings in chronological sequence, and a storyteller], which now I can safely say was life-changing for me.

When I came back, I had the artillery to make my own work – an intimate understanding of the nuts and bolts of kamishibai and the creative team of John Trengove and Gwydion Beynon. To this day, the phone has never rung; no one has ever phoned me to put me in their play.

After the success of Butcher – and to a lesser extent, though I bloody love that play – our second play Amateur Hour!, which was created in collaboration with Glen Biderman-Pam, John, Gwyd and I, we went our own ways to busy ourselves with different creative projects. John is about to shoot his feature film, Gwyd wrote the play El Blanco: Tales of the Mariachi, which won a gold ovation award at this year’s National Arts Festival, and Glen is becoming the most famous stand-up comedian with the tiniest eyes in Johannesburg. The Croissants team is united by a strong inclination towards sex and the absurd.

In Croissants, we have the curious character Pombo, armed as he is with a revealing costume, a shiny red piano accordion and various other implements to create sound effects. Tell me about the development of this foil.
Chalk Girl was invented by John for Butcher to distract the audience from the mechanics of changing between one story and another. Although a distraction is no longer necessary – I’m much faster in operating the slides – a foil is necessary. That’s the brilliance in both shows, of the second performer. They are providing as many flavours as I am, between each story.

They are the direct conduit between audience and performance because they are so lovable. That was always the main concern when casting a Chalk Girl or Boy: Are they lovable? Roberto’s role is substantial in Croissants, because he’s so talented and watchable and fearless. Lindiwe and I tried to squeeze as much out of him as was proper.

How did the name of this show come into being?
I stole it from New York Times journalist Adam Gopnik, from his essay Through the Children’s Gate: Of a Home in New York.

I know there’s a POPArt season for the work during August, but beyond that, what offers to travel has Croissants had, so far?
There are lots of lovely offers on the table. What we can confirm now is a run at POPArt Theatre in Maboneng, downtown Johannesburg (August 26-30), and a substantial run in Cape Town towards the end of the year.