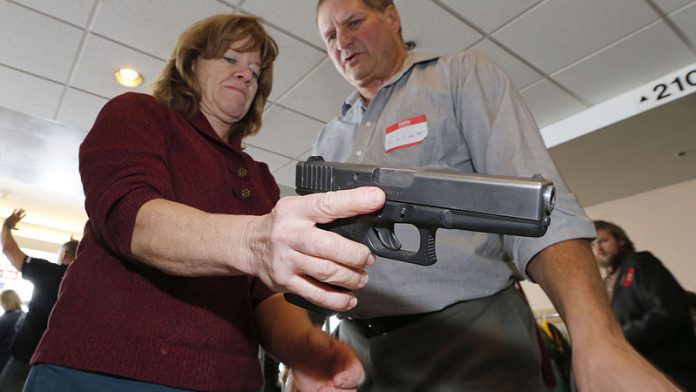 When police officers put on their badges and uniforms, do they somehow change inside? Surrounded by stories of pepper-sprayed protesters, threats at traffic stops, and sudden bursts of violence sometimes causing deaths, the United States has spent a year asking itself about police misconduct, with the question “why?” uppermost in its mind.

For decades psychologists have looked for evidence that weapons affect behaviour, and a large body of research has borne out their suspicions: simply seeing a weapon – whether a sword, rifle, hand grenade, dagger, tank or gun – makes people more aggressive.

Ohio State University psychology professor Brad Bushman said that research has shown humans respond as quickly to guns as to spiders and snakes, though unlike that impulse the effect must be at some level a learned response.

“Weapons increase all of those aggressive thoughts, feelings, hostile appraisals and the type of thinking that somebody’s out to get you, or wants to hurt you,” Bushman said.

Aggressive impulses can sometimes be strong enough to override common sense, studies have found. Confronted with a pick-up truck driver who had stalled at a green light, drivers in one 2006 study were more likely to honk at the truck if they had a rifle in their car than if they weren’t carrying a weapon.

Increased paranoia
Studies have also shown that carrying a gun tends to make people more likely to deliver electric shocks, increase paranoia about people and objects, and increase testosterone levels (the “vast majority” of perpetrators of gun violence are men, according to the American Psychological Association).

The toolkit of police in the US often includes a handgun, Taser and nightstick, and many departments also have the assault weapons, riot gear and armoured vehicles that transformed Ferguson, Missouri, into an illustration of militarised police action. The surfeit of weapons probably makes both officers and people around them more aggressive, the experts said, regardless of the type of weapon they are carrying.

“Tasers can be as deadly as a gun, and the nightstick is not a peaceful tool,” said Maria Haberfeld, a professor at the John Jay College of Criminal Justice in New York. “A gun is a gun, handcuffs are handcuffs. When officers are in full gear it definitely has an impact on their jobs as opposed to officers without.”

Haberfeld compared police violence in the US to the much lower levels in Ireland and the United Kingdom, where police usually go without guns, but she also argued that some gear, and at least the threat of force, is necessary to effective policing.

“A police officer at any moment is outnumbered by members of the public,” she said, “so if we eliminate this implied notion of coercive force then we eliminate the difference between the public and police. In essence, policing as a profession is about the use of force – not necessarily physically, but the notion of it.”