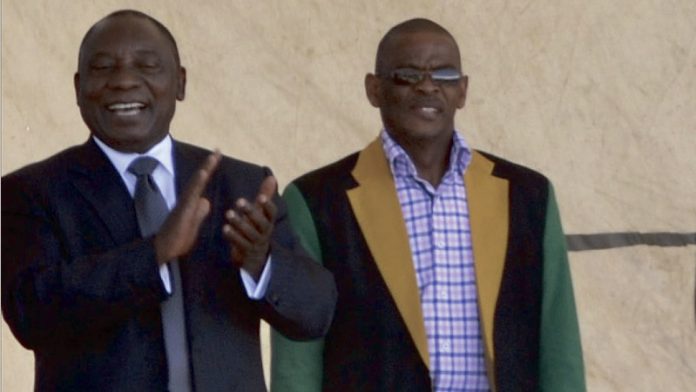 “The ninth of August is an important date in the history of South Africa. A day we commemorate to pay tribute to selfless and gutsy women, who refused to fold their arms when their freedom of movement was curtailed through the dompass system and many other draconian policies of that era that denied black South Africans the right to live as human beings,” said Free State Premier Ace Magashule, addressing a massive crowd at the Harry Gwala Stadium in Sasolburg.

The premier named several of South Africa’s women pioneers, and said that while Woman’s Day reminds us to celebrate their heroic deeds “it also calls on us to embrace the same bravery to confront today’s societal challenges”.

“Acknowledging that women’s role in this task is of utmost importance, we persistently recommit ourselves to women’s empowerment and [their] inclusion in all spheres of life. This is not rhetoric. The ANC-led government has implemented various interventions to address gender equality and affords women the same status as men.

“We have not abandoned the ideal of striving for a society that is truly non-racial, non-sexist, united, democratic and free of all forms of discrimination,” said Magashule.

“Our resolve to adopt the policy decision on 50/50 representation of women in all structures has gone beyond oratory and in the Free State we are leading the pack, with five female MECs: Dora Koetzee, public works and infrastructure; Elsabe Rockman, treasury; Mathabo Leeto, sports, arts and culture; Olly Mlamleli, human settlement, co-operative governance and traditional affairs; and Sisi Ntombela in the social development portfolio, who has also just been elected as the deputy president for the ANC Woman’s League.”

Magashule said the provincial government departments and municipalities had a fair representation of women in senior positions, but that further action is ensuring the participation of women in the economy. The procurement of goods and services from women-owned enterprises has been escalated to give effect to the Preferential Procurement Policy Framework Act, 2000.

He further said that more than 50% of jobs created through the Expanded Public Works Programme (EPWP) benefit women, and through working with women in transport and logistics government has extended the manganese packaging facility at Transwerk.

“A total of 20% of our investments in human settlement projects have been allocated to women and youth, and we intend to increase the percentage to attain the set 60% national target,” said Magashule, “And almost 70% of the beneficiaries of our housing projects are women.”

“Our comprehensive HIV and Aids strategy is yielding positive results, among the highlights being the reduction of mother-to-child transmission. The awards that our women in agriculture receive at national competitions are indicative of the support we provide to female emerging farmers.

“We have confronted acts of human trafficking head-on on a number of occasions. This is a crime against humanity, which requires a special, multidimensional approach to eradicate all its causes. We know that poverty and unemployment increases the vulnerability of women to human traffickers. In response to this, we took more than 20 women who plied their trade in the streets and enrolled them at educational institutions. As we intensify efforts to rescue women and young girls from this act of barbarity, we will show no mercy to the perpetrators of this ruthless industry.”

Magashule concluded by saying that the day celebrates women who have made it in all spheres of life and remembers the struggles of women over the decades, particularly women’s struggle in South Africa.

“The Free State reaffirms its obligation to gender equality and women empowerment to advance nation building. Access to education, health and skills will remain biased towards women, including disabled women, as they have the potential to change societies.  We will ensure strict implementation of policies and legislation aimed protecting and empowering women.

“We have made satisfactory strides thus far. However, a lot still needs to be done to give women equal opportunities in the economic and political environments. Working together, we will achieve this goal.”