A tale of the little bank that could 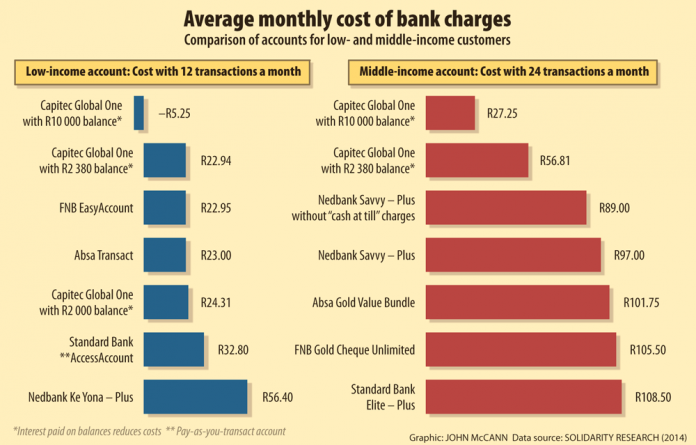 Capitec Bank found itself in a tough neighbourhood when it entered the banking sector about 14 years ago. But with a combination of ultra-low banking fees and deposit rates dwarfing bigger competitors, it’s punched above its weight and today boasts almost 20% share of retail banking clients.

The neighbourhood – unsecured lending – has been so rough, its major opponent, African Bank, fell over a year ago and is in curatorship as authorities seek to refinance it.

But Capitec has shrugged off any contagion – its share price has doubled in the past 12 months to its present capitalisation of R52-billion and its loan book has grown 8%. Capitec’s widely publicised offering, which charges customers fees from R5 a month while they earn interest of up to 5% a year on standard transactional accounts, makes it a significantly cheaper option than its major competitors. (See below: “The hard work has been done for you”).

An annual report from Solidarity, which compares banking fees, noted that in 2014 Capitec was the cheapest option overall – but competitors were narrowing the gap. This year, Absa brought down some of its fees and First National Bank announced in June that monthly fees for its most popular accounts would remain at 2014 rates for the 2015-16 financial year. Standard Bank froze or reduced fees for some accounts, but also reduced some benefits.

Growing client base
Fourie said: “About 30% of our clients earn more out of our interest rates than what they pay on banking fees. For fixed-term funding, Capitec offers a slightly higher interest rate than the market, but at one to 24 months, it is slightly lower. Capitec’s biggest drive is growing client base. The guy who deposits his salary with Capitec will be more likely to make use of its other services.

“On average, banking clients make 32 transactions monthly, and non-banking clients [whose salaries are not deposited into a Capitec account] make about five a month.”

Capitec doesn’t offer credit card facilities or overdrafts – but it offers unsecured loans and currently holds 26% of that market. But to lend a rand, a bank needs a rand deposited. Unsecured loans aren’t backed by assets. These riskier loans do offer higher margins, however.

Sanlam Investment Management Global’s Kokkie Kooyman said Capitec’s deposit base needs to grow faster than that of other banks because its loan book is growing faster. Loan book growth slowed from 10% in 2014 to 8% this year. Indeed, the “big four” banks – FNB, Standard, Absa and Nedbank – have pulled back from the unsecured lending market.

In the other loans and advances category, including unsecured and personal lending, the major banks’ combined portfolio decreased by 3.3% in the six months ended December 2014; growth of 2.7% was seen, compared with December 2013.

The 2014 PwC major banks analysis said: “The trend in this product category clearly reflects the strategic decisions of the major banks to limit their exposure to unsecured lending portfolios.” Fourie said because Capitec is bigger in the unsecured lending space, it faces higher funding requirements than the big four banks. These requirements are set by the Reserve Bank. Fourie said this is suggested in the bank’s capital adequacy ratio – the ratio of a bank’s capital to its risk – which is “quite high” at about 37%.

36One Asset Management’s Nico Smuts said South Africans get value for money in transactional banking and interest rates on personal loans didn’t appear out of line with those of other nations. But “unsecured loans are a different story”. The true cost of unsecured borrowing is often hidden in initiation and monthly administration fees and credit life insurance, which can amount to multiples of the interest cost.

“Although proposed regulation has curbed excessive pricing in credit life insurance, lenders still have a lot of leeway to increase the effective interest rate through other fees and charges,” said Smuts.

“There are still lenders who make excessive profits by saddling borrowers with unnecessary charges. This can be done legally but is clearly against the spirit of the law. The department of trade and industry recently published a draft proposal to reduce maximum interest rate on unsecured credit by roughly 8%.”

Capitec’s emphasis on unsecured lending raises concerns about risky business. But of all credit applications, Fourie says 44% are approved. And even so, only 29% of applicants will take it up the loans.

Capitec’s drive to bring retail customers on board is because it prefers funding through retail deposits rather than wholesale. Retail deposits (money deposited by individual customers) account for 65% of overall funding. Wholesale funding, including from institutional investors or the bond market, makes up the balance.

Capitec’s latest annual results showed retail call deposits were up by 32% between 2014 and 2015, retail fixed deposits grew by 19% and wholesale funding was down by 6%.

In its annual report Capitec said African Bank’s curatorship in August 2014 triggered tougher conditions in the wholesale funding markets, and all banks had their ratings downgraded by Moody’s rating services.

“Risk spreads widened and issuance on the local bond market declined across sectors. While the supply of wholesale funding to the market has started to improve, the cost of funding remains more expensive than pre-August 2014 levels and will remain so for some time.”

Capitec’s credit ratings affect how it attracts wholesale funding. These ratings, and those of major South African banks, were downgraded two notches in the financial year under review, after African Bank was placed under curatorship.

Capitec is often criticised for its reliance on retail funding, as the big four place more emphasis on wholesale funding.

Kooyman said: “Wholesale is cheaper, but leaves quickly … Retail deposits are generally safer and stickier. Capitec has paid very high deposit rates for the past five or 10 years, but it is best [to] have a good mix of retail and wholesale funding and a mix of short- and long-term deposits.”

If your bank needed your deposit, you would know it as they would increase their deposit rates. Banks’ deposit rates effectively react to surpluses or shortages in available savings as well as competition amongst themselves. Banks primary responsibility is to their shareholders and not to offer consumers favorable rates.”

He said there are concerns that the lower end of the market is overburdened by debt.

Capitec said it has been circumspect in granting loans – it has not rushed in to fill the void, but has focused on identifying and lending to better-quality credit clients.

The major banks’ non-performing loans, relative to the size of their lending portfolios, amounted to 3% of total advances at end 2014. For Capitec, net impairment to average gross loans and advances was 11.5%.

The hard work has been done for you

Solidarity’s bank charges report for 2014 aims to clarify banking fees by creating four profiles – of customers with different income groups – and using a measure based on the monthly banking services these four types of clients would typically require.

This helps to see past the window dressing of low administration fees.

Capitec, the bank with the simplest offering, came out as the least expensive overall. The report noted that Absa and FNB in particular had developed relatively cheap (even less than the R5 in admin fees) competitive accounts, but “due to the fact that Capitec’s Global One account pays appreciable interest on any positive balance, this account can still be crowned the cheapest”.

The value a customer receives varies widely from bank to bank depending on the number and type of banking services required. But the report warned that anything more than R120 a month was likely to be too high.

From the first rand in a basic transactional account, a Capitec customer would earn 4.5% annual interest. At Standard Bank, for example, anything less than R999 will earn you nothing. Thereafter you would need between R50 000 and R99 999 to earn an effective interest of 2.99%.

​What you should know when buying a car