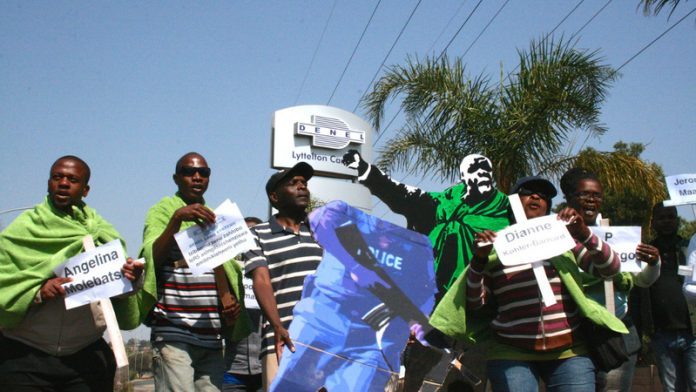 Amandla.mobi campaigner Koketso Moeti is one of the organisers of a protest that happened outside arms manufacturer Denel’s Centurion offices on Thursday morning. The protest was in support of community advocacy organisation Amandla.mobi and Gun Free South Africa’s call on national police commissioner Riah Phiyega and Police Minister Nathi Nhleko to ban the use of R5 assault rifles in public order policing units.

She told the Mail & Guardian that by using R5 rifles, the state was suggesting that “it is in a war against its citizens”.

Protesters draped themselves in green blankets reminiscent of the iconic man in the green blanket, Mgcineni Mambush Noki, who was one of 34 miners killed by police at a platinum mine protest in Marikana in 2012. Sunday August 16 marked the third anniversary of the massacre.

One of the protesters, Bongani Radebe, told the M&G he was excited to be adding his voice to the 15 other protesters who had gathered outside the offices.

“We are feeling excited because we are giving them a strong message to say we don’t need these R5s for crowd control,” he said. Singing and whistling could be heard in the background as he spoke. “If people were using pistols at Marikana, it would have been different. We are not saying Denel must not create R5s, but they must give them to soldiers, not to police for crowd control.”

Another protester, Paul Mason, said each protester held up a placard with the name of one of the members of the police portfolio committee on it. “The decision about using these rifles will be made by them next week in Parliament. We are sending a message to them to ask them to ban the police from using these rifles, particularly in crowd control.”

A petition with 2 000 signatures had been sent to Parliament demanding the same, he said.

Avoiding another Marikana
Moeti told the M&G that the Farlam commission of inquiry into the Marikana massacre found that the use of R5s in public order policing was “inappropriate and should therefore be prohibited”.

Citing the Farlam commission report, she said 224 of these rifles and 4 000 rounds of ammunition were deployed to Marikana prior to the massacre. She said the rifles fire 650 to 700 rounds a minute at a velocity of 920m a second and have a firing range of up to 500m. Police officers use the rifles during crowd control operations across the country.

“When Phiyega testified at the commission on September 10 last year, she told the commission that R5 rifles were still being used in public order operations and that the police were ‘still considering the matter’. Police might not fire them but they carry them in places like Hillbrow quite regularly for things like evictions or protests against evictions.”

Marikana has given South Africa a moment to engage on the necessity of rifle use during crowd control. “Here we have an opportunity to say never do we want a Marikana to happen again and to safeguard future protesters.”

Moeti said Nhleko would brief the police portfolio committee on the implementation of the Farlam commission recommendations on August 26 and that Parliament would debate the report in the next two weeks.

“Parliament’s debate on the [report] is the ideal opportunity to deliberate on the unambiguous recommendation to prohibit the use of R5 rifles in public order policing.”