Where to for the cancelled Sauti za Busara festival? 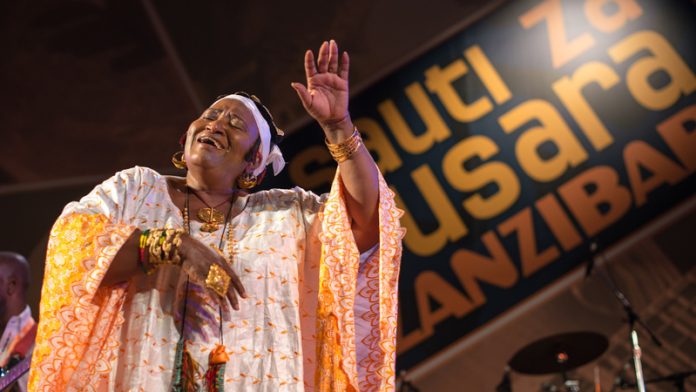 Sauti za Busara festival director Yusuf Mahmoud announced on August 25 that the 2016 leg of the annual music festival held in Stone Town, Zanzibar was cancelled, citing a lack of funds.

Two years ago I had stood on one of the outer walls of the fort where the well-attended festival is held and listened to Mahmoud muse about the festival’s beginnings and its place within the East African music scene. What he said then in his sometimes jilted, contemplative speech outlined the foundations of a festival bent on offering an alternative to the onslaught Western music was waging on East African audiences. And what he said in a recent conversation after the one-year cancellation reaffirms that same purpose but with a confession of the need to be financially savvy and a more sustainable model.

2013
Setumo-Thebe Mohlomi:  How did Sauti za Busara start out and what was your role in making the festival a reality?
Yusuf Mahmoud: I came to Zanzibar first in 1998, from the United Kingdom. In my first overview of Zanzibar I was quite shocked to see most young people listening to foreign music; and when I say foreign music I mean mostly from Europe and the United States. I felt that there was a niche to give a platform for [local] talents to showcase the amazing work they do. So when we started Sauti za Busara in 2004 the programme was almost exclusively Tanzanian. Within a few years it became what we called Swahili Music Festival, integrating music from Mozambique, Kenya, Tanzania and of course, Uganda. Curating wise, what I’ve done over the last 10 years is always try to get a balance of about 50% Tanzanian, 60 to 70% East African and then have space for artists from Southern Africa, the diaspora and so on. I realised that seeing musicians from Senegal, South Africa, Zimbabwe, Mali or Nigeria, for example, play their music which is really rooted in the traditional but moving in a modern forward direction is actually helpful for East African artists to develop their music.

S-TM: What has the journey been like in terms of your audience development, as well as brand growth and sustainability?
YM: Actually one thing that has really surprised me is that we’ve had huge audiences every year for the last 10 years. In the early years, the first festival was outside in the [Forodhani] gardens and we had about four or five thousand people coming every day and they were almost exclusively Tanzanian, and most of them from Zanzibar. There were some international people coming from Europe and North America and other places but very few. And then for the second edition it became 20% foreigners and 80% local. And then it was 70% local to 30% foreigners, and then it was 60% local to 40% foreigners. So the number of international visitors rate is growing very rapidly. The number of regional visitors is growing but very slowly.

S-TM: What kind of conversation do you have with European and US musicians who are interested at playing this festival?
YM: Because the name of our festival is Sauti za Busara, which means sounds of wisdom, we’re not really motivated to put on young boys singing about fast cars and fancy big fat-bottomed girls or whatever. We really feel strongly that part of the strength of this festival is that it’s focused on promoting music with an African identity – and I mean it in a very loose, diverse, broad sense. So we’re really looking for artists from the diaspora outside Africa who are representing Africa somehow.

2015
Setumo-Thebe Mohlomi: So how are you feeling after having to cancel Sauti za Busara 2016?
Yusuf Mahmoud: We’ve had the festival every year since 2004 and this is the first time in 14 years that we were forced to cancel. It’s been a really tough decision because a lot of people were disappointed by the news. But we hope that this will be a step towards coming back stronger from 2017 onwards.

STM: In 2013 we spoke about the Tanzanian government not really coming on board in terms of funding. Has that changed in the last two years?
YM: I wish I could say yes, but unfortunately Tanzania is not like South Africa. I know artists complain in South Africa but at least you do have departments of arts and culture, Samro and ConcertsSA that do give funds to artists and their mobility, and to festivals. So remain grateful for the little support that you do get in South Africa because even after 12 very successful editions we’ve received zero financial support from our governments in Zanzibar, in Tanzania and of course the East African community. Not only do we actually receive zero, but we we’re requested to pay a lot of money every year for registration, for licenses, permits, visas and a lot of taxes. So rather than [the governments] building a successful event and keeping it alive to promote cultural tourism for many years to come, it’s quite the opposite.

STM: Do you think that it’s been worthwhile sticking to your guns in terms of your music selection?
YM: We’re certainly doing a lot of soul searching in the discussions we’ve had over the last few months. The question is if we are looking for this to be more sustainable, do we need to adapt it a bit? I think when it comes to arts and the way that we dress, the food we eat, the music, our cultural traditions, I think here in Africa we really have a lot to celebrate. But a lot of African people – especially young people – have their eyes set on the west, on the pop cultures of USA, Europe and so on. I think as Sauti za Busara what we do is celebrate the richness and diversity of what we have here in Africa.

STM: Sauti za Busara is not the first or only festival in Africa to have to cancel a year. Where to for culturally significant African music festivals?
YM: Because of this platform, many artists have been invited to tour other international festivals. People like Sarabi from Kenya, Tausi Women’s Taarab from Zanzibar, and Jagwa Music from Tanzania and many others have found Sauti za Busara to be a meaningful stepping-stone in their international careers and a springboard to the international arena. Often this leads to more springboards whereby they can make recordings of their music, get more and more invitations to perform, to get international distribution and so on. So then it becomes a full-time professional career for these musicians instead of, as with some musicians in this part of the world, driving taxis or selling tomatoes by day so that they can keep their music alive as a hobby.

S-TM: Do you think that Sauti za Busara has run its course and done all it could do?
YM: In 2014, February was the highest month for [service] providers in Zanzibar – 40 000 people came to the island. When we first started the festival that number was 3 500 or something like that. So what used to be the lowest month is the highest month.  Even conservative estimates say since 2004 the festival generated US$70 000 000 in revenues for Zanzibar. More importantly, there is a huge need for developing skills. So we’ve had artistic and technical seminars and I think those are really important to strengthen the infrastructure in a way.

STM: What is the game plan for getting Sauti za Busara 2017 ready?
YM: For 2017, we’ve been having a lot of meetings with government, business leaders, embassies, representatives and international donors. Everyone agrees that Sauti za Busra is incredibly important – it’s still valued and relevant. It’s still very popular with local and international audiences and that Sauti za Busara needs to continue. As it’s been for the last twelve years, partly because we’re a non-profit, our challenge has been to raise money every year, and then account for those monies within the months after the festival. Once we hand in our reports, every single shilling or penny or cent that comes in has gone out and been spent – we’re back to zero and start looking for funding for the next festival.

I think this is what we’ve learnt finally is that this is not sustainable as a model. What we’re doing now is saying we want to build partnerships which are mutually beneficial. But these partnerships need to be for five years, ten years – at least three years. We have to have a balance of income which is coming from international donors, commercial beneficiaries – particularly hotels and airlines. So one of the key priorities for next year, which we’ve started already, is to build long-term partnerships with a variety of sponsors.

Shekhinah is coming up roses

A beginner’s guide to boutique festivals

Can a Tiger Tiger change its racist stripes?