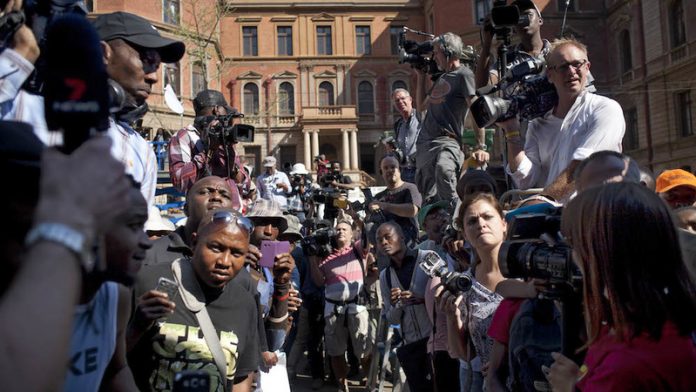 An early ombud on the New York World discovered an oddity about reports of shipwrecks in the paper: there was invariably a ship’s cat that was rescued.

Isaac D White, who was formally titled the director of the Bureau of Accuracy and Fair Play, called in the maritime reporter, and asked him about it. Surely, there couldn’t always be a rescued cat?

According to Cassandra Tate, writing in the Columbia Journalism Review, the reporter responded: “One of those wrecked ships had a cat, and the crew went back to save it. I made the cat the feature of my story, while the other reporters failed to mention the cat, and were called down by their city editors for being beaten. The next time there was a shipwreck, there was no cat but the other reporters did not wish to take chances, and put the cat in. I wrote the report, leaving out the cat, and then I was severely chided for being beaten. Now when there is a shipwreck all of us always put in a cat.”

This was about a century ago, soon after publisher Ralph Pulitzer, son of the more famous Joseph, established the bureau to deal with any blurring between “that which is true and that which is false” on his paper.

In one way, journalism has clearly moved on: it is unlikely today that a ship’s cat would be invented into a story in this way. But there are plenty of newer problems that need watching.

I used the anecdote in my first column as ombud for the Mail & Guardian, published in late 2004. It seems appropriate to return to it for my last column. Times are tough, the newspaper is having to cut costs, and this office is being closed.

When then-editor Ferial Haffajee asked me to become ombud, we agreed a broad mandate: to deal with reader complaints, to write a monthly column and to “identify trends and issues in the M&G‘s journalism, or in broader journalism affecting the paper”, and bring them to the fore through this column or in other ways.

It’s been a fascinating run, as first Nic Dawes and then Chris Roper and Angela Quintal extended the arrangement. Over the past 11 years, I have dealt with an enormous range of issues, from crossword puzzles to whether San or Bushmen is the correct term, from Zapiro cartoons to gender politics and, of course, major political stories and investigations.

There has sometimes been criticism that it is not possible to take an independent view if you’re appointed by the newspaper itself, even if you’re part-time and stay outside the paper’s editorial processes. But that misses the point. An office of this kind is not the only way in which journalists can be held to account: there is the South African Press Council, which adjudicates complaints, there are legal avenues such as a defamation suit for people who are aggrieved, and the law imposes limits in various areas. And then there are readers, who can be vociferous if they believe a newspaper has behaved badly.

Appointing an ombud, whose job it is essentially to be critical, just creates an additional level. It strengthens the paper by regularly, systematically interrogating the quality of its journalism.

Then, and now, the paper has been among a small club of media that have such an office. When members of the international Organisation of News Ombudsmen met in Cape Town earlier this year, we all fitted into a medium-sized conference room. One of the great privileges of playing this role has been to be able to stay in touch with some very smart people in other countries, grappling with complex issues facing journalism.

In that first column, I said I would call it as I see it, and I hope I have stuck to that. My opinions have not always been popular at the M&G, and there have been robust exchanges. One of the earliest lines I had to draw was that my column could not be edited if it is to be credible. To many journalists, that may seem like a luxury – in fact, it means I have to shoulder full responsibility for what appears.

When I thought a remedy was necessary, whether it was an apology, a retraction or a right of reply, the paper complied.

One of the broader trends I have dealt with time and again has been the push from some quarters, particularly in the ANC, for tighter regulation of the media. Right now, the debate has erupted anew, and the ANC’s upcoming policy conference will yet again be debating the desirability of introducing a statutory media appeals tribunal.

It’s not as if the media are perfect. Besides particular stories that may go wrong, there are systemic issues that continue to leave some voices marginalised, and sometimes we fail to be rigorous enough in questioning our own assumptions.

I’m all in favour of subjecting journalism to close scrutiny and debate, but tighter control is a different matter. There is a different agenda here, a political drive to exert control over the narratives available to the country’s citizens.

In a democracy, the public interest is best served by shining a light into dark places.

The M&G has played an important role in investigating and exposing important stories that have enriched the public discourse, and I’m grateful for having had the opportunity to play some role in this enterprise.

I hope somebody else will keep an eye on any fictional ship’s cats that may pop up.

The M&G‘s ombud has provided an independent view of the paper’s journalism. If you have any complaints you would like addressed, please contact the editor

Despite the early difficulties between the tax ombud and the South African Revenue Service, the parties are now finding ways to resolve their problems
Read more
National

A fake blog post proposing that white men be stripped of their voting and property rights “might be landing a blow among many other blows”.
Read more
Education

Every varsity should have an ombud

Transformation in higher education is vital, but a neutral arbiter is required to ensure fairness.
Read more
Analysis

Public sentiment is a poor gauge of the need for balance

Ombudsman: Reason can demand use of shocking images

If publishing a shocking image can do something to cut through the smugness, then it is worth some offence and discomfort.
Read more
Analysis

The newspaper erred in turning a suggestion made at an ANC workshop into a party decision.
Read more
Advertising
Continue to the category
Opinion