Greed and poverty in the wake of Biko 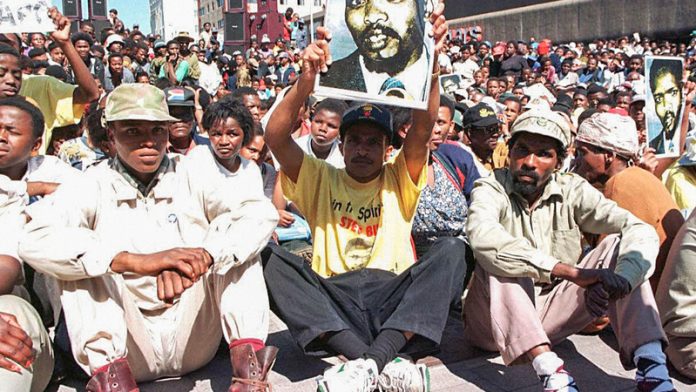 The period of reflection on the life of Steve Biko puts those who cherish his legacy in a precarious position. Many of us have resorted to throwing Biko’s legacy into the dustbin of history, and many of those who are privileged to possess the authority to write history have reduced his legacy to the fringes of our collective national memory.

The true legacy of Biko cannot be obliterated from our national memory and neither can it be thrown out of the broader political discourse of postapartheid South Africa. In fact Biko’s legacy is more relevant to us than ever before.

At the core of Biko’s black consciousness message is the need for those affected by political oppression and economic exploitation to change their mental attitude so as to free themselves from all forms of subjugation.

Biko’s legacy speaks to all of us about what can be done to free the many South Africans from the shackles of poverty. Ours is the most unequal society in the world, according to the 2013 Global Wealth Report on global inequality. The seriousness of the inequality challenge is further reinforced by the assertion made in the report that two of the richest people in South Africa own the same as 50% of the population. Poverty and inequality have reduced most of the people to a state of economic exclusion and human degradation.

We need to articulate and act on the legacy of Biko such that it pricks our conscience and propels us to collective action aimed at drastically narrowing the gap between the extremely rich and the poor.

The warning to billionaires by United States presidential hopeful Bernie Sanders is relevant to the South African situation: “Your greed is destroying South Africa, and we are going to end your greed!”

This would be Biko’s message to the super-wealthy people of South Africa. Such a warning should not only be a veiled threat but should be accompanied by fierce contestation around what would be the best economic policies to liberate our people from the degradation of poverty.

Biko’s legacy directs all of us to review the deteriorating economic situation in our country, which has left many families without food on their tables. The decline of the mining industry, which was for years the backbone of our economy, has left many people faced with poverty. In spite of the recent agreement between them, looming retrenchments in the mining and steel industries will mean more people will become poor and more families will starve.

A five-year study by the University of Cape Town’s African food security unit network, conducted in 2013, revealed shocking information on the level of poverty and hunger in South Africa: namely, that more than 12-million South Africans go to bed hungry every night.

It further exposed a food crisis that constitutes a “death sentence” for many, and which the government has labelled “serious”.

The plight of the poor and hungry was highlighted in 2011 when four children, aged between two and nine, died in a farmer’s field as they began an 18km walk in search of their mother and food in Verdwaal, North West. It was later discovered they had not eaten for more than a week.

The Biko legacy compels us to seek answers to the question of how come, after 21 years of democracy, we still experience hunger and poverty at a scale that leaves all of us afraid?

Xolela Mangcu has proposed an alternative definition to Biko’s black consciousness. He argues that black consciousness should be seen as a historical experience, instead of a racial one. But, like all historical phenomena, historical experiences are a subject of interpretation. History has created a majority of black people who have poor education and lack the required skills in the market, and history is now creating a considerable number of white people who are beginning to experience a decline in their standard of living.

At the same time, history in South Africa has given rise to a growing black middle class and a small, super wealthy class – primarily the beneficiaries of a misguided black economic empowerment philosophy.

In such a situation, Biko would compel all stakeholders to put their shoulders to the wheel and steer the country towards a situation in which the economy would grow at double digits, industries would flourish, small business would grow and more people would get jobs.

Biko’s legacy would direct all stakeholders to grow the economy instead of letting some short-sighted politicians insist on taking over mines and banks.

The Biko legacy should not only redirect us towards seeking a balanced economy that provides ­security for both employers and workers; it should also renew our focus as a nation on the extremely complex issue of land restitution.

It is commonly accepted that South Africa’s “land reform” has moved slowly over the past 21 years. The ANC-led government has failed to come close to reaching its target of redistributing land. If it had chosen a sensible target rather than an absurd one, it would be able today to proclaim great success.

Biko’s legacy would require all of us to accelerate the redistribution of land, which will in the end help to lift the majority of people out of poverty.

In our quest to reconstruct the Biko legacy, we need to locate it in the harsh socioeconomic challenges of South Africa today.

Tutu Faleni is a Democratic Alliance member of the North West provincial legislature. The views expressed here are his own.