Boks must smell the roses, beat the Blossoms 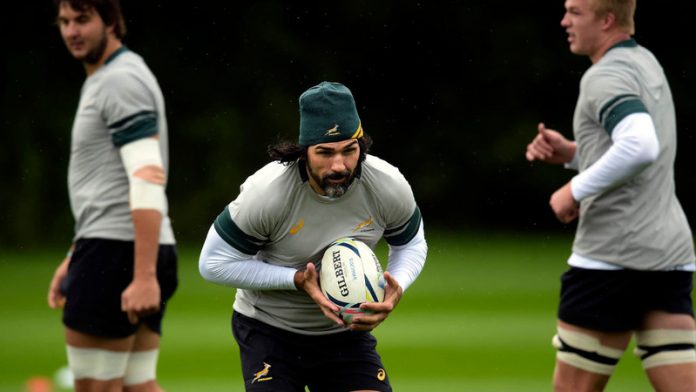 The Springboks have spent the first week of their World Cup campaign happily flying under the radar. They have been based in Eastbourne, for which there is just no South African equivalent. Imagine, perhaps, a quiet day in the suburbs of Pietermaritzburg, with high tea and scones, and you may be part of the way there.

Eastbourne and Brighton, the site of the Boks’ opening game against Japan, are the two largest towns in Sussex, a county that is to rugby what the Free State is to lacrosse. But it is one of the wealthiest parts of Britain, so they are playing the Brave Blossoms at a football venue – the Brighton Community Stadium – with the strategists of Rugby World Cup hoping that curiosity alone will help fill its 31 000 seats.

It looks like they will be disappointed, with sky-high ticket prices scaring off all but the most affluent and committed from many fixtures at this early stage.

It will be up to the players to ignore the subtext and start the tournament off on the right note. To that end, the return to the side of squad captain Jean de Villiers is important. De Villiers is only too aware that his stellar career has frequently stuttered on the biggest stage of all, as a result of untimely injury.

He said: “It’s the fourth World Cup that I’ve been selected for: I’ve been omitted from the squad, I’ve been brought into a squad after injury, I’ve been replaced after getting injured and I’ve been there from the start. I’ve been through it all and it’s a great story to tell.”

But will it be a story with a happy ending? As it happens, De Villiers is carrying an injury into the game, courtesy of the broken jaw he sustained in the Boks’ warm-up game against Argentina. Forced to wear a brace, he sports a lean and hunted look at odds with his usual demeanour. He explained: “It’s really frustrating not being able to eat. I’m probably the leanest I’ve ever been in terms of muscle mass to fat percentage and that makes it easier to run, but I’m still 96kg.”

Significantly, De Villiers will captain the side for the 36th time this Saturday, joining Gary Teichmann as the second-most experienced captain in Springbok history.Teichmann, of course, was cruelly omitted from the 1999 World Cup and never got to play in a tournament, having made his debut against Wales in the first match after the Boks’ successful 1995 campaign.

There is a perception that this Bok side is long in the tooth, but the squad’s average age is just 26. The team selected for the match against Japan, however, is easily the most experienced ever fielded by South Africa, with 880 caps, 44 more than the one that exited the 2011 tournament at the quarterfinal stage. De Villiers accounts for 107 of those caps, with Bryan Habana (110) and Victor Matfield (123) ahead of him.

One man who will probably not make the century mark that his talent deserves is the great Schalk Burger. The continued absence of Duane Vermeulen means that Burger gets to start at eighth man, the position he filled in his Test debut against Georgia at the 2003 tournament. The big man considers himself a far more nuanced player now than he was then.

“I started off at school and college as a cricket player. I was an eighthman for Maties [Stellenbosch University] and it was Jake White who turned me into a number six flank. Then in 2006 I got the neck injury and since then I’ve added a bit of subtlety and skill, not trying to win every collision, picking your moments.

“And then I had another ‘oopsie’ in 2011 and 2012, and you come back with a fresh perspective. I think you get to a certain age where you realise you’ve got a certain number of games left in you and you’ve got to make them count. I think I’m a better player for what I’ve gone through. What I lack in the physical aspects I think I’ve gained in wisdom and a skill set.”

The “oopsie” was viral meningitis, but the 2006 injury resulted in a spinal fusion operation and the effects of that are still with him. Burger had no feeling in his left hand for a long time after the operation, which was a problem because he is a talented guitarist, like his Springbok father.

And, he says: “It’s still a little bit dull in my left pinkie, but a lot of the feeling is back and the bar chord is no problem. In fact, with a couple of lagers it gets stronger and stronger and the feeling gets better. But the guitar playing is meant for late nights and close friends.”

It is to be hoped, then, that Rugby World Cup 2015 will provide plenty of opportunities for the guitar to come out, for an enduring fact of Springbok campaigns is a dour mentality that ignores the fact that these are special times.

The 1999 tournament was schizophrenic because of Teichmann’s omission, and 2003 was haunted by the ghost of Kamp Staaldraad. Jake White’s winning campaign of 2007 endured some fraught moments against Tonga and Fiji, and the class of 2011 never escaped the straitjacket of defending champions.

There is enough talent in this side to go all the way again, but they will have a far greater chance if they remember to stop and smell the flowers along the way.