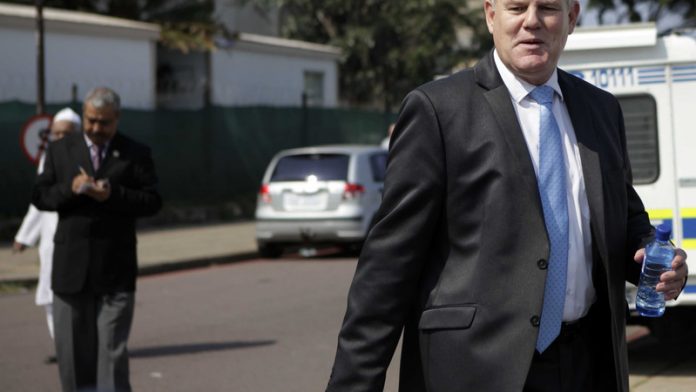 NEWS ANALYSIS
The dramatic re-suspension of KwaZulu-Natal Hawks head Johan Booysen represents the capstone of an extraordinary architecture of impunity being built on the ruins of the criminal justice system.

In one of his first official acts, Ntlemeza arrived at Booysen’s Durban office on Tuesday, accompanied by provincial commissioner Mmamonnye Ngobeni and heavily armed members of the police tactical response team.

Booysen was not there but has since been served with a suspension order based on what appear to be trumped-up charges premised on a seven-year-old typing error.

Booysen has been charged with fraudulent misrepresentation after being paid a small bonus for the work of his Cato Manor team in 2008 in tracking down the killers of taxi violence investigator Lieutenant Colonel Zethembe Chonco. The bonus motivation, which was neither written nor endorsed by Booysen, contained two errors where case numbers were incorrectly recorded by reflecting the month as “08” instead of “09”.

It is the fourth attempt to remove Booysen from office, but the career detective shows no signs of backing down and his lawyer, Carl van der Merwe, told amaBhungane that they were preparing an urgent application to challenge the suspension.

The desperate attempts to remove Booysen began following the December 2011 publication of photographs that purported to show that the Cato Manor serious and violent crime unit, which reported to Booysen, was acting as a “hit squad”.

But indications are that police crime intelligence itself played a role in leaking that information and that Booysen’s role in several politically sensitive investigations – as well as his political alliances in KwaZulu-Natal – were and remain the prime reasons for targeting him.

Cele vs No 1
Booysen is regarded as close to former police commissioner Bheki Cele, who is at the centre of an internal ANC battle for control of KwaZulu-Natal, the party’s biggest region and a crucial source of votes in the contest to replace President Jacob Zuma as party and national president.

Cele, who campaigned against Zuma’s re-election at Mangaung in December 2012, is part of the camp, which includes provincial premier Senzo Mchunu, that opposes the so-called “premier league”.

This faction comprises Free State premier Ace Magashule, Mpumalanga’s David Mabuza and North West’s Supra Mahumapelo. They appear to enjoy Zuma’s endorsement mainly, it is said, because they will protect him when he leaves office.

Zuma’s hold over the party is such that both factions are backing his ex-wife, Nkosazana Dlamini-Zuma, as the only presidential candidate that would be acceptable to Number One.

Cele’s popularity in KwaZulu-Natal is regarded as an obstacle for the premier league and a senior member of the Hawks told ama­Bhungane a criminal investigation of Cele is already in the pipeline. It is said to relate to his association with controversial Durban businessperson Timmie Marimuthu during Cele’s tenure as a provincial MEC.

In that case, Booysen’s continued presence as Hawks commander in the province might be construed as an obstacle.

Jiba
But Booysen was also a key player in cases that might represent a more direct threat to Zuma – and to key appointments in the criminal justice system that appear designed to guarantee the president a comfortable retirement, undisturbed by investigations of him or his family.

First, Booysen and the Cato Manor unit are intimately bound up with the criminal and civil cases against Nomgcobo Jiba, the head of prosecution services for the National Prosecuting Authority (NPA).

The basis of the criminal charges against Jiba flowed from allegations that she had lied under oath. She allegedly did this in papers prepared for the prosecution of Booysen and the Cato Manor team on charges under the Prevention of Organised Crime Act – and in a later affidavit presented to the Durban high court in an attempt to justify the charges, which Booysen had challenged.

Booysen contended it was clear that none of the evidence implicated him under the Act, which required Jiba, then acting national director of public prosecutions (NDPP), to apply her mind before approving the charges. Judge Trevor Gorven concurred, noting: “In response to Mr Booysen’s assertion of mendacity on her part, there is a deafening silence. In such circumstances, the court is entitled to draw an inference adverse to the NDPP.”

Former prosecutions head Mxolisi Nxasana arranged for perjury charges to be laid against Jiba and her trial was due to go ahead on August 19 when Nxasana’s successor, Shaun Abrahams, abruptly announced that she would no longer be prosecuted.

Now new questions have arisen about the basis for the withdrawal.

Abrahams has publicly confirmed that he asked for a briefing on the Jiba matter soon after his appointment, despite the fact that she had already been charged and appeared in court. Prosecutors Jan Ferreira and Gerhard van Eeden gave Abrahams a comprehensive presentation to substantiate their decision to prosecute Jiba. It appears Abrahams was not happy and asked them for a formal legal opinion.

Before they could deliver their opinion, he asked their immediate boss, advocate Marshall Mokgatlhe, “to provide me with his decision as the regional head of that office, accompanied by an opinion”.

Mokgatlhe found there were no reasonable prospects of a successful prosecution, but it is not clear on what basis or whether he has the power simply to impose his view over that of the assigned prosecutors.

The NPA has refused to disclose Mokgatlhe’s formal opinion, but legal watchdog Freedom under Law is considering applying for a judicial review of the decision.

The high court application brought by the General Council of the Bar to have Jiba struck off the roll of advocates is still proceeding, with a court date yet to be set.

Panday
According to a source familiar with the matter, another of Abrahams’s priority cases concerns politically connected Durban businessperson Thoshan Panday. The investigation into Panday, a sometime business associate of Zuma’s son Edward and the president’s cousin Deebo Mzobe, began on Booysen’s watch.

In 2010 Panday was probed for defrauding the police by overcharging massively on a contract to broker temporary police accommodation, allegedly with the connivance of a procurement officer, Colonel Navin Madhoe. In 2011 Panday and Madhoe were arrested in a sting operation for allegedly attempting to bribe Booysen to quash the investigation.

In 2013, the KwaZulu-Natal prosecutions boss Moipone Noko withdrew all charges against the pair without giving reasons.

It is understood that Panday had complained of a conspiracy against him and lodged a complaint regarding the illegal interception of his communications. He also alleged that police crime intelligence had attempted to pressure him into becoming a witness against provincial police commissioner Ngobeni. Panday has admitted to paying for a birthday party for Ngobeni’s husband.

In 2014, shortly before his suspension, former Hawks boss Anwa Dramat asked then prosecutions head Nxasana to review the withdrawal of charges against Panday.

So, too, did Independent Police Investigative Directorate (Ipid) head Robert McBride. McBride is understood to have told his lawyers he believes he was removed as Ipid director because of the Panday case.

Nxasana appointed high-profile prosecutor Gerrie Nel to review the withdrawal of charges against Panday. Following Abrahams’s appointment, it is understood he requested a briefing from Nel.

According to the same source, Nel provided a detailed written report recommending that Panday and others be charged. In August Beeld reported that Nel’s authority to prosecute outside Gauteng had been revoked.

Questioned about Nel’s recommendation on Panday – and about the controversial process followed to discontinue the Jiba prosecution – NPA spokesperson Luvuyo Mfaku said: “Kindly be advised that we are not prepared to comment on baseless and inaccurate information from faceless mischief-makers and information peddlers.” – Additional reporting by Sally Evans