An outsider’s bare act of defiance 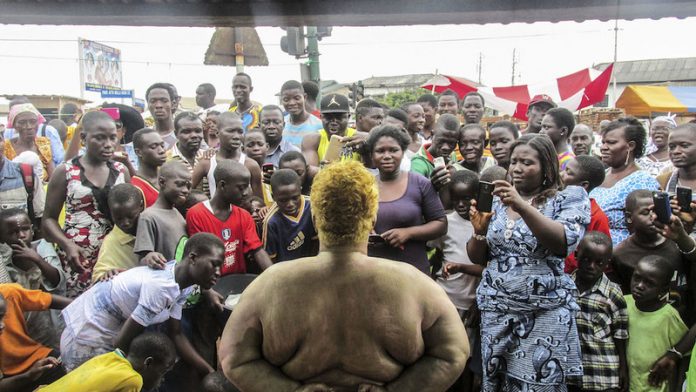 We all have this naked body under our clothes. It’s a basic variation on two broad themes and yet in so many ways it’s still the most radical thing there is: a real showstopper, and a taboo viewed more seriously than extreme acts of violence. Ask photojournalist-turned-artist Dean Hutton, whose exhibition The Cradle opened earlier this week.

When the 2008 xenophobic crisis in Johannesburg split the surface of society and spilled blood on the pavements, Hutton photographed it for newsdesks all over the world and became defined by these terrible and astonishing images.

“I shot for four to five days without a minute of sleep. I had a lot of post-traumatic stress after that,” says Hutton. “It forever changed my perception of the country. I don’t believe in patriotism. It’s just another fucking conceit about how to separate yourself from outsiders.”

Hutton speaks of not ever having had a personal sense of belonging. “I wasn’t a real part of my family. I wasn’t a part of the children I went to school with. I always identified myself as an outsider. Being a journalist taught me much more about a sense of community. Working collaboratively on art projects has taught me about being a human being engaged in relevant work.”

Today, Hutton emerges as a performance artist. The ineffable and mesmerising beauty of the persona Goldendean smashes boundaries. By no means does Hutton’s naked body fit fashionable Western standards of physical beauty. It’s patently female. It’s not toned or primped. It’s painted gold. And when you’re in the experience, you are cowed by the unutterable beauty of it. It is like being in the presence of a god.

Mircea Eliade, in his ground-breaking 1957 text The Sacred and the Profane, writes about the concatenation of the human body with an understanding of the natural elements of the world, as a sacred entity in religion’s history. Looking at Hutton’s work – and the art-related gestures of other performance artists such as Steven Cohen – there’s a curious mix of the imperative of the shock effect in contemporary art with the deep resonance of these very roots that underpin the body as sacred, and honour it as such.

Goldendean brings you to a point of emotional stillness. You want to weep, not out of empathy for the person’s vulnerability or nakedness, but for your own sense of place in the world.

“Two years ago, I made the decision to become ‘Dean’,” Hutton told the Mail & Guardian. “I was not happy with the name given to me when I was born. It doesn’t fit me. I wanted a name to fit my gender. I am genderqueer, beyond the binaries of male or female. I’ve never particularly felt like a woman. When I was a kid, until the terrible rude awakening of puberty, I considered myself more a boy than a girl and yet I don’t feel comfortable trying to claim male privilege. I don’t belong in the binary.

“It’s a world in which it is comfortable to do that now. There have been others that have come before me. They give a language to what I have felt my entire life.”

In saying this, Hutton references the work of fellow South African Cohen who, some 20 years ago, was denounced by media professionals almost hysterical with laughter. His work developed from silkscreening in the 1980s to performance art in a corruption of drag, but many people just saw great tracts of exposed skin or his genitals and shrilly deemed Cohen shamefully naked.

Could laughter in this context be deemed the laughter of embarrassment? Is it the laughter society has generated to cover the foisted reflection on the self that nakedness presents? And why should nakedness be shameful? Anthropologist Mary Douglas comments in Purity and Danger (1966) that any taboo articulated by society comes from a sense of complicity held by that society.

Last July, an anonymous young woman made a curiously public and private gesture to the statue of Nelson Mandela in Sandton. She stripped naked, conducted what looked to outsiders like a personal ritual, got dressed and left. People filmed this. Some laughed uproariously. It went viral on social media. But it channelled a level of mystery that discomfited many.

“People can build themselves outside of the strictures of tradition, religion, race,” says Hutton.

Cohen is white, middle-aged, homosexual and Jewish: an outsider, like Hutton. A catalyst that made him realise the need to make art was a forced confrontation with his maleness: his compulsory conscription in South Africa’s army in the 1980s.

“It’s important to know not where you fit in the world, but where you don’t fit,” adds Hutton.

The Cradle, created by Dean Hutton with Alberta Whittle, Anna Lorenzen and Hutton’s dogs, is on at GoetheonMain in Maboneng, Johannesburg, until October 25