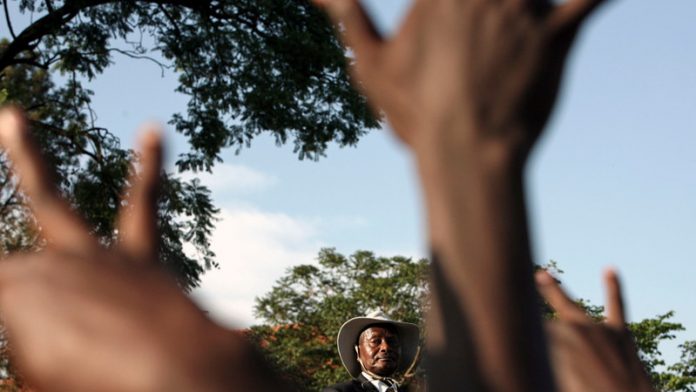 It is one of the most memorable images of contemporary Uganda – a weather-beaten 42-year-old Yoweri Museveni, sandwiched between equally rugged warriors of the National Resistance Army (NRA), takes oath of presidency before delivering his now famous “fundamental change” speech.

On that day, January 29 1986, on the steps of Parliament in Kampala, Museveni tore into the previous regimes, denigrating the ex-presidents as “political quacks” and “criminals” who had pushed the country to the edge of a precipice.

He promised that the NRA’s ascent to power was not “a mere change of guard but a fundamental change”.

Earlier that month, Museveni’s rebels had made history, fighting their way to power to become Africa’s first guerrilla outfit to unseat a sitting government, a feat that would inspire remnants of the movement to try a similar coup in neighbouring Rwanda and succeed.

Teeming with confidence and assured of local and domestic goodwill, Museveni sought to diagnose a single cause for the continent’s teething problems. In his book, What Is Africa’s Problem?, he succinctly answers his own question, proclaiming that “Africa’s problem is not the people but leaders who overstay in power”.

Ugandans go to the ballot in February next year to decide whether Africa’s fifth-longest-serving president should get a fifth five-year term.

It will not be lost on them that the 71-year-old has since scrapped presidential term limits and has cracked down on the opposition, enabling him to survive despite disputed elections.

Next year, he will have headed the ruling party, now called the National Resistance Movement (NRM), and been in office for 30 years, the first nine of which he ruled without elections.

Though his harsh attacks on ex-leaders upset conservative Ugandans in 1986, it struck a chord with many in a country that had reached the brink of an abyss. Security services were butchering civilians, the economy had ground to a halt and basic services had rotted away.

This is the history that ruling party apparatchiks are quick to remind Ugandans of when an election beckons, harking back to the days when people vanished into dungeons and warning that it’s not too long ago to revert to that ugly past.

This siege mentality works wonders – opinion polls, though not infallible, often indicate that Museveni remains the favourite. He is viewed as a strongman who is needed to keep the security brigade in check, and probably with good reason.

A post-Museveni Uganda sliding back into anarchy “is not a far-fetched possibility”, says Moses Khisa, a PhD political science candidate at Northwestern University in Illinois, United States.

“He [Museveni] has set up the country in such a way that many feel that, without him, there’s likely to be breakdown of order,” Khisa wrote in an email interview with the Mail & Guardian. “It’s very likely because Museveni has so personalised the state that, in his absence, we could easily have fragmentation as different power centres struggle for supremacy and dominance.”

Africa is replete with liberation movements-cum-ruling parties, which are quick to remind the citizenry that they are the glue that holds the country together and, without them, all hell will break loose.

Zanu-PF reminds Zimbabweans of the independence struggle. The ANC becomes nostalgic over the anti-apartheid struggle. The Rwanda Patriotic Front stresses how it stopped the 1994 genocide. But rights groups accuse the government of riding on the genocide fear to crack down on the opposition.

Throw in the Ethiopian People’s Revolutionary Democratic Front, the People’s Front for Democracy and Justice in Eritrea, Frelimo in Mozambique and the MPLA of Angola and you have a mix of military-political movements that have kept their countries stuck in a rut.

Although Ugandans might believe Museveni has overstayed his welcome, a disjointed opposition has not helped matters, putting desperate voters between a rock (the regime)and a hard place (the opposition).

Opposition parties, already crippled by funding constraints and thin on the ground, remain mired in internal disputes, which makes them easy fodder for a regime that either cracks the whip or dangles the carrot.

Formed in 2004, the Forum for Democratic Change (FDC) is Uganda’s biggest opposition party and its majority is made up of elements from the NRM. But the FDC prefers to preach to the converted in urban centres instead of taking its message to the ruling party’s strongholds in the countryside.

In the last elections, in 2011, the FDC failed to field candidates in critical parliamentary and district council elections in rural constituencies, in effect abandoning them to the NRM, which now commands an important majority.

With individual parties unable to challenge the ruling party, which is bolstered by state resources and propped up by security agencies, attempts by the opposition to field a joint presidential candidate have all been stillborn.

Paul Ssemogerere’s Inter-Political Forces Co-operation alliance for the 1996 elections was frail. The Inter-Party Co-operation failed to attract big parties in the 2011 polls.

The latest attempts to find a joint candidate – for next year’s election under the banner of the Democratic Alliance – fell flat last month. Yet, with former prime minister Amama Mbabazi, the ruling regime’s Mr Fix-It for years, joining the presidential race alongside opposition strongman Colonel Kizza Besigye, Museveni will have his work cut out to achieve the 50% legal minimum required to win the presidential vote.

Suave and tech-savvy, the powerful deposed secretary general of the ruling party announced his presidential bid on YouTube, drawing the first blood in the battle to bag the crucial youth vote.

In the last election, Museveni recorded a rap song to charm the youth and he has tried to regain the initiative by appointing younger people to run the ruling party’s secretariat.

With youth unemployment soaring to 80%, and with 42% of the 15-million registered voters being between the ages of 18 and 30, the youth vote will be critical.

The opposition hopes the entry of Mbabazi, who is thought to have the ear of foreign powers such as the United States and China, might convince Ugandans who have been voting with their feet to now embrace the ballot.

In the 2011, 5.6-million registered voters did not vote‚ more than the 5.4-million voters who gave Museveni victory.

But Museveni has not played his cards badly. As the de facto leader of a quartet of African presidents former US president Bill Clinton referred to as a “new breed of African leaders” in 1998, he ­spearheaded an anti-Aids campaign that saw Uganda’s prevalence rates plummet from 18% in the 1990s to an all-time low of 6%, and at a time when the disease was a taboo subject.

His willingness to play policeman in a volatile region by sending troops to Somalia, where the US had tried and failed, and to South Sudan, where genocide appeared to be imminent, also earned him friends in the West.

But the plaudits Museveni won in his early years diminished when he resorted to violence in 2001 after Besigye, Museveni’s doctor during the bush war, accused him of betraying the ideals of the movement and challenged him for the top job.

Fourteen years later, a parliamentary committee report into the violence that plagued the election has yet to be debated because the government, with a majority in the House, is uncomfortable with some of the recommendations.

The Supreme Court has twice ruled that his election victories – in 2001 and 2006 – were helped by “gross irregularities”, although the judges differed over whether the irregularities substantially affected the results.

But the straw that broke the camel’s back, even among some of Museveni’s staunchest supporters, was the removal of term limits in 2005 to allow himself countless shots at the presidency.

When the ballots are counted in February, whichever way the vote goes, it will mark a watershed. Museveni has now been abandoned by most of his bush war compatriots and his legacy is being increasingly soiled by his long rule.

He will be ineligible to run for office in 2021 because the maximum age of a president is 75. His eligibility even to stand for next year’s elections on the grounds that he will be more than 75 by the time his term runs out has yet to be decided.

Solomon Arinaitwe is a political reporter with the Ugandan Daily Monitor and is currently with the Mail & Guardian as a David Astor fellow.