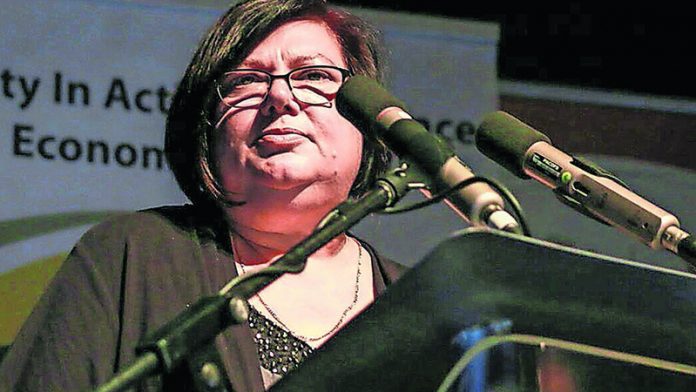 Reporting back at the inaugural Free State Global Investors Trade Bridge, MEC Elzabe Rockman said the Provincial Treasury has redefined its approach and support to its local government sector, with increased monitoring and support in respect of financial management and accountability to ensure the financial resources, assets and liabilities of provincial departments and municipalities are managed efficiently and effectively to ensure optimal service delivery.

“The scope of our task is illustrated by the fact that the provincial budget has consistently shown slower year-on-year growth than the inflation rate since [advent of] the 2009 Medium Term Expenditure Framework,” said Rockman.

“Given the dynamics of the national and provincial economy in the global economic slowdown, the Provincial Treasury responded well and increased the estimated revenue of the Free State by 6.7% between the 2009/10 and 2014/15 financial years.

She said the Provincial Treasury established and continues to lead an intergovernmental debt steering committee, which has achieved a drastic reduction in government debt owed to municipalities — by 56% — between June 2011 and August 2015.

“We also established proactive and practical relationships with institutions such as the National Energy Regulator of South Africa and the South African Revenue Services to ensure continued capacity building and enhancing compliance with laws and regulations, as well as reducing the reliance on consultants in the local government sector,” she said.

“Provincial Treasury is at the forefront of the fight against fraud and corruption in the Free State in both the public and private sector and we have established partnerships with the Association of Certified Fraud Examiners, PWC, Standard Bank and the Public Service Commission to facilitate the annual Fraud Awareness Week, and have extended our initiatives to include regular information and education sessions throughout all districts of the province.

“The department has also initiated a programme of conducting headcounts in all provincial departments to ensure that we eliminate the possibility of paying ghost workers and [to] ensure the integrity of our payroll systems.”

Two significant initiatives led by the treasury to review the supply chain environment of the provincial and local government are its Supply Chain Management Toolkit and the enhancement of its central supplier database system. It has also implemented a number of transversal contracts to capitalise on economies of scale and ensure value for money.

“Through these initiatives, we ensure that we support stated government objectives, including SMME and co-operative development, as well as women and youth economic empowerment,” said Rockman.

“We introduced a Revenue Enhancement Allocation programme aimed at investing in projects that have potential to yield revenue for the province. Over the past three years Provincial Treasury has allocated R64-million towards revenue enhancement projects, including case management in health, revamping of the dairy enterprise at Glen and the revolving restaurant, fencing of reserves and maintenance of resorts, establishing a liquor database for the Free State Grambling and Liquor Authority and renovation of houses for health workers and doctors.”

The need for economic intelligence led to the treasury producing 21 research papers from 2009, ranging from a study into the funding adequacy in Free State education to an empirical survey and assessment of the impact of infrastructure investments on the Free State economy.

“Over the past few years we have also successfully implemented an internship programme for approximately 106 learners, and approximately 88% of the interns and experiential learners who have completed the programme have been appointed to permanent positions in either the national, provincial or local government or the private sector.

“One of our newest initiatives is a savings campaign that we have recently started with our provincial banker, Standard Bank, focusing on encouraging public servants to establish and promote a personal culture of savings. The campaign has kicked off with three provincial departments and four municipalities and we expect to grow it significantly over future years,” concluded Rockman.

The Free State’s Global Investors Trade Bridge has proved a profound way to strengthen international partnerships through investment in these and many other projects in the province.

Delegates from 26 countries attended the briefings and networking sessions; some were also exhibitors at the expo. The trade bridge did not just start and end with the three programme days. Further networking included meetings, excursions, factory and company visits and optional business trips to different parts of the Free State.

A top priority was to facilitate the effective implementation of the various agreements and MOUs already signed between the Free State Province and various countries to unlock trade and investment opportunities, forge new relationships and form business linkages with key players and decision-makers in various sectors.

Dignitaries attending the trade bridge included international ambassadors and high commissioners, as well as leading business players, MECs and mayors from across the province.

Prior to the event, out of the relations with 26 countries, 33 agreements have been successfully outlined.

Sam Mashinini, MEC for Economic Development, Small Business and Environmental Affairs, in closing the event commended Premier Ace Magashule, saying that his efforts and foresight of the dynamics at play made it possible for the Free State to “stand tall, as we equally extend our gratitude to our guests, both international and local South African delegates”.

“The value of this very first trade bridge reflects the overpowering interest by the provincial government in the future of our provincial economy and the intended influence through international business partnerships.

“Similarly, a concerted effort is provided by the provincial government to ensure that our local businesses find space to infiltrate and participate in the global market system, a market that was brought to our Free State SMMEs under a single roof for three consecutive days.

“This inaugural event is a summit which reflects the momentum that the Free State provincial government has been building to facilitate local and international business interaction this year through various missions.

“The success from this event has been the active and increased participation in this event by our SMMEs and we have hosted 120 exhibitors in the Arts and Crafts market as well as an additional 300 exhibitors from various sectors.

“From the electronic match-making registration lines, 120 match-making calls were achieved, 44 meetings took place during the two days, and partnerships have been formed across various sectors. The attendance of business people was more than anticipated, with more than 1 200 delegates per day,” said the MEC.

“Our concluding objective will be to follow up on these 44 meetings to ascertain whether we are able to support any partnerships in the future and outline them in our programmes for radical economic transformation.

“We are in a position already to announce that Russia is ready to partner with us on further exploration of investment opportunities in agro-processing and an educational exchange programme. Germany is ready to work with us on [a] mining revitalisation programme in Matjhabeng, while our intention to upscale co-operatives has also received a major boost and buy-in from India and Spain, [who] will also come on board in terms of renewable energy, tourism and agro-processing investments.

“We have already been invited to the 2016 Renewable Energy Summit, which Spain will be hosting.

“Moving forward, the Free State province’s commitment to grow the economy and to create employment for our clientele — the people of this province — remains unflinching. We look forward to sustaining every single agreement which accrued from this event,” concluded Mashinini.

Omar Essack leaves the 702 and 94.7 owners after a protracted standoff with the board
Read more
Advertisting
Continue to the category
Analysis