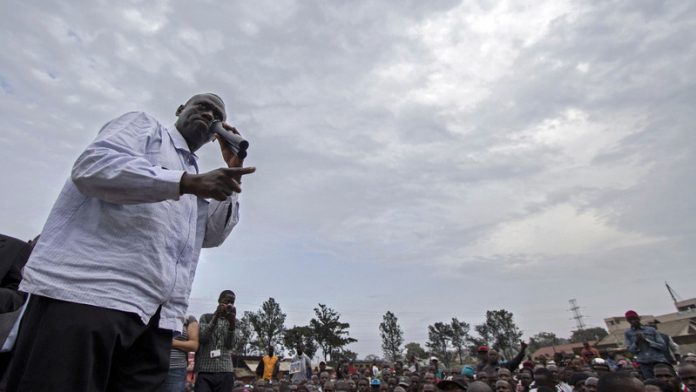 In separate reports on Ugandan television, Major Kakooza Mutale, perceived to be President Yoweri Museveni’s most lethal hatchet man, has lifted the lid on what many in the government’s top echelons have kept a tightly guarded secret: militia groups will be the driving force in next year’s election.

In one interview, cutaway visuals show the major addressing rows of bare-chested, club-wielding youths, commanding them to brace themselves to “force out of the way” anyone opposed to a fifth term for Museveni come February next year.

“Those who fear us should fear us more,” Mutale rumbles in a local dialect. “We are coming. Give us space and we get a way for [Museveni]. If you get out of the way and he passes, we shall not attack you.”

The video sent shock waves through a country that remains on the edge, having never witnessed a blood-free transfer of power in its 53 years of independence.

In other footage, located in what looks like a rebel camp, Mutale frenzies up young people with quasi-military music in Luwero, some 90km from the capital Kampala.

The choice of Luwero is instructive: it was the epicentre of the five-year Bush War that ushered Museveni into power. Such club-brandishing assemblies evoke ugly memories as they were the tools of trade ahead of the 1994 Rwanda genocide and happen often among nomadic, pastoralist societies in central and western Uganda, Museveni’s strongholds.

The youths respond to Mutale’s colourful monologue with wry smiles, perhaps alive to the stakes lying ahead: a possible matter of life and death.

Opposition politicians vowed not to take it lying down and are already training their own vigilante groups – ostensibly to “protect their vote”.

Mutale, a hitherto shadowy figure, first came into the limelight in 2001 when Museveni, shorn of the honeymoon that greeted his 1996 election, was on the back foot in the wake of a challenge from opposition politician Kizza Besigye.

Mutale formed the Kalangala Action Plan (KAP), a paramilitary group that traversed every nook and cranny of Uganda, cracking down on Besigye’s supporters.

Most affidavits sworn against Museveni’s 2001 victory implicated KAP, working in tandem with the army, in acts of election violence ranging from torture to murder.

To prop up Mutale’s group, in 2014 the police exploited a murder at Makerere University to fire up a hitherto dormant programme training young men into units of “crime preventers”.

With Makerere University having the biggest concentration of young adults in the country and being regarded as an opposition bastion, Ugandan police head General Kale Kayihura’s moves naturally raised suspicion that the programme was an attempt to eat into the youth vote.

the triumph with a clampdown on opposition protests, the misgivings are valid.

Leaked recordings of the police chief mobilising for the government ahead of the polls have not helped his case.

But Kayihura’s idea of mobilising young people into vigilante groups is not alien in African elections. In Zimbabwe, the ruling Zanu-PF runs a youth group – the “Green Bombers” – under the National Youth Service programme, ostensibly to equip them with “life skills”.

But the Green Bombers were at the centre of the 2008 election violence that forced opposition leader Morgan Tsvangirai to pull out of a presidential run-off, having defeated President Robert Mugabe in the first round. Nongovernmental organisation Human Rights Watch estimates that more than 200 people had been killed by then.

Though the Ugandan government will not admit taking its cue from Zimbabwe, the tactics being employed by Kayihura’s National Youth Crime Preventers Forum have parallels with the Zimbabwe model.

With such numbers, the government kills two birds with one stone: it shores up its numbers at the ballot box as the recruits are screened to ensure unwavering loyalty to the regime, while also propping up the force in whipping into order anyone who thinks otherwise.

The Uganda Human Rights Commission, the official government rights watchdog, took the police to task over the recruitment of so-called crime preventers, warning in a report that they are “poorly trained, yet given powers to do police work”.

Opposition parties have voiced concerns about the government using these youthful recruits to clamp down on legitimate antigovernment political work – even as the police leadership has ducked questions on the structure of the “crime preventers”.

And these concerns are plausible, according to Maria Burnett, a senior researcher in the Africa division at the New-York-based Human Rights Watch, who wrote in an email interview with the Mail & Guardian that “there are worrying signs already that police, with tear gas and rubber bullets, prevent people from even listening to opposition candidates.

“Police and ‘crime preventers’ should not crush the space for the opposition to share their views with citizens. We [Human Rights Watch] are very concerned about the state’s reliance on crime preventers,” Burnett wrote.

“Who they are, what training they receive, if they will be paid and/or armed, and how their command is structured are critical questions that remain largely unanswered.”

Burnett’s concerns lend credence to the latest poll by Research World International that indicated that 49% of Ugandans do not trust the police to act as a neutral arbiter during next year’s election.

But Museveni, alive to tempers quietly flaring, is putting on a bullish face, vowing that the violence that Ugandans have witnessed in some recent African elections “cannot” pan out in his country.

“Somebody said people are very worried,” Museveni said at a public prayer session. “Worried about what – elections? What happened in Kenya [in 2008] cannot happen here.

“I can tell you this: anybody who tries to do that will be smashed completely. He will not even remain with a trace. You kill people. We smash you there and then.”

In the last elections in 2011, Museveni poured in money to effectively buy his victory, calming a storm that flared just after the poll as the economy went into a downward spiral, with year-on-year inflation rocketing from 6% to 11%.

The opposition mobilised to stage protests against the rising cost of living, inviting a brutal crackdown from police that left scores dead.

As Museveni was being sworn in at a lavish $1.3-million ceremony, security services were battling supporters of Besigye who had thronged the route from the airport to welcome him back from a trip to receive medical attention in Kenya – undertaken after he was shot and nearly blinded by a rogue officer during a demonstration.

With a blend of daredevil youths, a polarised population, trigger-happy security agencies-cum-regime- enforcers, an obstinate opposition and an unyielding Museveni hell-bent on extending his 30-year stranglehold on power, next year’s Ugandan contest provides perfect fodder for everything that can go wrong in an African election.

Sub-Saharan Africa is rife with pro-government militias, often recruited from the ranks of disillusioned young people who can turn the tide of an election in the favour of incumbents.

The Mungiki ethnic militia in Kenya, which the International Criminal Court says was trained and armed by President Uhuru Kenyatta when he was still a minister, was at the heart of some of most barbaric acts of violence during the country’s 2008 elections. More than 1 100 lives were lost and thousands of people were displaced before a unity government was agreed on. The militia fought on the side of then-president Mwai Kibaki against the opposition’s Raila Odinga.

In Burundi, the Imbonerakure (“those who see far”), the ruling party’s youth wing, were accused of orchestrating July’s election violence, which forced the opposition to withdraw from the race. It left President Pierre Nkurunziza with an easy ride.

A bid to hold an election in the Central African Republic has collapsed because of violence fuelled by rival militias – one of which, the Anti-balaka (loosely translated as “anti-machete”), was originally formed by the government of ex-president Francois Bozizé.

In the West African state of Guinea, violence before the country’s second democratic presidential election since independence in 1958 had claimed three lives by polling day on Sunday, according to a BBC report.

Rwanda, still reeling from the 1994 genocide, remains in a fluid state before the 2017 elections, in which President Paul Kagame will be seeking a controversial third seven-year term. The elections of 2010 were preceded by violence, which peaked with the beheading of an opposition leader.

Solomon Arinaitwe is a political reporter at Uganda’s Daily Monitor. He is currently with the M&G as a David Astor fellow.