The opportunism of political selfies 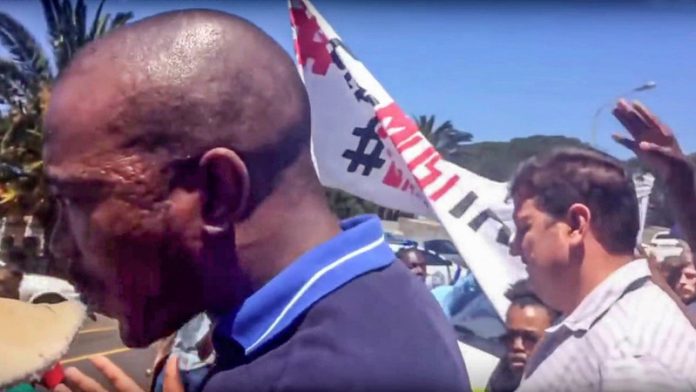 Hamba! Asimfuni! Go! We don’t want him! Democratic Alliance leader Mmusi Maimane was not expecting that reaction when he arrived on Tuesday at the University of Cape Town’s campus to talk to protesting students. He was told to get lost. Immediately. The moment was captured and beamed on to social media by dozens of phones.

Ah, Mr Maimane. Welcome. Have a seat, we’ve been expecting you. It is a time-honoured tradition that one’s initiation into the pantheon of Serious Politics must be the humiliation of an awful, fumbling attempt to take someone else’s glory and claim it as your own.

It’s a mistake the DA has made before. A stranger to South Africa reading the blue party’s recent literature would be surprised to learn that Nelson Mandela was not in fact ever a member of the DA. But perhaps the party’s most amusing act of co-option was the claim by MP Ian Ollis this month that “I got into trouble in high school for personally insulting PW Botha for his evil policies. I would repeat it.” Robben Island Prisoner 466/64 would be proud.

Our official opposition isn’t alone in the political opportunism game.

Famed South African athlete Caster Semenya once promised to have a glorious running career. The nasty comments about her suitability to take part in women’s events were bad enough. Much worse, however, was the explosion of pantomimic rage from a cast of politicians and functionaries who had never won so much as a wooden medal.

First there was then ANC Youth League president Julius Malema’s scholarly interpretation of Pedi gender phrasing, followed by the bluster of then president of Athletics South Africa Leonard Chuene. “Caster, WE are very very PROUD,” he yelled.

The incident proved to be a taste of things to come for Malema when he became the commander-in-chief of the Economic Freedom Fighters. Burn a tyre, and the red brigade would show up. There he was in Marikana, South Deep, Aurora and so many other sites of working-class discontent: colourful, outraged – but never permanent.

There are even subtler forms of political opportunism. Every year our ruling party rediscovers its piety and tours the church circuit to garner support. President Jacob Zuma is most adept at borrowing religious lingo to punt his political interest.

“Believe in two things: God and the ANC,” he’ll say, grinning. Or the infamous: “The ANC will rule South Africa until Jesus comes back”, and of course that priceless quote that compared voting for opposition parties with voting for the devil.

Political opportunism has a long history in South Africa. The apartheid government was adept at manipulating an international community obsessed with the looming threat of communism. Former prime minister Hendrik Verwoerd would issue warnings about the rise of the “rooi gevaar”: the red danger of communism lurking on the borders of South Africa to justify his regime’s abhorrent policies.

Verwoerd and his ilk were eventually swept away and our society is again facing a revolutionary energy in its street. But what is its soundtrack? Social change has so often had a grand musical accompaniment: local artists speaking directly to and for the agitators of change. Jean-Michel Basquiat. Plan B’s Ill Manors in the wake of the 2011 London riots. South Africa’s own rich heritage of artistic struggle. We’ve yet to find this sort of artist at the student protests – and the movement won’t be co-opted by opportunists like the consumerist rapper AKA, who had to be told by students at Wits, in their pointed way, that their struggle wasn’t a backdrop for celebrity selfie moments.

If Maimane had thought to ask the consumerist rapper before venturing out, he’d have known not to bother.