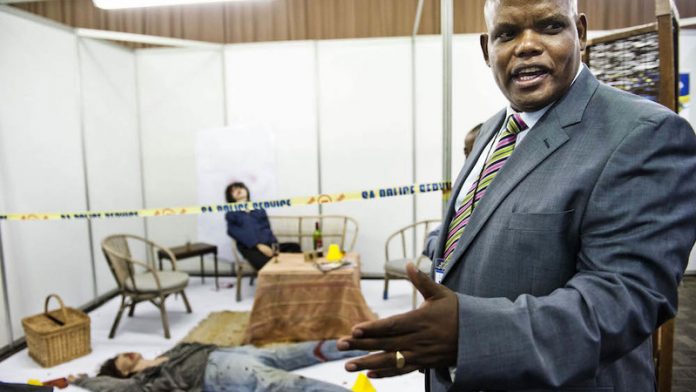 A source with clear access to the internal workings of the South African Police Service has claimed that Phahlane was closely involved in a covert 250-post appointment process conducted in crime intelligence in 2009 and 2010.

Mdluli’s ex-wife, his daughter, his son and his then-girlfriend – now his wife – were all appointed during the covert post process, and both Mdluli’s ex and current wife were promoted to the rank of colonel about  two months later, in March 2010.

Phahlane, a divisional commissioner and the head of police personnel services at the time, is alleged to have been responsible for approving and signing off their appointments.

Police spokesperson Hangwani Mulaudzi said this week in response to the allegations: “The SAPS is not a one-man show wherein one individual is responsible for the appointment and promotion of people. Lieutenant General Phahlane did not and still does not employ or promote people. “We are well aware that all these baseless and manufactured allegations are aimed at frustrating the leadership of the SAPS, as well as unsettling the newly appointed acting national commissioner.”

Phahlane was  installed as acting commissioner immediately after President Jacob Zuma announced the suspension of Riah Phiyega last week, pending an inquiry into her fitness to hold office.

The allegations of his alliance with Mdluli fly in the face of Phahlane’s swift moves in the wake of his appointment to portray himself as a reliable career police official who has paid his dues.

Several colleagues have also publicly insisted that he was not aligned with any internal police faction.

The 250 posts have formed part of a wider Hawks investigation of crime intelligence that began in 2010. The factional battles in the division have had a ripple effect in the police, spreading to the Hawks, the detective units and the National Prosecuting Authority (NPA).

Both Mdluli and Lazarus were suspended in 2011 in connection with allegations of fraud and corruption linked to crime intelligence’s secret services account, which is meant to fund authorised covert operations.

Their suspensions were briefly lifted before being reinstated in 2012. Mdluli, who has avoided an internal disciplinary hearing for three years, continues to draw his monthly police salary. Sources within the police and the NPA have raised concerns about the perceived political protection he has enjoyed since  charges of corruption were first withdrawn against him in 2011.

Police and crime intelligence sources have also alleged that 15 of the 250 posts were awarded to people with criminal records.

They claim that among them is Mdluli’s protégé and now one of crime intelligence’s most senior officers, Nkosana “Killer” Ximba.

Ximba was found guilty in 1999 of reckless and negligent driving and sentenced to R3 000 or three months’ imprisonment. In 2005 he resigned from the police.

The source alleges that in September 2007 Phahlane supported Ximba’s re-enlistment, against the express recommendation of senior Gauteng police management, who objected to the fact that Ximba had a criminal record.

In 2010, when he was to be appointed to the rank of colonel, Ximba allegedly completed an application form under oath in which he did not mention his previous conviction. Based on this, a case of fraud and perjury was opened against him. The case is still under investigation.

Allegations have previously surfaced that, shortly after Mdluli was appointed crime intelligence head in July 2009, he rapidly promoted Ximba from constable to colonel.

Although Phahlane has not faced charges over the 250-post scandal, evidence led in Lazarus’s disciplinary hearing supports allegations of his involvement.

In his December 2013 ruling in the disciplinary inquiry, advocate Paul Pretorius referred to “aspects of evidence” led during the hearing that were “relevant” to a charge against Lazarus that was related to the 250 appointments.

Included in the evidence listed by Pretorius was that “General Phahlane apparently finally approved all these appointments”.

He further noted that a witness who testified on behalf of the police against Lazarus “agreed to a proposition put to him in cross-examination that Phahlane had the ‘final word’ in the relevant appointments”.

Although Pretorius did not find Lazarus guilty on this charge, he noted that the general should share some of the responsibility for the appointments, his role “was not major or decisive”.

Pretorius also referred to evidence by police witnesses “that it was practice to appoint family members in the SAPS”. He noted: “lf it is the attitude of SAPS that the appointment of family members of Mdluli was improper and, in fact, unlawful, it is a matter of some concern that Mdluli himself has not yet been charged and that the appointments were confirmed and apparently allowed to stand.

“Whatever doubts or suspicions that may arise as a result of the appointments, it appears that these have, in fact, been condoned.”

He repeated his finding that Lazarus “was not responsible for the final appointment”. “Several senior serving members of SAPS were involved in the appointment process. None has, to the best of my knowledge, been called to account.”

Lazarus is  appealing against some of Pretorius’s findings against him. At the same time he is facing criminal charges of fraud, theft and corruption in the Pretoria magistrate’s court, alongside the division’s former head of procurement, Colonel Hein Barnard. Their case has been postponed until early next year.

Separate charges of fraud and corruption against Mdluli relating to the abuse of the secret service account, controversially withdrawn in December 2011, were reinstated last year by former prosecutions head Mxolisi Nxasana.

But the case hit a stumbling block earlier this year. When Mdluli, Lazarus and Barnard appeared in court in May, Hawks investigators were still waiting for certain documents to be declassified by Phiyega.

Following a request by the state prosecutor for a postponement, the matter was struck from the court roll.

Nxasana had apparently given the documents directly to Phiyega to declassify. It is unclear whether Phahlane will now be given this responsibility.

Ximba was allegedly promoted to brigadier, alongside several colleagues who had formed part of a task team set up by Phiyega to investigate convicted mobster Radovan Krejcir in 2012.

The task team has investigated  a number of cases allegedly involving Krejcir, including murder, kidnapping and torture.

Ximba has been one of the task team’s lead investigators and was allegedly present during Krejcir’s arrest in 2012 on kidnapping and attempted murder charges.

Krejcir and six others were convicted and are awaiting sentencing.

Ximba’s role in Krejcir’s arrest remains unclear: the Czech claimed that Ximba tortured him the night of his arrest.

Although the court accepted that Krejcir was tortured, it did not make a determination on who the perpetrator was. In his ruling, high court Judge Colin Lamont noted that, although the task team’s investigation was poor, there was no evidence of conspiracy, as claimed by Krejcir.

Lamont added that, “whatever [Ximba’s] role … or involvement” in the investigation, “whether as a rogue operative or if he was gathering evidence for the police … it doesn’t undermine the evidence” against Krejcir and his co-accused.