Neo M Matsunyane on being king of the open road 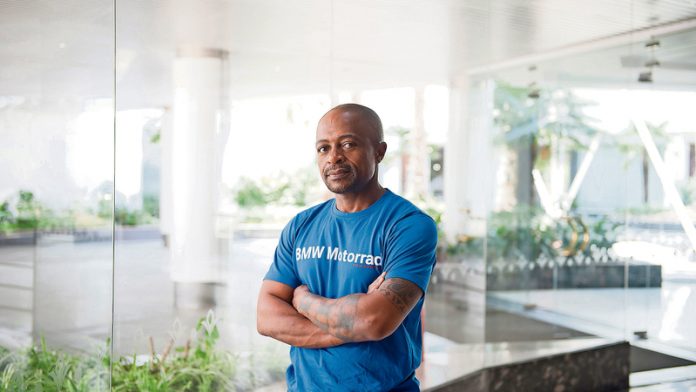 South African actor and director Neo M Matsunyane has finally found his passion – behind the camera.

He broke into the entertainment industry in the 1990s, starring in TV shows such as Kelebone, Generations, Going Up, Soul Buddyz IV and Ke Nyala Mang and, 17 years later he still has audiences glued to their television screens.

But this time it’s through directing the SABC1 Sepedi soap Skeem Saam, which has a viewership of just over four million. He made his directorial debut in 1994 with three episodes of the SABC1 youth drama series Young Vision.

When he is not directing actors on the studio set, he is out riding the open road with his motorbike club, the Blaque Diamonds. Matsunyane is a brand ambassador for South Africa’s first ever BMW Motorrad Days – a motorcycle and music festival in Clarens, Free State.

The festival is often held in the German town of Garmisch-Partenkirchen, where it draws a crowd of some 40?000. South Africans can look forward to a Motorrad programme that includes motorcycle stunts by international freestyle stunt biker Mattie Griffin, live performances by Die Heuwels Fantasties, CrashCarBurn, Mean Mr Mustard and Ard Matthews, as well as exhibitors.

And Matsunyane will also be on site to shine more light on all things motorcycle related. The Mail & Guardian spoke to him ahead of the festival.

What drew you to motorcycling?
I caught a lift with on a bike with a friend in 1999 and I felt that the kind of power inside the bike was intoxicating. I am an adrenaline junkie. So after one ride, I decided to buy myself a small motorbike. Since then my love for motorbikes has grown in leaps and bounds.

What type of motorbike do you own?
Because of the BMW ambassadorship, I’ve had to dispose of my own bike in order to ride the BMW bike. I currently ride a BMW S 1000 R. It’s a beautiful and unusual bike – it’s not a superbike nor is it a cruiser.

What do you think of the South African motorcycling culture?
When I started motorcycling in the late 1990s, the biking culture existed but it was not quite there. A couple of years later, it picked up momentum, especially around 2001 and 2002. But a lot of guys at the time were not into superbikes. With the emergence of motorbike clubs, we then started seeing more and more motorcyclists. Somehow the wave of motorcycling caught up with us.

Motorcycling also took on a different face when black people started getting into it. We now have huge organisations such as Rambo (Rainbow Mzansi Bikers Organisation), which is rated as the largest black biking organisation in South Africa.

Seeing that there will be stunts performed at Motorrad Days, can we also expect some from you?
No. I don’t want to break any bones. At my age there are no spare ones.

We haven’t seen you in front of the camera in a while. What has your experience been like working behind the scenes of Skeem Saam?
I have been in this industry for such a long time and I have never had this much fun working on a production. Of all the productions I have ever done in my entire TV career, this is the best production I have worked on. I think what makes it such a winner, is that a lot of the people who work on it actually do get along. I have never seen such camaraderie.

What do you think of the current increase in local TV shows written in indigenous languages?
I have always been pro vernac as I started out with those types of dramas in my acting days. I believe in heritage and in the restoration of language. There is a generation of children who don’t speak an African language and it’s something to consider. How much more are we colonising ourselves? The acknowledgement of indigenous language is something I believe should be kept alive through TV because it’s a very influential medium and it is one of those drivers that can help in sustaining our languages.

How do you keep your content fresh and current?
I look at social media a lot to see what people are saying. For instance, while working on an episode, I also check social media to see how many people can predict the outcome of the storyline. This also helps with how I develop my script because the audience can pick up on a lot of things in a story. They are not a stupid audience, so you can’t take them for granted.

However, we can’t spread the imagination with things that will make people say, “this is too much”. There is only so much of suspension of disbelief that the audience can take. Otherwise you are going to end up looking like these other soapies whose names I can’t mention.

Do you have plans to get back into acting?
No, not immediately. If I were to get back in front of the camera, it would probably be in a cameo role of a movie that I’m directing and people wouldn’t even see that it’s me. I have more fun being behind the camera than in front of it; it’s more challenging for me. I think being behind the camera is my calling and acting was more of a stepping-stone.

What else are you working on?
At the moment, I am focusing on Skeem Saam as my first call but I will be working on other projects that are currently in various stages of development. I’ll be touring Kwa-Zulu-Natal, Swaziland, Mozambique, Zimbabwe and Malawi in December and shooting and presenting a TV programme on motorcycles. But I can’t say much on the show.

The BMW Motorrad Days is in Clarens, November 6 to 8. Visit bmw-motorraddays.co.za

Bored in the house? Here's a list of shows and talks to binge on while you wait to go outside
Read more
Advertising
Continue to the category
Politics