Diary of a hitchhiker in Armenia 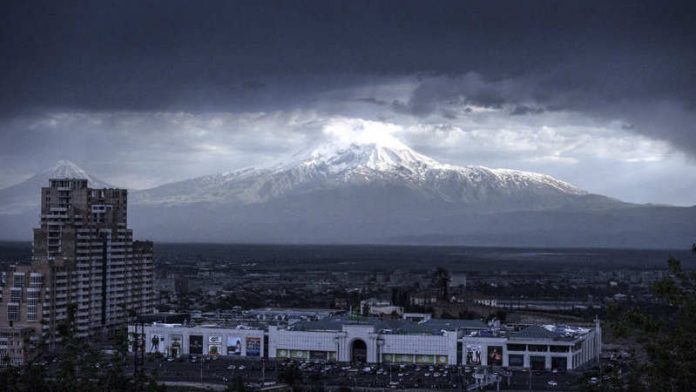 It’s going on midday, but the air is still crisp. The forested hills surrounding the valley are a mass of sparkling reds, golds and yellows; the last of the autumn leaves. Already the high mountains are covered in snow.

This stretch of road is quiet – only two cars have passed by in the last while. A red minivan appears around the corner. The lone backpacker adjusts the straps of her backpack, slaps a smile on her face and sticks out her thumb. The minivan slows. She gestures hopefully and the driver pulls over. “Ijevan?” she asks through the rolled-down window. “Ayo,” he answers, reaching over to open the door. Yes, he is going to the next town.

She clambers in, stuffing her bag underneath her legs and reaching for the seatbelt. There is no seatbelt. She holds on to the armrest and tries not to notice how fast the driver is taking the corners with one hand as he lights up another cigarette.

“Ijevan?” he asks. She nods, “ayo”. He says something else, but she doesn’t understand so he starts listing countries. Oh, he’s asking where she’s from. “Haravayin Afrika,” she answers, grinning as he looks suitably impressed with her pronunciation.

After three days in Armenia she’s learnt a handful of words that are, surprisingly, enough to get by on. Well, that and much gesturing.

She’s in Armenia as part of a six-month backpacking trip through Turkey, Greece, the Balkans and Georgia. Armenia wasn’t part of her original plan, but she’s heard good things about this off-the-wall destination and wants to see it for herself, deciding to hitchhike her way around the country. And, well, who goes to Armenia anyway? It should make for a good story back home in South Africa.

She’s a seasoned traveller, a backpacker who has slept on beaches and couches, in bus stations and all manner of budget beds across more than 40 countries. She’s spent years travelling on her own, favouring personal accounts of places she’s heard of along the way to any well-researched guidebook. Her routes have seldom been about the must-see sights: the museums, the ruins, the tours that race from one stop to another. She’s a wanderer. It’s the journeying to unknown places and the interactions with different kinds of people that she’s after.

The driver, puffing on his fourth cigarette by now – she hadn’t yet met an Armenian man who didn’t smoke – insists on having a conversation with her despite their obvious language barrier. He wants to know where she is going. She points towards the mountains to the northeast: “Berd.” She wants to go to Berd via the mountain pass from Ijevan.

He looks sceptical but she insists, explaining that she wants to see the deep mountains. He shakes his head. “Voch,” no one drives that way. It’s better to stick to the tar road and travel further north before heading east to Berd.

He doesn’t understand, she thinks. It’s not about getting to Berd, or to Ijevan for that matter; from what she’s seen, Armenian towns have little to offer in the way of tourist sights. It’s the going, the being on the road, the views along the way and the interactions with locals that she is after.

She asks again, and with a mixture of signing and her handful of Armenian words, she gets to understand that few cars take the mountain road and she is taking a chance trying to go there. But, like other generous locals she has met along her journey, he would like to help her, offering to take her to the village on the outskirts of Ijevan where she can try to catch a ride further on. A flash of worry crosses her face, but what is a journey without a few kinks along the way. “Okay, ayo,” she’ll try for a ride from the village.

The village of Gandzakar is high above the smokiness of late-afternoon Ijevan. A group of schoolchildren, scarves fluttering, dash past an old woman hunched over her bulging grocery bags. She is dressed in black – black coat over a long black skirt, thick black stockings and practical black shoes – except for her floral patterned headscarf. The steep streets are rutted and muddy, the houses worn and grey.

The driver lets the backpacker off, looking concerned and leaving her with his phone number scrawled on a piece of paper.

A Soviet-era truck bearing heavy-duty logging chains lumbers out of the forest and down the hill. That is where she wants to go. She drops her bag on the ground beside her and looks hopefully back down the road. A white sedan rattles past, but turns off before the road. Another jeep clatters out of the forest. She waits, hugging her jacket closer against the late-afternoon chill.

She’s attracting some attention from some curious locals. A young woman stops to find out what the backpacker is doing here. Her explanation is smoother now: to Berd via the mountain pass. Another woman stops. She’s wearing a garish dressing gown and slippers, despite the mud in the gravel road. Her front teeth are missing and the others are crooked and gold-capped. She smiles widely.

This woman isn’t hopeful the backpacker will find a ride into the mountains, but seems happy standing there, chatting and gesturing. The backpacker looks at her watch; it’s been an hour’s wait. With a sigh she folds, gesturing that she will make her way back down the hill to find a place to stay in town. Her companion nods knowingly, beckoning with an invitation for “café”. Turns out they had been standing right outside her house; accepting a parting coffee would only be polite.

Gulnara’s home is a two-roomed building. The kitchen is a bare, three-sided addition with no running water, the pigs are snuffling in an outhouse behind the washing line and the vegetable patch sports a few hardy winter plants.

The wood-fired stove – for heat and cooking – is inside the living room, which also serves as Gulnara’s bedroom. The young woman from earlier walks in. She is Gulnara’s daughter, Mirina, and gets coffee on the go. She fills three tiny cups with ground beans and water and places them on the stove top. The coffee is strong and dark, and is accompanied by a small dish of sweets.

The conversation – in Armenian, English and much signing – seems to go around in circles, but the backpacker understands their invitation for her to spend the night with them in their home. These women, who have so little, are willing to share their home and evening meal with a stranger, just because generosity and hospitality are part of how they understand the world.

Their agreement settled, Mirina shepherds the backpacker out into the grey evening to shop for dinner and to show her off to the clutch of women chattering in the tiny market, dusty shelves holding canned food, plastic homeware, bottles of vodka. Back home, Gulnara peels potatoes from her seat next to the warm stove while Mirina prepares plates of pickled peppers and fried chicken pieces.

A steady stream of neighbours show itself in, curious to find out what this blonde, backpack-toting woman is doing out on the road on her own. The conversations are often one-sided, with a lot of nodding and pointing and smiling from the backpacker. It doesn’t matter what is said, though, it is enough that she feels welcome among strangers.

Gulnara’s husband and son arrive in time for dinner, which is accompanied by an endless stream of vodka, each drink a long-winded toast to absent friends, family, the country, each other. And finally, when each of the men at the table has eaten his full, Mirina ushers the backpacker into the second room where she is given one of the two beds for the night. The room is cold, the windows insulated with a thick piece of plastic, but the bed is warm and the backpacker feels safe.

“Thank you,” the backpacker whispers to Mirina in the other bed. Thank you for the kind of experience that she will remember for years to come, a story that she will tell again and again; accepting the kindness of strangers and being offered a glimpse into their lives, their culture, their way of living.

Stacey Nel feels most alive when she’s on the road to places unseen. To keep her family informed of her whereabouts she writes a blog, girlonawander.wordpress.com