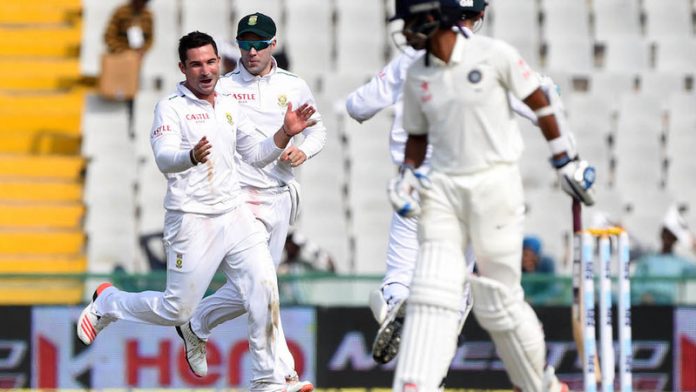 The greatest courage often comes unplanned and in adversity. Too much thinking time creates doubt, certainly in sport, and most definitely when applied to team selection.

The Proteas starting XI for the first Test against India in Mohali on Thursday caught almost all observers by surprise and represented a giant leap away from the cornerstone of the strategy that has underpinned their success for the past four years. And it was the right thing to do.

It was evident a week before the match started that JP Duminy’s injured hand would not heal in time for him to take his place as the number six batsman and second spinner, but when Morné Morkel failed a fitness test on the morning of the match there were some rapid decisions to be made.

Playing seven specialist batsmen has served the Proteas superbly for a long time. In truth, they were in effect a 13-man team when Jacques Kallis was playing and AB de Villiers had the wicketkeeping gloves. But that is not the case now and the team has the same look of vulnerability as every other.

But, instead of playing it safe in the absence of Duminy and Morkel, they went on the attack and played an extra bowler – and an extra spinner, no less. Temba Bavuma made a spirited half-century in the last Test the team played against Bangladesh and would have been the safe choice at number six.

It would also have ignored the facts staring them in the face for three days before the game began. The pitch was bone dry and would offer generous spin from the first day. It was as dry on the first day as a typical South African pitch is on the fifth. To select just a single spinner in the absence of Duminy as back-up would be to spurn an opportunity.

But it required every ounce of selectorial effort for the management group to heave themselves away from their natural South African conservatism. Instead of keeping the ball among the forwards and sticking to the grinding maul, they picked their fastest backs and spread the ball wide. It was stunning to see.

The Indian batsmen all believe they can read Imran Tahir’s mixture of leg-breaks, googlies and top-spinners as easily as a Peter and Jane book, and aren’t afraid to say so, and Simon Harmer has never alarmed anybody with his gently turning off-breaks, but they are two frontliners and that says everything about the positive intent of the approach.

How poetically ironic, then, that it was a third spinner, part-timer Dean Elgar, who did most damage on the first day with an astonishing four wickets to shock the hosts, who won a potentially crucial toss and chose to bat, into a deep hole at 154-7. India were all out for 201 on Thursday.

By now it should be abundantly clear whether the selection gamble has worked or not, particularly if the Proteas’ top five batsmen have failed to deliver the 300-plus runs expected of them. Placing wicketkeeper Dane Vilas at number six in just his second Test is asking a great deal of him. Vernon Philander is also a place too high at number seven.

Dale Steyn suggested two days before the match that the bowlers expected to, or at least were prepared to, try to contribute with the bat: “Eight years ago in Australia we believed the series could be decided by how the tailenders performed with the bat and we worked our butts off facing bouncers in the nets, and it worked,” Steyn said.

It certainly did. Paul Harris somehow found a way to stay at the crease if he wasn’t scoring runs and Morkel, too, hung around. But it was Steyn’s career-best 76 in the second Test at the Melbourne Cricket Ground (along with his 10 wickets) that did most to ensure they became the first South African team to win a series Down Under.

“Hopefully we can repeat the win here,” said Steyn with a glint in his eye, “although it won’t be bouncers that we’re worried about. We have all been working with guys like Hash, AB and Faf to try to counter the spinners.”

There is a steel to this team that was most clearly illustrated before the Test series began by its least-experienced players. It is probably because the “youngsters” are, in fact, not youngsters.

Opening batsman Stiaan van Zyl has just turned 28 and has a decade of first-class experience. Vilas is 30 and has been a counterattacker all his life. Harmer (26) has played 65 first-class matches and, like all off-spinners, has become used to the fact that successes are few and far between and require a huge amount of hard work and patience. If his dismissal of opener Murali Vijay for 75 on day one is the only wicket he takes in the Test, it might still be one of the most important.

There was much talk from everyone about “taking responsibility” and not leaving the pressure moments for the senior players to handle.

But perhaps the clearest pointer to the attitude towards selection and the way the team intend to play came from captain Hashim Amla. When asked about defending the Proteas’ proud record of 14 unbeaten away series spanning nine years, he replied: “If we try to defend it, we’ll lose it. We must try to win.”