Sharjah Book Fair: Literature is a weapon of progress 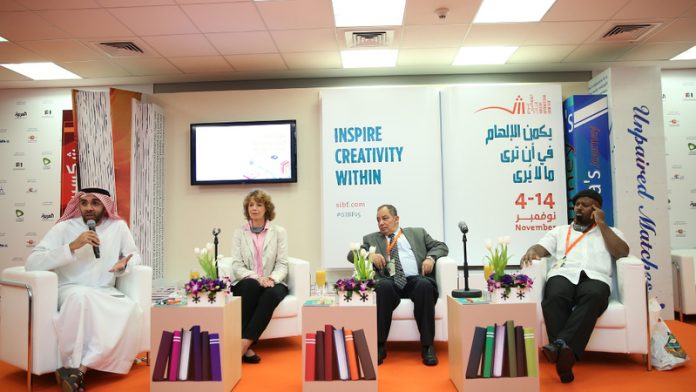 Dubbed as the capital of culture in the United Arab Emirates, Sharjah is the host of the 34th Sharjah International Book Fair (SIBF) that’s currently underway at the city’s Expo Centre until November 14.

The fair opened with the SIBF 2015 award ceremony on November 4. It recognised authors and publishing houses that have contributed notably to the Arab culture. The cultural personality of the year award went to Prince Khalid Al-Faisal, adviser to Saudi King Salman Bin Abdul Aziz and governor of Makkah Province; and the best Emirati book by an Emirati creative writer award went to Hareb Al Dhaheri  for his novel Ascension to Heaven. The award for best Arabic novel, meanwhile, went to Zeyad Ahmed Mahafza for Prisoners of Darkness and the best international fiction book award was presented to Thuraya Khan for the novel City of Skies.

“Arab intellectuals should play an important role in raising awareness and spreading knowledge and culture and not be silent during the critical times that the Arab world is going through,” said Sheikh Muhammad Al-Qasimi in his speech.

Guest speaker Ahmed bin Rakkad Al Ameri, chairman of the Sharjah Book Authority (SBA), added that literature should be used as a weapon of progress in a time when world is burdened by the absence of culture.

The fair features over 600 publishing houses from 64 countries from around the world. According to Sheikh Muhammad Al-Qasimi, the Sharjah Book Fair allows all books to be sold except those that attack people or religious values. Sharjah is an Islamic state.

“There are authors who are prejudice and who incite hate, but we don’t censor their books,” Ameri tells the Mail & Guardian. “Instead we fight those books by promoting books that fight ideas that are prejudice .”

“We are trying to promote reading and fight hate and extremists through literature and the love for written word.”

The fair runs for 10 days – with school children and university students filling up the expo  centre during the day and families at night. Weekends are peak time for the fair.

“The Arab industry is different from any other industry. The publisher here is the wholesaler and he is the bookshop,” says Ameri. “For them [publishers] the book fair is the only way to distribute their books around the Arab world because there is no existing distribution company that can cover all of the Arab world. What I think we are doing here is giving the publishers the ability to find a way to promote their books to the market and the readers and ten days is good for them.”

Sheikh Muhammad Al-Qasimi also used the fair as a platform to launch his latest book entitled Chronicles of a City, which tells the story of the city of Sharjah during the British occupation of the region and the subsequent political turmoil. Sheikh Muhammad Al-Qasimi, who has been a ruler of Sharjah since 1972, has published over 20 books and written about eight plays.

The Sharjah International Book Fair was first held in 1982 as part of his vision to promote literacy in city.

Apart from exhibitors, the programme consists of demonstrations by chefs, presentations by social media activists and panel discussions with topics that include: The reality of culture in the Arab world, Problems with translations and tackling social issues in fiction.

“Our aim is to promote authors from all over the world and create a space for them to experience each other and network,” says Al Ameri.

According to Hassan Yaquob, who chaired one of the discussions, the thorny issues that have been brought to the table have so far been dealt with smoothly. And although the panelists shared great knowledge on their assigned topics, some just scratched the surface of what could’ve been robust discussions.

The UAE opens up its heart

The little-known city of Sharjah deservedly plays a very special role in the Emirates.
Read more
Advertising
Continue to the category
Politics