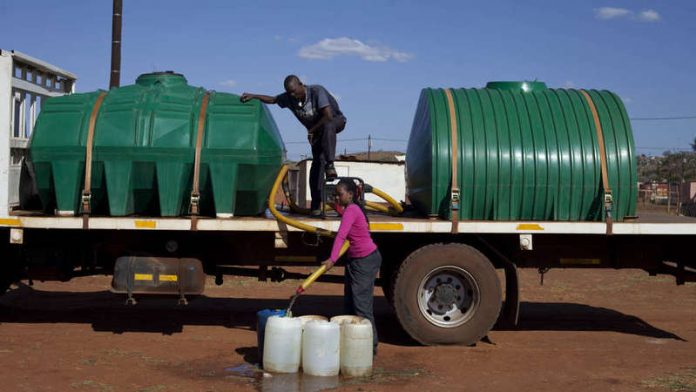 The drought truly hit home when more water restrictions were imposed this week in the country’s economic heartland.

As the taps ran dry in Johannes-burg and the City of Cape Town confirmed it was in the process of authorising water restrictions, parallels have been drawn between South Africa’s long-standing electricity crisis and the water shortages.

Years of patchy planning, chronic underinvestment in infrastructure, and the sale of a resource at prices that do not reflect the cost of supplying it have finally caught up with the government and consumers alike.

As with the electricity sector, large industry and commercial users are said to get water at discount rates or pay a flat fee that does not increase with the amount of water they use.

But water specialists and providers say this is not the case everywhere; prices will vary according to the authorities from which they get their water – municipalities, water boards or the national department.

Government has begun to re-examine the value of water by reviewing its water pricing strategy.

Revenue flows
This comes at a time when many large industries are cutting their consumption by means of recycling and other efficiency measures, thereby reducing their reliance on state water suppliers. This has implications for the revenue flows of municipalities.

Municipalities are losing R11-billion each year in distribution losses such as leaks and water that is never billed or paid for, said Anthony Turton, of the University of the Free State’s centre for environmental management, in a report published by the South African Institute of Race Relations.

In the 2013-2014 financial year, Johannesburg’s nonrevenue water (lost, unbilled or stolen) was 41%, Ekurhuleni’s was 38%, Nelson Mandela Bay’s was more than 42% and Cape Town’s was just over 21%, according to the national department of water and sanitation.

After electricity and rates charges, water tariffs are the third-most important revenue source for South Africa’s major cities, states the most recent State of City Finances report, released by the South African Cities Network. Water tariffs constitute 12% of Johannesburg’s revenue, 11% of eThekwini’s, 13% of Ekurhuleni’s and 10% of Cape Town’s.

He said that Rand Water’s charges should reflect the “true cost of supply”. Given the complexity of the network needed to feed the municipalities, it can become costlier to supply the domestic user, as opposed to one bulk point for an industrial consumer”.

Water restrictions
In the face of the worsening drought, Sechemane said Rand Water would treat all customers equally – including industrial customers – should water restrictions increase. It was only customers such as Eskom and Sasol that receive untreated water that were unlikely to be affected by restrictions.

He said Rand Water was maintaining production levels, and had even raised them to 4 800 megalitres a day. The water shortages seen in parts of Johannesburg were a result of the current heat wave that has led to a spike in demand.

The additional demand meant the reserves in its reservoirs were not able to rebuild overnight and for this reason Rand Water was considering imposing restrictions at this time, Sechemane explained.

He added that cities such as Tshwane and Ekurhuleni, which had implemented water restrictions earlier than Johannesburg, were not experiencing this problem.

The City of Johannesburg didn’t respond to the Mail & Guardian’s questions. But Xanthea Limberg, the City of Cape Town’s acting mayoral committee member for utility services, said customers who rely on water for commercial, industrial or agricultural purposes can apply for an exemption from restrictions. “Each case will be considered on merit,” she said.

The City of Cape Town had met national government and the two had agreed that an additional 10% of water saving had to be realised for the Western Cape region, Limberg she said, adding: “Water restrictions have been deemed necessary because dam levels are currently lower than in previous years.”

She explained that low-level restrictions are part of normal water demand management and were a precautionary measure to avoid greater restrictions in future.

Free water
But this did not mean it was losing all this water. This figure contained all water that is not billed for, including free water provided to informal settlements and water not accounted for because of metering inaccuracies.

The City has put in place capacity to treat effluent for reuse at its wastewater treatment works. About 6% of all water is treated and recycled for irrigation and industrial purposes.

Mike Muller, a visiting adjunct professor at the University of the Witwatersrand’s school of governance, said there was no single price for industrial water users, who get their supply from municipalities and water boards or, in the case of very large users, take raw water from the national department’s systems.

Government policy says all water users should be charged the full cost of supply. But Muller said the cost of water varied tremendously from place to place and also depended on the volume and quality required.

Water has many values beyond the cost of providing it as it is a basic human need and ensures food security, but it is also a luxury when used for swimming pools and gardens.

He said that, in the case of large industries, it was difficult to determine what wasteful usage is: they all differ and there are no universal standards.

The best approach is to ensure businesses pay the full cost of their water supply, he said. Where there are shortages, they can be required to pay the marginal cost – or the cost of building the next supply scheme – which can be built into a tariff.

It was important, however, that government at all levels, including municipalities and water boards, implemented the national water pricing strategy, which applies to large users, and the national pricing guidelines for municipal use.

Future water requirements
Both these policies are being implemented with varying degrees of success. Muller said it was crucial that authorities “get a handle on who uses how much water” – the last formal national estimate was in 2000.

Only once this was grasped would South Africa be able to understand its future water requirements, how to meet them and whether the price of water reflects costs.

It is fashionable in electricity to call for decentralisation and self-supply, but it had side effects in this and the water sector, argued Muller.

Self-supply, through boreholes or water-efficiency investments, could be costly and will reduce the overall productivity of the economy. And once big industries and rich households have invested in self-supply, the poor will be left on their own, with no support or cross-subsidy.

The drought has heightened concerns over water quality.

Anthony Turton, from the Water Stewardship Council Trust, said two-thirds of South Africa’s dams are eutrophic – the water is laden with nutrients that promote plant and algae growth.

In a paper for the South African Institute for Race Relations, he said a huge culprit was many municipalities’ failure to treat effluent properly at their sewerage works before returning it to the country’s rivers. This has huge implications for the future availability of water for development.

It also poses health threats: eutrophication promotes cyanobacteria or blue-green algae blooms, which produce a toxin called microcystin, which affects the liver and nervous system and is carcinogenic.

And, he adds, none of South Africa’s water purification systems can remove this toxin. Percy Sechemane, chief executive of the country’s largest water board, Rand Water, echoed these water quality concerns. “More often than not you might find that wastewater treatment works of municipalities are responsible for the quality of water.

“If they are not looking after their infrastructure, everything ends up in the water and we end up having to deal with it.”

Another risk to quality is continuing development of personal healthcare and hygiene products including soaps, shampoos and even clothes, said Sechemane. Rand Water was advocating for greater enforcement of legislation, including a request to the national department for funding to enable it to monitor the Vaal River system.

This could bring down operating costs because it would reduce the need for aggressive and costly treatment regimes to maintain or improve water quality, Sechemane said.

Turton told the Mail & Guardian it was essential that South Africa move to a “dual-stream reticulation economy”: different streams of water with different qualities should be sold at different prices for different uses. It doesn’t, for example, make sense for “drinking water to be used to make bricks”.

But large industry should be seen as part of the solution because it has the capacity to recover its own water, Turton argued. He explained that it makes sense that bulk consumers get discounts but it is very important that the country recovers the cost of infrastructure, which is not happening currently.

The department of water affairs and sanitation did not respond to requests for comment.

As the Karoo hopes for an end to its worst drought in a generation, the region’s history may hold important lessons for its future
Read more
Environment

Roughly 45-million people in southern Africa are in urgent need of food aid as a result of drought, flooding and economic hardship, the UN...
Read more
Opinion

There is a simple way to boost climate resilience for farmers in vulnerable regions: investment in goat markets
Read more
National

The Eastern Cape government recently declared the province a drought disaster area. And as the climate crisis worsens, so does our mental health
Read more
Advertising
Continue to the category
Politics