The Brother moves in on black tax 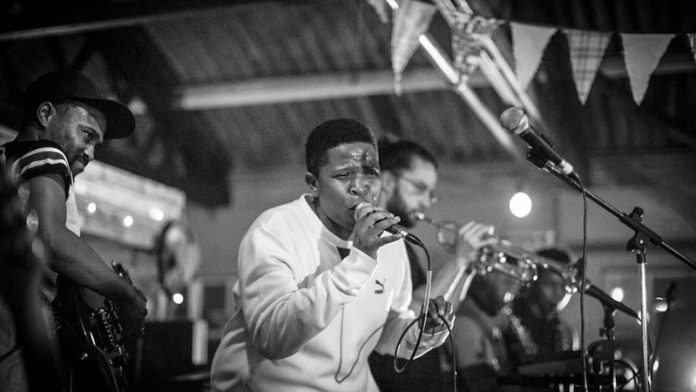 The first time I saw the Brother Moves On live they performed an acoustic set at the David Krut gallery in Newlands, Cape Town, in front of an audience of fewer than 20 people. This was four years ago and it seems like a world away now.

The country was in a different psychic space then. This was before red berets became synonymous with the clarion call of “economic freedom in our lifetime”; before that afternoon in August 2012 when police gunned down miners at Marikana for demanding a reasonable wage; before the groundswell of the #FeesMustFall protests showed up the inertia of the ruling elite.

Between these and those times, the Brother have gained a reputation as conscious social commentators and musical mavericks, pushing the boundaries of live music.

Their discography to date consists of two EPs – The Golden Wake and ETA – and one full-length album, A New Myth. Their music – to paraphrase Katrina Ackervitch’s review of Black Radio by the Robert Glasper Experiment – is grounded in the present tense and yet reverberates with collective memory.

And like their sonic ancestors Thandiswa Mazwai, Busi Mhlongo, Moses Molelekwa, Zim Ngqawana (and others), their music opens up portals to other worlds. It’s spiritual in that sense, of aiming for transcendence.

The opener, Bayagoloza, on their latest offering – the two-track EP, Shiyanomayini – is a soul-searching hymn, which brings to mind Thandiswa Mazwai’s Thongo Lam. “Bayagoloza/ baykhala/ bathisenzenina [They are unhappy/ they are crying/ they are asking what they have done],” laments lead vocalist, Siyabonga Mthembu.

The song speaks to the spiritual malaise of the times and is infused with the same yearning for a redemptive politics, which permeates a lot of South African pop culture. It’s there in Masande Ntshanga’s incredible debut novel, The Reactive, for instance, or in Sibs Shongwe-La Mer’s bleak feature film, Necktie Youth.

“We had been chatting about how taxing our journey has been and realised that the thread in all our tracks was this idea of black tax,” Mthembu says, explaining the origins of the title.

The Brother Moves On has what lead singer Siya Mthembu calls a “revolving door policy”.

And what a taxing journey it has been. Since the 2013 release of A New Myth the band has shrunk in size with the departure of guitarist Raytheon Moorvan who is leaving the country, and a major South African record label came knocking at their door. But the deal fell apart because the specifics were weighted far too much on the side of the label.

Despite critical acclaim, commercial success has eluded the Brother and this has constrained their bargaining power.

“The industry machine is broken and the financial risks are being taken by the artist as an entrepreneur,” Mthembu says. “The industry still harps on about exploitative industry standard norms and only wants to enter the fray when the risk turns into something worthwhile. Labels are not coming on as business partners and publishers and have become glorified artist banks.”

The setback with the deal led to some soul-searching and “rethinking about how the industry relates to the essence of the idea of [the Brother]”.

The band plans to release a new song from Black Tax each month for the next eight months as a way to promote the album. Shiyanomayini, the title track of the EP and the DIY music video that accompanies it, is the first step in that direction.

Inspired by guitarist Zelizwe Mthembu’s multiple run-ins with muggers on the inner-city streets of Johannesburg, the song is a complex, layered examination of crime in South Africa told from four different perspectives.

The mugging underlines the all-pervasive problem of capital and its distribution in South Africa. But what makes the situation more complex is that amagents in the song are themselves brutalised human beings. Political philosopher Achille Mbembe describes them as the “people with no stake” – a vast mass of “superfluous beings” that the state and the market have no use for. And because they have been abandoned they have nothing left to lose.

Keeping with the temper of the times, Mthembu says Bayagoloza and Shiyanomayini are both about the “spiritual and material taxation in relation to our black context”.

“We are that older sibling that gets to go to varsity or work first and will have to pave the way for their siblings. Our work may not necessarily pay us what we need, but we’re hoping that our younger siblings will unearth the value in our sacrifice and in doing so reach further than we can.”

A more equitable and fair society, able to conquer the effects of pandemics, starts with debt-free education and skills development
Read more
Friday

Spirituality at the core of sax great’s sound

The jazz musician has always been a visionary and a team player. He is now launching his solo debut
Read more
Friday

The cost of the great masigodukeni

The great end-of-year homecoming is not as simple as ‘I’m back, folks!’
Read more
Friday

I didn’t grow up with Christmas trees and wrapped presents on the 25th, so the pressure of always bearing expensive gifts isn’t quite there.
Read more
Advertising
Continue to the category
Politics