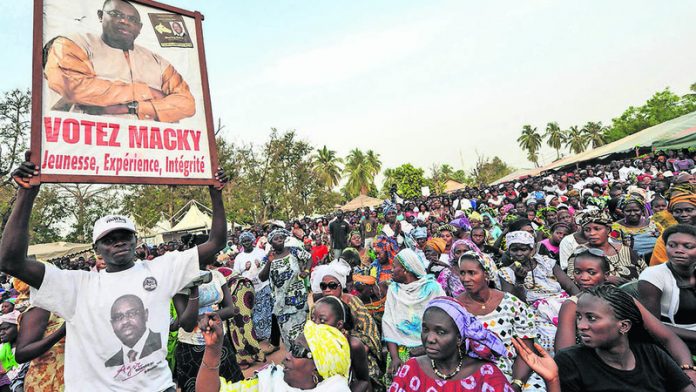 Amid hand-wringing over what role Africa will play to prevent its citizens from getting into flimsy vessels and sailing for Europe, Senegalese President Macky Sall had hard words for the Europeans.

“As long as Africa doesn’t receive the fair prices for its resources, there will be migrant flows,” he said on November 12, at an Africa-European Union summit in Valletta, Malta, on the migrant crisis. “Transformation in our lands would give wealth and jobs in our countries.”

The majority of asylum seekers to Europe were making their way from the North African coast until earlier this year, but those numbers have since been dwarfed by people fleeing Iraq and Syria to Turkey, and from there by boat to Greece.

“There is a fundamental philosophical question: you cannot insist on Africans being readmitted to their countries of origin when you are welcoming Syrians and others,” Sall said at the summit. “The numbers of Africans migrating towards Europe are not as great as people say.”

His call for a fair deal for Africa echoed his position at July’s development finance summit in Addis Ababa, where he said Africa would not need aid if multinationals paid what was due to African countries.

“Illicit money flows and tax evasion are costing Africa between $30-billion [and] $60-billion a year. This is more than total development aid,” he told the delegates.

A listener and a team player
His increasing embrace of such demands for a better deal for Africa could see Sall, who at first glance seems dour, emerge as a significant statesman for his country – the “go-to” guy on a continent that has experienced a dearth of leaders who could be taken seriously since the end of the Thabo Mbeki and Olusegun Obasanjo eras, and the death of Ethiopia’s Meles Zenawi.

Rwanda’s Paul Kagame has taken the wind out of his sails with his push for a third term. Jacob Zuma has shrunk South Africa’s stature on the continent, and Nigeria’s Muhammadu Buhari is too busy sweeping his house to project the country’s clout internationally.

Sall’s emergence would be all the more remarkable as he comes from Francophone Africa, which accounts for just more than a tenth of the continent’s 1.1-billion-strong population.

His approach has little of the table-banging variety of African nationalism and, despite a hint of ­introversion, he is one of the continent’s more approachable leaders.

Diplomats talk of a man who listens and is not averse to being a team player – rare in the African Union.

Sall’s exchange with Barack Obama in 2013 over gay rights captured conservative Africa’s attention, with the Senegalese president deliberately telling his visitor that, although the West African country was not “homophobic”, it wasn’t ready to “decriminalise homosexuality”, before he alluded to the United States’s death penalty, to widespread acclaim by the country’s diverse press, and further afield.

A decisive leader
Sall has also taken positions that set him apart on the continent. Whereas other leaders are seeking third terms, he is expected to shorten his term in office from seven to five years, pending a vote next year.

“I was elected for seven years [but] next year I will propose the organisation of a referendum for the reduction of my mandate,” he told a news conference in Dakar in March. “Have you ever seen presidents reduce their mandate? Well, I am going to do it.”

Sall’s brokering of a deal in Burkina Faso after the coup there in September was also well received. He pitched camp there in his capacity as chairperson of the 15-member Economic Community of West African States. After a hesitant start, he was instrumental in shoving the putschists into the cold, offering them little by way of a soft landing.

He has also further doused the low-level secessionist movement in Senegal’s southern Casamance region. In addition to pursuing a political solution, Sall last year unveiled a development programme to tackle the root-and-branch poverty analysts see as anchoring the rebellion in the region, which is cut off from the rest of the country.

In August 2014, during the Ebola epidemic, Sall closed his country’s border with Guinea, much to Guinea’s annoyance. But it proved a masterstroke: the only reported case of the virus in Senegal was from a man who had travelled to the capital, Dakar, by road from Guinea; Sall’s quick reaction helped to protect the country from potentially devastating economic damage.

The country’s economic growth has further added to his tailwind: the International Monetary Fund purred in September, following a visit to look at Senegal’s books, which revealed growth of 5% this year and 6% in 2016. In August it booked inflation of just 0.6% – by contrast, Malawi is nearing 25% and Sudan is staring at 40%.

Managing the stratospheric expectations stoked by the geologist’s election could prove the difference between whether he manages to secure a ­second term and cement his legacy as a pragmatic technocrat or gets voted out of office.

Many Senegalese believe their living conditions haven’t improved much even as the country instituted a social safety net last year for the first time; they will only grow more impatient for major infrastructure plans to start bearing fruit.