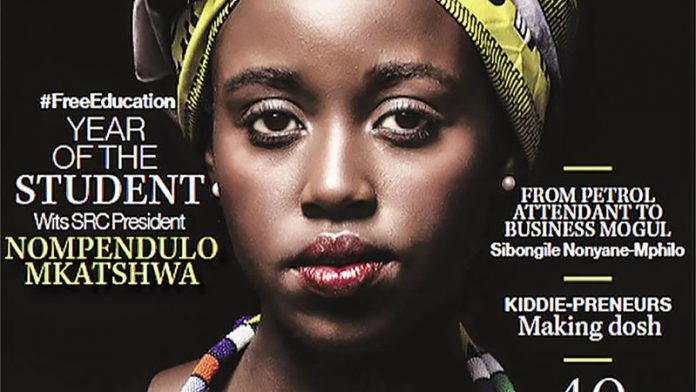 On Sunday evening Twitter lit up after Destiny magazine revealed its December cover star. With the headline “#FreeEducation: Year of the Student” many were pleasantly surprised to see the face of Nompendulo Mkatshwa, incoming student representative council president at the University of the Witwatersrand.

Mkatshwa has played a significant role in the fight for free education, an ongoing campaign alongside ending outsourcing at South African universities. With the likes of Shaeera Kalla, Wits’s outgoing SRC president, Mkatshwa mobilised Wits students against the 10% fee increment for 2016. This led to a university shutdown that snowballed as students across the country brought the issue of high fees to the table at their respective campuses, resulting in the #NationalShutdown.

Through the visibility of these women and various LGBTQI (lesbian, gay, bisexual, transgender, queer and intersex) groups, a conversation arose about the role of women’s voices and action in the movement, inspiring the hashtag #MbokodoLead, a reference to the isiZulu phrase wathint’ abafazi wathint’ imbokodo (you strike the women, you strike a rock).

This was reminiscent of a placard that made the rounds on social media when the statue of Cecil John Rhodes was removed from the University of Cape Town’s campus: “Dear History, this revolution has women queer and trans.”

This is an important development for those of us researching women’s roles in the anti-apartheid struggle; we find ourselves hitting dead ends because there is very little material on women and their valuable role before 1994.

So Destiny got it right by having this black woman on the cover of the magazine. But it got it so wrong in so many other ways.

By picking a face out of a movement of leaders, the magazine has made the mistake history tends to repeat by particularising a liberation movement because of its obsession with the need for a protagonist, a hero or heroine of the narrative.

As I weighed in on the online debate, a contributing writer of Destiny, who ironically is a brand strategist, commented on my profile’s background image of Winnie Madikizela-Mandela, noting the “extraordinary parallels” between it and Mkatshwa’s cover – to which I responded with a resounding “Nope!” If we were to note parallels, we could possibly identify one: media visibility.

Of the anti-apartheid women activists, Madikizela-Mandela is the most visible and most archived. This is not only a result of her active role as a freedom fighter but also because of her husband Nelson Mandela. She notes this in the autobiography Part of My Soul Went with Him (1985). Madikizela-Mandela has also clearly stated that it is through the work of women such as Albertina Sisulu, Adelaide Tambo and Lillian Ngoyi that she was able to shape her own political path.

The sad reality is the visibility and archiving of anti-apartheid women activists is dependent on their proximity to a prominent male figure.

This is why #MbokodoLead was important; students of 2015 recognised it would be a grave mistake not to insist on intersectionality, so that black, trans and queer students are not erased from the archive. Madikizela-Mandela has said there are many more women such as Miriam Sotinda and Florence Mophosho, who fought apartheid. These women’s contributions remain largely undocumented because of the mainstream’s laziness to do the work of representing liberation movements as the collective work of all.

Destiny is correct in stating 2015 is the year of the student. But by focusing on one student, it disrupts the cause of representing #FeesMustFall as a faceless movement. Facelessness allows for us to see nuance. It also allows for the movement to reinvent itself as it continues to advance its cause of decolonisation. Facelessness prioritises intersectionality (race, class, gender) so that no student is left behind, especially when it comes to enjoying the spoils of a decolonised and transformed society.

Mkatshwa’s perspective is but one aspect of the intersection. Had Destiny taken their “Year of the Student” title seriously, they would have published a #FeesMustFall issue covering various experiences of students across all campuses – in light of the movement’s introspection regarding classist remarks about Tshwane University of Technology students in the aftermath of the march to the Union Buildings.

It seems Destiny chose a student whose image was palatable to its audience – a “brand” that doesn’t interrupt the magazine’s capitalist leanings, to which #FeesMustFall is antithesis. Making Mkatshwa the face of #FeesMustFall unearths grievances about national attention given to fees because of Wits’s middle- and upper-class status, thus erasing the work students at historically black universities have done over years.

This cover story serves as a lesson to students for the need to guard jealously against erasure.