Africa poised to be axis of Christianity 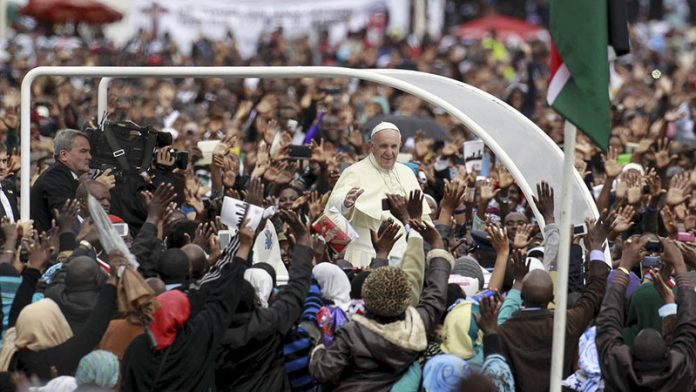 Pope Francis’s six-day trip to Africa, taking him to Kenya, Uganda and the Central African Republic, was more than papal outreach to the Vatican’s scattered global flock. It was also, implicitly, a sign of recognition that the future of Christianity and Roman Catholicism may lie on the African continent.

The silent processes of demographic change have the potential to reshape both Christianity and Islam fundamentally.

Africa is set to experience the fastest overall population growth over the next 40 years, rising from 12% of global numbers in 2010 to about 20% in 2050. Research indicates the continent’s population will surge, while the rest of the world has fewer children and, on average, becomes older. That means that, a mere two generations away, more than 50% of the world’s Christians will live in Africa.

But Islam is growing faster than Christianity globally and Christianity is losing adherents, particularly in the developed world, mostly to the ranks of the “unaffiliated”.

All things being equal, Muslims will surpass Christians numerically after 2070.  At that point, Africa will be the world’s Christian epicentre – the home of the majority of the faith’s adherents.

The geographical centre of the faith has been shifting since Christianity first struck root. By the year 300, the centre of the fledgling faith had moved from Jerusalem to Armenia. Two hundred years later, with the conversion of the Roman Emperor Constantine and the institutionalisation of Christianity as the state religion, it had moved to Rome.

Over the next millennium, with European migration into the Americas, the centre of Christianity moved further west. But in the past four decades, the centre of gravity has moved southwards. By the end of the century, it may be in Nigeria.

Christianity’s 21st-century challenge will be to bridge this divide: although the centre of religious power, money and theological capital remains entrenched in the Global, secularised, North, the energy and expansion of the church will be in the Global South.

Much the same applies to Islam. The Muslim population of sub-Saharan Africa is projected to surge by nearly 60% in the next 20 years, from 242-million in 2010 to 386-million in 2030. Sub-Saharan Muslims will account for a growing share of the Ummah, or collective community of Islamic peoples. By 2030, 17.6% of the world’s Muslims are expected to be living in sub-Saharan Africa, up from 15% in 2010.

Pope Francis’s African pilgrimage may perhaps be a step towards the election of the first black pope. Historically, at least three popes came from North Africa – Victor I (189-199), Miltiades (311-314) and Gelasius I (492-496). But this would be the first time an African would have ascended to St Peter’s Chair in nearly 1 500 years.

Another possible consequence of growing African influence in the Catholic Church could be a return to a more conservative theological position on certain issues, particularly gay rights.

Francis trod carefully on this issue during his visit, disappointing gays and lesbians in fiercely homophobic Uganda by not explicitly calling for tolerance.

By 2050, half of the world’s Christians will live in Africa. But Islam is tipped to overtake Christianity in numbers by 2070. (Mike Hutchings, Reuters)

The growing influence of African conservatives is likely to deepen existing doctrinal conflicts between the northern and southern components of Christian congregations –for example, African Catholics and liberal Episcopalians in the United States – which could result in a parting of ways.

Another issue on which a shift is possible is priestly marriage, given the traditional emphasis on children and the wider extended family in African culture.

Journalist and deacon Greg Kandra, based in the New York diocese of Brooklyn, argues that priestly celibacy is not an essential part of the Catholic belief and that the church “will not have a good reason to keep saying no”.

“Celibacy is discipline, not dogma … it’s not set in stone. Even the most steadfast traditionalists understand that. As John XIII … put it: we’re tending a garden, not a museum,” Kandra argues.

When Christianity becomes majority African, will traditional centres of the faith such Rome and Canterbury retain their centrality?

Both are in retreat across the developed world: the proportion of Catholics in Europe in 2010 was just 23.8%; in the United States, only 24% of adherents attend mass on an average Sunday, down from 55% in 1965.

Recent research by the Pew Research Centre found that if current trends continue, the proportion of Britons who identify as Christian will fall from 64% in 2010 to 45% in 2050.

The proportion of the population identifying itself as “unaffiliated” will rise sharply over the same period, from 28% to 39%. British Muslims, incidentally, will rise from 5% to 11% of the total.

Is it conceivable that a future pope could sit in Africa – perhaps in the Basilica of Our Lady of Peace in Yamoussoukro, Côte d’Ivoire, the largest church in the world, controversially built by former president Félix Houphouët-Boigny as a replica of St Peter’s Basilica in Rome at a cost of $300-million?

Europe itself is likely to become “browner” through migration from Asia, the Middle East and Africa, so it also conceivable that these migrants will have an effect on the European churches from within.

As societies become more affluent, the ranks of the unaffiliated grow and defectors do not pass on the traditions of the faith to their children – or do so in a less intense and binding way.

The implication is that, over time, “religion will no longer win simply by cranking out a surplus of indoctrinated babies and will have to compete on an intellectual footing”, writes cultural critic Bob Seidensticker.

Which religion, then, is likely to dominate the intellectual agenda in the 21st century?

Although the reality of climate change has not yet fully dawned on the world, one could argue that it is likely to burgeon into the most pressing challenge of the coming decades.

The hope is that organised religion will start responding to this threat, and that the creed that presents a more constructive relationship with the natural environment will win out in the end.

In this respect, the Catholic Church under its current leadership is seizing the initiative. Francis has already cast himself as a climate change- crusader, and is increasingly framing the protection of the planet as a moral concern.

In September, South African schoolteacher Benedict Daswa was beatified, becoming the first person in Southern Africa to be declared “Blessed”, a key step towards sainthood.

Daswa, a devout Catholic who rejected traditional practices, was martyred 25 years ago – beaten to death by fellow villagers near Thohoyandou in Limpopo.

Almost unknown when he died, Daswa’s fame grew throughout South Africa’s Catholic community, which is estimated at 3.6-million strong.

That is relatively small by South African standards – just 8% of the population is Catholic.

The majority – more than 70% – is Protestant, with a small minority of Muslims, Hindus, Buddhists, Jews and other religions. The unaffiliated are also a significant proportion – nearly 14.7% of the population – making them the second largest self-identifying group in South Africa.

Protestantism in South Africa tends to be of the dynamic, charismatic kind. In the Pew Research Forum’s 2006 Pentecostal survey, about one in 10 urban respondents said they belonged to a Pentecostal denomination, and more than one in five identified themselves as charismatic, bringing the total to roughly one-third of the urban population.

Africa’s surging demographics means that in the next 70 years most of the world’s Christians will be African, but South Africa’s low population growth means it will contribute only modestly to this trend, according to Pew.

Hindus, Buddhists and Jews are expected to decrease slightly over the same period. Jews will experience the most precipitous decline, falling by more than 50%, from 70 000 to about 30 000.

The fastest growth will be in the Muslim population, according to Pew’s projections, because of natural population increase, immigration and religious conversion. They are expected to increase by 75%, from 860?000 in 2010, to nearly 1.5-million in 2050.