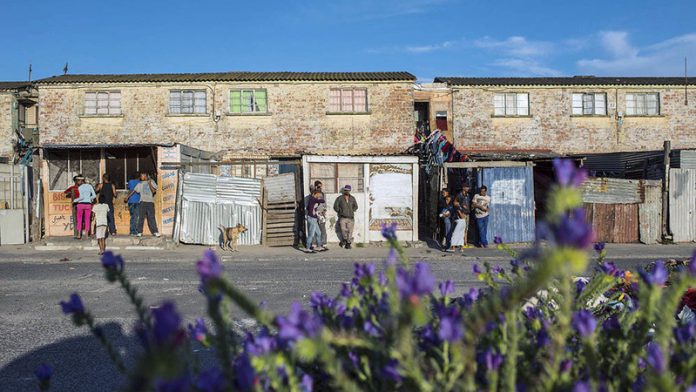 Hanna Abrahams* sits with her hands folded in her lap. With her shoulders slumped, she looks frail after being abused for 11 years, but she now wants to tell her story.

Abrahams (49), a mother of nine, lives in Manenberg, a gang-riddled suburb on the Cape Flats. Drugs, alcohol and weapons flow through the area, leaving youngsters vulnerable to substance abuse and gang violence. Her life was shattered when her eldest son began using tik (methamphetamine) after he dropped out of school and made friends with boys loitering on the streets.

“The abuse started when my son was 18 years old,” she says. “Because we were poor, I couldn’t afford to buy him shoes, so they mocked him at high school and he dropped out.”

To feed his addiction, her son began to beat her and psychologically abuse her by undoing her hard work in the home. When she hand-washed the laundry, he’d rip it from the washing line, soil it and torment her about the money she used on detergent instead of on his drugs.

After an incident when her son choked her with a scarf, Abrahams and her younger children moved into the Saartjie Baartman Centre for Women and Children in Manenberg. The shelter was established in 1999 in response to the gang violence and substance abuse on the Cape Flats.

Children in gang-ridden communities become “numb” to violence at an early age, according to the centre’s director, Shaheema McLeod.

“Some of the sad things that we’ve heard of is children saying that on their way to school they’ll walk over a dead body, and they’ll just move on because this is part of everyday life,” she says.

Abuse and shootings are not uncommon in the formal dwellings and shackland around Lavender Hill. (Photos: David Harrison, M&G)

For women in the Cape Flats the concern is not only for their own wellbeing, but also that of their children. Gangsters are often in turf wars, shooting rival gang members down for more territory to sell drugs.

While Abrahams’s son fell into drug-fuelled hysteria in Manenberg, Lauren Poole* (54) was watching other boys do the same in another gang area on the Cape Flats.

“The boys that grew up with you, that came into your house, they’re now the macho men. They’re now the guys high on drugs and shooting the other gangs,” she says.

Poole has been a single mother for 20 years. In her street there are at least two houses filled with gangsters, but she has no one to help her protect her children. When violence erupts, gang members warn her to stay indoors, limiting her movement.

“When the gang violence comes in your road that is when you think: ‘My life is actually in danger here.’ Many times I’ve felt that, but I have a right to live in this country; this is my freedom – I’ve a right to walk in the road,” Poole says.

She has been active in her area, helping women and children. One of the biggest problems she has noticed is the onus on women to protect their families.

“I don’t see any adult men stand up and say: ‘No, what you’re doing is wrong.’ What I observe is that it’s only women who come to support groups because they are worried about their children,” Poole says. “It’s the women who go out to make sure their kids get home from school.”

The Saartjie Baartman centre offers a safe haven for abused women and children in the area.

But cases of gender-based violence are still woefully under-reported, and just 3% of perpetrators are convicted. Lieutenant Ian Bennett from Manenberg police station says communication is key.

Bennett says gangsters often buy residents’ silence by, for example, footing their electricity bills. “Now the gangs want back, and wanting back is when the abuse starts to happen and nobody will be able to speak up against that.”

But there are some who are courageously confronting gangsterism. Leisl Hendricks* (48) lives just outside Lavender Hill, which has been troubled by shootings over the past two weeks. The domestic violence she endured from her husband has motivated her to help other women and children.

“I see things every day. Do you know how traumatised we are? I’ve been abused, and I decided it’s about time I did something about it. I’ve learned that men can’t treat you the way they want to. You have a right as a human being,” Hendricks says.

Nonprofit Mosaic in Wynberg works to root out gender-based violence.

She organises programmes and workshops to build women’s and children’s self-confidence. But people often turn back to drugs and abusive relationships because of the limited opportunities where they live, Hendricks says.

Her sentiment is echoed by people at the Women’s Legal Centre, a nonprofit institution that focuses on gender equality. Sanja Bornman, an attorney who manages the centre’s violence against women programme, says although South Africa has strong laws and policies against gender-based violence, there is still “a true lack of political will and sufficient resourcing” to help women living in violent, poverty-stricken places.

Abrahams’s stress is already mounting. She has a safe place at the Saartjie Baartman centre until April next year, but then she will have to return home.

Her eldest son is homeless, sleeping in the same street where she lives. She wants a rehab centre to take him in, but nobody has yet been able to help her.

“Before he used drugs, he was good in school. I adored my son,” Abrahams says. “I don’t want to live my life like this forever. I want to be free from abuse.”

* Names have been changed to protect identities.