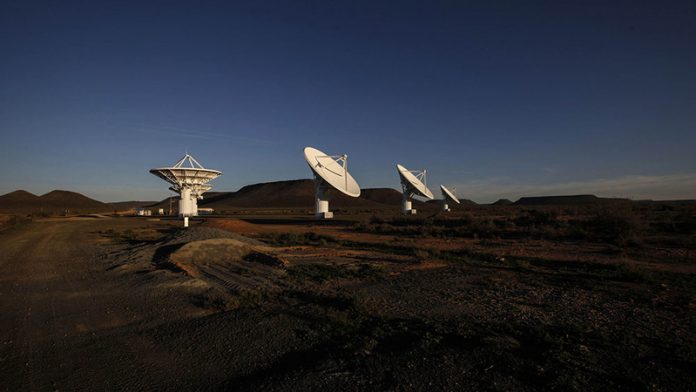 Rows of racks hum in an underground bunker, hidden from the sun and the sensitive radio antennae that dot the desert landscape in the Northern Cape.

All the processing capacity for South Africa’s Square Kilometre Array (SKA) precursor telescope, Meerkat, has to be buried so that it will not interfere with the dishes that will detect radio signals from space.

The 64-dish Meerkat will produce about 2.5 terabits a second, all of which will have to be correlated and processed before it is sent to Cape Town, by optical fibre, for analysis.

Enter Skarab, the technology that will achieve this. Skarab, which stands for SKA Reconfigurable Application Board, is based on a field-programmable gate array.

It was designed and is manufactured by South African company Peralex.

Radio astronomy has historically been at the forefront of signal processing innovation. Radio antennae collect the radio signals from celestial objects, convert them from analogue into digital signals and then correlate and process them, before this data is visualised and analysed.

Unlike optical telescopes, which only operate at night, radio telescopes collect data 24 hours a day, which must be processed as it is received.

The SKA – which will comprise thousands of antennae in Africa and Australia, with its core in the Northern Cape – will be the largest radio telescope in the world, and South Africa’s MeerKAT will form part of its skeleton.

The computing power does not exist to process the data that will pour out of these dishes. According to the international SKA organisation, the project will need central supercomputers capable of more than 100 petaflops of raw processing power. The full SKA is expected to come online in 2024.

Each innovation in processing takes the project closer to that goal.

“[Skarab] is essentially the evolution of Roach,” says Francois Kapp, the digital back-end subsystems manager on the Meerkat project.

The Roach (reconfigurable open architecture computing hardware) board is the result of a collaboration between SKA South Africa and the University of California, Berkeley.

The first Roach board, Roach-1, was used in South Africa’s seven-dish prototype, KAT-7, which is also on the Northern Cape site.

“Roach-1 was a collaboration,” Kapp says. Roach-2, the next generation, “was mostly designed here, and Skarab is a completely South African design”. Skarab will be used in the Meerkat, whose final dish is expected to be erected in 2017.

According to SKA South Africa, Roach-2 has five times the processing capacity of its predecessor, four times the memory bandwidth, twice the memory capacity and twice the input/output bandwidth.

Skarab is even faster. “It can be used for very data-intense computing,” says Peralex director Alex Bassios. Peralex won the open tender to design and manufacture the Skarab for the MeerKAT, estimated at about R39?million.

“It’s the next generation of Roach, and much more powerful,” Bassios says. Although Peralex worked closely with SKA South Africa, the high-tech company did all the design work.

One of the differences between Skarab and the Roach boards is the hybrid memory cube, which is based on 3D stacking and reduces the space pressure on the board.

Asked how megaprojects like this affect South Africa’s high-technology industry, Bassios says: “It is allowing very good South African companies – and not just ourselves – to apply our knowledge in the local environment. In the past, we’d mostly export [this technology]. The SKA is providing the critical mass for the industry to work.”

Subcontractors also “have to upskill to meet the quality of [SKA South Africa’s] needs”, he says.

Peralex will produce 300 Skarab boards for Meerkat, and then “Peralex can sell to other people in a similar way that Roach-1 and Roach-2 were”, Kapp says.

Although these processing boards are being used in other radio astronomy facilities around the world, there are other applications, Bassios says. “It can be used in radar, in high-frequency trading, in anything that needs very quick decision-making and processing.”