Why Afrikaans doesn’t qualify for special treatment at universities 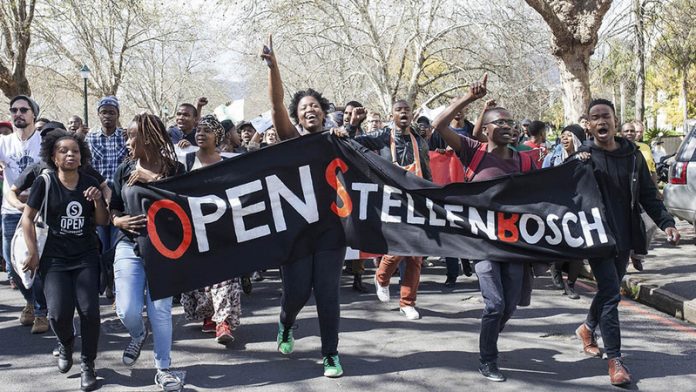 The Afrikaans language is widely used: it is the third most commonly spoken of South Africa’s 11 official languages, after isiZulu and isiXhosa. But it has a torrid history. It has not, two decades after the end of apartheid, shaken off its association with that system. Its critics argue that it continues to have a racially exclusionary impact in, for example, Afrikaans language universities. Its defenders strongly fight for the language’s place in the South African higher education sector.

Those opposing the change at Stellenbosch have invoked the country’s Constitution, saying it guarantees everyone education in their mother tongue. This suggests that Afrikaans-speaking communities have a constitutional right to demand tertiary education in Afrikaans. This line of argument also holds that a public university like Stellenbosch must maintain the privileged status of Afrikaans, or at least afford it an equal status with English.

In our view, the assumptions underlying these arguments are false. This becomes apparent when examining the actual content of the Constitutional right concerning language in education. It is also crucial to interpret this right in the context of the Constitution’s overall purposes and values.

Section 29(1)(2) of the Constitution reads: Everyone has the right

Everyone has the right to receive education in the official language or languages of their choice in public educational institutions where that education is reasonably practicable. To ensure the effective access to, and implementation of this right, the state must consider all reasonable educational alternatives, including single medium institutions, taking into account:

This provision does not guarantee the unqualified right to mother tongue education. It also doesn’t preclude the existence of single medium institutions. And, importantly, it sets out very specific factors the state must consider in implementing the right. These are equity, practicability and the issue of redress.

Equality and social justice are the Constitution’s founding values. It defines equality as including

“the full and equal enjoyment of all rights and freedoms.”

This means that the right to higher education must be equally accessible to all without any form of unfair discrimination. It must be delivered in a way that allows everyone to participate equally.

This is not only a constitutional imperative. It is core to the teaching project of any excellent university. A diverse body of staff and students enables exposure to a variety of world views and experiences. It is vital to the creation of new forms of knowledge and learning. If a language policy in any way undermines the creation of a diverse, inclusive campus community it impoverishes a university’s academic life.

Educational institutions, whether they are schools or universities, should not function as static and insular entities. The broader community’s interests must be taken into account, especially in light of the Constitution’s values. The Constitutional Court made this clear in an important judgment about language policy in public schools.

“Practicability” in tertiary education includes a range of considerations like budgetary constraints, the availability of staff to teach in particular languages of choice, learning infrastructure and students’ language preferences.

Academics and university managements cannot simply ignore the reality that growing numbers of students choose to be educated in English even when this is not their mother tongue. In our discussions with students at Stellenbosch University, two reasons have been offered in support of English as the medium of instruction.

Firstly, it is a common language which enables shared communication both in the classroom and in extra-curricular activities, residences and campus social environments. It is also the de facto language of business, politics, academia and law in South Africa and globally. A solid command of English is essential to graduates’ future careers and their ability to function effectively in a transformed South Africa as well as multi-cultural global environments.

The second reason may be more difficult for sections of the Afrikaans community to come to terms with. This relates to the language’s history and its continued association with the apartheid era. More than 20 years into the democratic dispensation, black students continue to testify to their painful experiences of Afrikaans being used on Stellenbosch campus, in residences and in the town to exclude and marginalise them.

This is particularly relevant to Stellenbosch University. The institution, many of its academics and former students contributed to the ideological, political and economic underpinnings of apartheid. It did not challenge the injustices of apartheid.

The pace of racial change and redress at the institution has been glacially slow since democracy dawned in 1994. As far as the Constitution’s demands are concerned, there is still much to be done at Stellenbosch University to ensure open and free access to tertiary education. This will not happen by entrenching the language-dominated patterns of past privilege. It will be driven through changes and reforms to open up the institution to a diverse body of staff and students.

The admission of substantially more black students and the appointment of more black staff must be the highest priority. This is not only to help create a diverse campus community but because it gives effect to the constitutional imperative to redress the racial injustices of apartheid.

The university’s language policy must support and promote this fundamental constitutional objective, not constitute a barrier to it. All indications are that this objective will not be achieved without a significant shift towards English as the primary language of both teaching and official interaction at the campus.

Stellenbosch University’s management team is trying to create a language policy that will offer pragmatic, sound solutions to this complex set of issues. It is working with academic staff who are experts on language and education, and in consultation with a broad range of student bodies. This makes sense. Academic staff at a particular institution are best placed to understand their students’ needs, teaching principles in specific disciplines and institutional constraints.

This is presumably why the Higher Education and Training Act does not give university councils exclusive jurisdiction to determine language policy, as is often mistakenly believed. It requires that such policy be made with the concurrence of university senates – that is, bodies made up primarily of academics.

Similar work is underway at another historically Afrikaans institution, the University of the Free State.

These approaches are by no means perfect. But they are precisely the kind of reasonable, pragmatic endeavours which we believe deserve support and further engagement – not the condemnation coming from sections of the Afrikaans community.