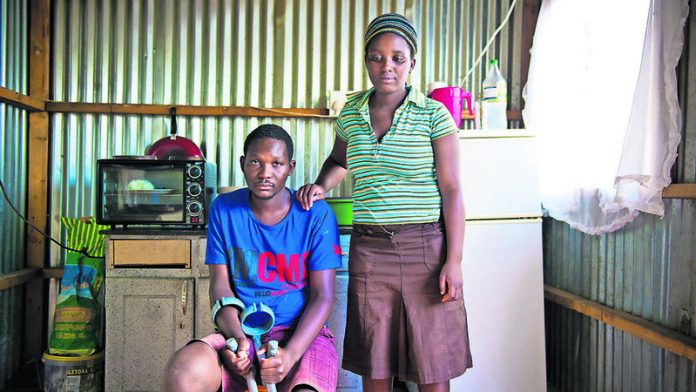 On the first Thursday of November, 23-year-old Tawanda Mutsvene bundled his equally young partner, Definite Chivanga (22), into an early morning taxi. The pair were notably different from the other rush-hour commuters because Chivanga was in labour – not that anyone in the taxi noticed.

Their immediate family was about to increase by one-third, with the addition of its first South African.

Zimbabweans Chivanga and Mutsvene met in high school and dated during their O levels, the equivalent of grade 10. Years later they rekindled their love on Facebook and stayed in touch, even when they independently left their homes in Zimbabwe, Mutsvene in 2013 and Chivanga in 2014, in search of better economic prospects. They got together in South Africa.

The well-kept back room the pair rent in Eldorado Park in Soweto is spotless, but has little to recommend it other than location: it is close to the sprawling Chris Hani Baragwanath Hospital, which, for all its well-documented problems, remains a well-equipped place to give birth.

The taxi ride to the hospital was brief and uncomplicated, but Chivanga’s labour was not. More than a day later, at 11am on Friday, she gave birth by caesarean section to what the couple still refer to only as “the baby”, or “our son”. “We hadn’t named him yet. We wanted to name him when the baby came, because we didn’t know if it was a boy or girl,” says Mutsvene.

Though weary and dazed, Chivanga says she still remembers the cries of her son moments after his birth. “I heard him crying and then they showed me the baby … he was crying.”

A timid Chivanga struggles to speak in English, and does so with a heavy accent. She speaks Shona and Mutsvene typically translates it into English (with a slight stammer on his part) for her when necessary. She has difficulty not only in speaking English but also in understanding it – something that would later turn out to be crucial.

Chivanga did not get to spend any time with her son – he was whisked away for assessment. Later that day, Chivanga says, “the doctor who delivered the baby came to me and said the baby had been sick but was getting better and was in the nursery”.

Still tired and drained, Chivanga was only ready to meet her son properly and feed him for the first time the next day.

“I remember well, I came to see Definite and the baby on Saturday after coming from work,” Mutsvene says. “The nurse brought the baby, to ward 64, bed 11, for Definite to breast-feed the baby. That’s when I saw the baby for the first time.

“When the nurses come to give you your baby, they call out your name, which is on the baby’s tag. They called Definite Chivanga three times” before she realised that the badly mispronounced surname was actually hers.

As the pair tells it, the meeting was a happy one. “Definite was mocking me, saying that the baby had my ugly feet,” Mutsvene says. “We were laughing. I could see that he had the same lines and the same kind of heels I have. You see, like here,” and he points to a recently injured foot.

That afternoon, Chivanga, accompanied by a nurse, was walking to the nursery to feed her son again when she fainted. That detail, too, the couple would later consider crucial – but only after an utterly unexpected phone call.

“At 11, I received a call in my ward telling me that my son had passed on at Rahima Moosa [Mother and Child Hospital],” Chivanga says, seeming almost stunned by the weight of the memory.

The hospital letter of transfer, which allegedly had the wrong tracking number. (Photos: Delwyn Verasamy, M&G)

Mutsvene has the grim outlook not uncommon to immigrants. “Death can visit anyone at any time,” he says. But he was flabbergasted to be told his son had died not in the hospital where he had been born but about 15km away at the specialised hospital.

With no paperwork, such as a birth registration form, Mutsvene started asking questions, first at Baragwanath. “We went to Bara, on Sunday, and asked the nurse who was taking care of Definite where our son was? And how did he die? She was shocked and said, ‘He’s dead?’

“The nurses there at ward 64 told us to go to ICU [intensive care unit].”

There a nurse phoned Rahima Moosa and confirmed the child had been transferred to that hospital on Friday – the day before mother and father spent time with what they firmly believe was their son – and died.

That was not the only discrepancy.

Professor Ashraf Coovadia, the head of the paediatrics and child health department at Rahima Moosa, says: “There were two major concerns that the parents had. The one concern was: Who was the baby they saw in Baragwanath that Saturday if their baby had been transferred on Friday?”

The other issue, he says, was a mismatch between tracking numbers on the armbands of mother and baby, and on a hospital transfer letter.

But it was the visual identification that convinced the parents that there had been some terrible mistake.

“The baby did not look like the baby we saw on Saturday,” says an adamant Mutsvene. “Ours was dark in complexion and the one they showed us was not, and he looked bigger than ours.”

With no explanation they could accept from either hospital, the two went to the Diepkloof police station and made a sworn affidavit, which was subsequently sent to the Zimbabwean consulate.

The official version of events differs from that told by the couple.

A T-shirt meant for the baby.

The baby had to be resuscitated after birth, Coovadia says, a procedure that was successful. The only bed in a neonatal intensive care unit available in the local cluster of medical facilities was at Rahima Moosa, so the baby was rushed there.

Meanwhile, back in the postnatal ward at Baragwanath, the situation was explained to Chivanga.

“The doctor went to the post-natal ward and spoke to the mother, and said, ‘Your baby needs to be transferred to Rahima Moosa,’” Coovadia says, because the ICU at Baragwanath did not have the necessary ventilator available.

The doctor spoke to Chivanga in English. “And his impression was that she understood what he said, maybe because she nodded. It could be that it was a breakdown in her understanding, or that we could not communicate effectively,” says Coovadia.

Chivanga recalls a conversation with the doctor who delivered the baby, but she thought the crux of the conversation was that her baby had been sick but was now better, and had been placed in the nursery.

According to the National Health Act, any healthcare provider must, when possible, use a language a patient understands and must take into account a patient’s level of literacy. Healthcare workers say the application of these rules often falls short. Miscommunication is common, though not often with such a serious result.

The baby arrived at Rahima Moosa at about 6pm. There, Coovadia says, a registrar “immediately” called Baragwanath to verify the identity of the child because the number on the tag on the baby’s leg did not correspond with the letter authorising the transfer. But the queries were ultimately satisfied.

“We have no doubt, from both the hospitals’ side, there is no doubt that this is their baby,” says Coovadia.

Could the parents have been given the wrong baby at their first meeting? Nobody knows. The chances, officials say, are slight, and that would be a breakdown in policy and procedure, but it is not entirely impossible.

“I wanted to see the face. I wanted to see his tag and his feet but, before I could even say anything, Definite said to me that this is not my baby, in Shona,” Mutsvene says. “His face didn’t look like the baby we had seen on Saturday.”

A hospital driver, Mutsvene says, told the pair that a DNA test could be arranged – but it would cost them R3 000, and they would have to pay double should the results show that the body of the baby was theirs. With little trust remaining, the couple refused to provide a sample for a test.

“The only way to find out if this is my baby is the DNA,” Mutsvene says, but “we want an independent DNA test done because I don’t know if they might forge the results or something”.

If an independent test finds that the body is indeed that of his child, Mutsvene says, “I will have to accept it. But if it’s not, I want my baby. Even though I’m poor, I want my baby here with me. It’s my family.”

The Centre for Child Law and the Mail & Guardian are helping Chivanga and Mutsvene obtain an independent DNA test.