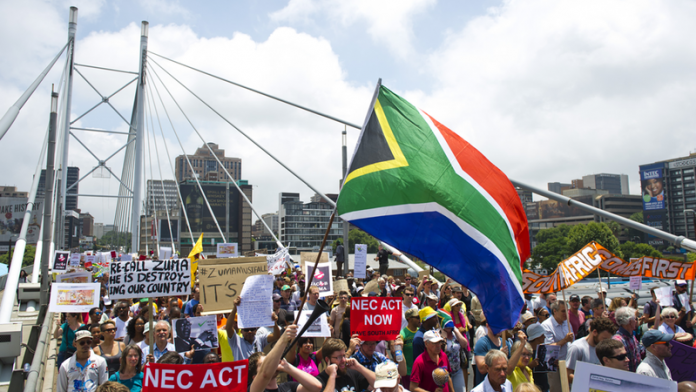 Parliament, and the African National Congress in particular, will have to brace itself for protests during the State of the Nation Address (SONA) in February next year if the ANC fails to recall President Jacob Zuma.

That was the warning shot fired by former Cosatu general secretary Zwelinzima Vavi on Wednesday, as an estimated 3 000 people gathered in the Johannesburg CBD to march under the #ZumaMustFall campaign.

In between loud approving cheers and applause from the crowd, Vavi also made the following demands:

Vavi said should the ANC fail to bow down to these demands, people will be mobilised so they can occupy Cape Town next February because the country can no longer afford to be under Zuma’s thumb.

A spirited crowd shouted “Vavi! Vavi! Vavi!” in between chants of “Zuma must go!” and “Phansi ngoZuma phansi!”.

The march, organised by the Unite Against Corruption (UAC) coalition, attracted representatives from various civil organisations, trade unions and political parties, some of whom gave speeches lamenting Zuma’s leadership.

Peaceful but lively demonstrators gathered at the foot of Bertha Street before marching across the Nelson Mandela Bridge carrying anti-Zuma placards. Posters were spotted depicting slogans such as “Recall Zuma now”, “Zoom Zuma out of office,” and “After 2 Zuma terms the nation needs a shower,” amongst others which the protestors waved with pride as they sang anti-Zuma songs and danced over the bridge.

Marshalls, police and traffic authorities were effective in keeping an eye over proceedings and the unexpected arrival of Congress of the People leader Mosiuoa “Terror” Lekota pleased the crowd, who later cheered him on when he addressed them saying: “Zuma must go now. If the ANC doesn’t act they must never be voted for ever again.”

Speaking on behalf of the UAC, Steven Faulkner told the Mail & Guardian that overall they were pleased with the event, especially as it had been organised over a six-day period.

Correction: A previous version of the story said that Zwelinzima Vavi warned that that SONA would be disrupted but in fact he said that #ZumaMustFall supporters would be protesting while the president’s address was under way, not disrupting it.